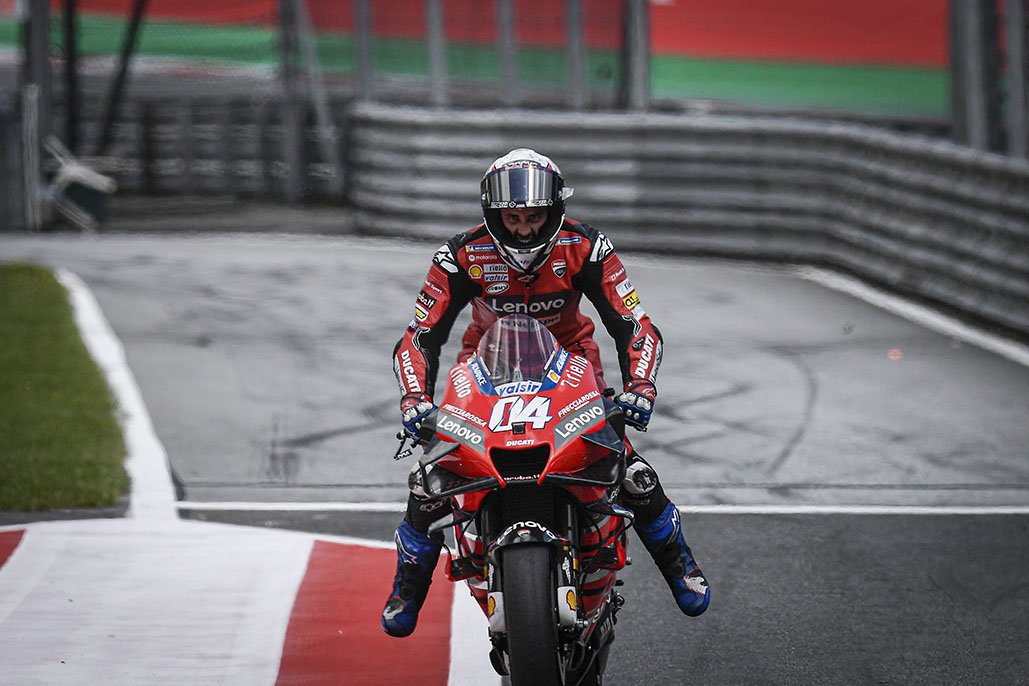 It’s now five in a row for the Bologna bullets at the Red Bull Ring, but can that become six this weekend? Their rivals will be gunning to make sure it won’t…

From a worst ever qualifying for Andrea Dovizioso (Ducati Team) and tough race day in Brno, it seemed unlikely that Ducati would be able to keep their 100% winning record at the Red Bull Ring on Sunday, but keep it Dovizioso did. Giving the Borgo Panigale factory their 50th MotoGP™ win, the Italian turned the screw lap by lap to cross the line with a little breathing space, writing himself another chapter in Ducati lore and moving back up to second overall in the standings. The devil is in the details and that’s what Dovizioso cited as the secret – the work done over previous visits – to the turnaround from Brno. That won’t be going anywhere, so the number 04 must remain the favourite heading into the BMW M Grand Prix of Styria. Which is automatically another milestone for whoever wins, because it will be the 900th premier class race.

Although Dovizioso won, it was Jack Miller (Pramac Racing) who initially led on Sunday and the Australian could prove both a dark horse and another who threatens to keep that Ducati record intact as we take on the Red Bull Ring again. Ending the race so close to second, he could be ruing his tyre choice on the restart – Dovizioso even said point blank he should have stayed on the medium front, not changed to the soft – and there are a few more things for the Queenslander to mull over too. If he can bring those together, can he threaten? Danilo Petrucci (Ducati Team) will be hoping to move forward as well; already a race winner on Borgo Panigale machinery but struggling with a tougher 2020 so far.

The real dark horses on Sunday were Suzuki and KTM, however. Joan Mir (Team Suzuki Ecstar) took his first premier class podium as the Hamamatsu factory – not traditionally having been a threat at the Red Bull Ring – emerged as serious contenders. After some tougher races for Mir it will have been a welcome return to the front, and nothing could be better than returning to the venue to try and do it again. Alex Rins (Team Suzuki Ecstar) too, despite still recovering from his shoulder injury, showed some serious speed and even took the lead – before sliding out – but the Suzukis will be cause for concern for many hoping to take to the rostrum…

So too will KTM, despite the fact that Sunday didn’t quite turn out to plan. Pol Espargaro (Red Bull KTM Factory Racing) seemed the favourite on FP4 pace alone, and he led on the first start before the Red Flag came out. After that it was a tougher prospect, and ultimately it ended in disaster as the Spaniard and fellow KTM rider – Miguel Oliveira (Red Bull KTM Tech 3) – came together and both crashed out, an incident about which there will be hearings with the FIM MotoGP™ Stewards on Thursday. But both were quick, and second time around they will be expecting to be frontrunners again.

That role for the Austrian factory was left, after that incident, to Brad Binder (Red Bull KTM Factory Racing). 17th on the grid for the first start, it had been a tougher weekend for the rookie after his stunning ride to victory in Czechia. But he was unflappable, moved up before the Red Flag, made the most of a better starting position second time round and came home in an incredible fourth place – with a whole host more experience of the track on a MotoGP™ machine that he’ll now be looking to put to good use a week later. Iker Lecuona (Red Bull KTM Tech 3) will want to do the same in terms of what he’s learned from the track too, having taken his best finish yet in the Austrian GP.


For Yamaha, it’s still somewhat difficult to tell what will await them this weekend. Maverick Viñales (Monster Energy Yamaha MotoGP) and Championship leader Fabio Quartararo (Petronas Yamaha SRT) qualified on the front row and then – even aside from the shock of the huge crash at Turn 3 that dominated the headlines – also suffered a mechanical problem early on the restart and a run off in the initial race, respectively, giving them both more of an uphill struggle once the lights went out for the second time. But both impressed to make the best of it, with Quartararo steadily heading forwards and Viñales initially forced backwards by his problem before slicing back through half the field by the flag.

Impressive is also a word for Valentino Rossi (Monster Energy Yamaha MotoGP), who is a little behind in the title fight after his DNF in the first race at Jerez, but whose consistency since is starting to really rack up. He came fifth and was top Yamaha, so even as we await eagerly what they can do in the race against the rest, it was also be an interesting one to see who comes out on top for the Iwata marque too. Franco Morbidelli (Petronas Yamaha SRT), one of the riders involved in the crash that brought out the Red Flag, was also still very much in that battle near the top at the time – so what can he do second time around at the Red Bull Ring?

Honda will be asking the same question, with the second race at the same venue likely a positive for them. Takaaki Nakagami (LCR Honda Idemitsu) was the lead Honda, taking sixth for yet another solid performance as he makes his presence felt in 2020, and the experience is even more valuable for rookie Alex Marquez (Repsol Honda Team) and test-rider-turned-reigning-Champion-replacement Stefan Bradl (Repsol Honda Team). Cal Crutchlow (LCR Honda Castrol) will want more too as he recovers from a broken scaphoid, and that’s something that will also be affecting Johann Zarco (Esponsorama Racing) now.

The Frenchman was one of the riders, along with Morbidelli, involved in the crash that brought out the Red Flag – and both will be having hearings with the Stewards on Thursday. But for Zarco focus will first be on his broken scaphoid discovered after the crash, for which he’ll have surgery ahead of the event. Crutchlow raced under similar circumstances so it’s possible, but it will likely dent the Esponsorama rider’s chances of being in the same place in the battle at the front second time around. What can he do?

Finally, can Aprilia move forward? Both Aleix Espargaro (Aprilia Racing Team Gresini) and teammate Bradley Smith scored points in the Austrian GP, which was a key positive, but on paper the track should be a better prospect for them. Will that see them take a step forward in the BMW M Grand Prix of Styria? We’re about to find out.

Ducati remain undefeated, Dovizioso undaunted and the Red Bull Ring the near-perfect layout for the Borgo Panigale factory. But MotoGP™ is as unpredictable as ever in 2020, so can anyone dethrone Ducati this weekend? Find out as FP1 starts on Friday at 9:55 (GMT +2), before the lights go out for the race at 14:00 on Sunday.