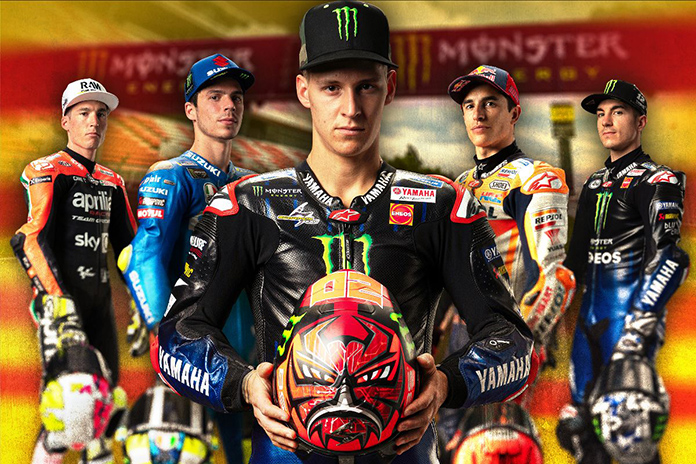 Barcelona has been happy hunting ground for the Frenchman, but the grid are reset and reloaded to try and derail his roll

Not since 2016 have Yamaha won at Mugello, but Fabio Quartararo (Monster Energy Yamaha MotoGP) put in a stunner last time out to take back to the top step and make it four Yamaha wins in the first six for the first time since that very same year. Joining him on the podium, for the first time since 2014 at the Italian track, there was no Ducati. The form book took a twist and instead it was Red Bull KTM Factory Racing’s Miguel Oliveira putting the cherry on top of an impressive weekend for the Austrian factory, and reigning Champion Joan Mir (Team Suzuki Ecstar) getting back on the rostrum. Now, as the paddock heads for Catalunya – and a new Turn 10 – what can we expect?

As ever… Quartararo. The Frenchman won last year at the venue despite a late charge from a Suzuki train headed by Mir, and it’s where he was on pole as a rookie and took his first premier class podium. Now recovered from arm pump surgery and back to his best, the Frenchman must surely arrive as favourite. But teammate Maverick Viñales, who said they lost their way with the bike somewhat on his side of the garage after his stunner in Qatar, will be aiming to stem the flow of momentum and get back alongside el Diablo at the front, and Franco Morbidelli (Petronas Yamaha SRT) will be looking for a less dramatic start to his race to claw back his impressive earlier form in 2021 too. And can Valentino Rossi (Petronas Yamaha SRT) get further into that top ten?

2020 at the track plus a podium last time out teases that the biggest threat may be Mir, however. Both he and Team Suzuki Ecstar teammate Alex Rins had some serious speed at Mugello, and the reigning Champion and his teammate completed the podium in Barcelona last year. Are we now on to the promised better venues Mir cited earlier in the season? And are we about to see that same metronomic brilliance at slicing through to the front appear week in week out?

Rins, meanwhile, is more a man looking for redemption. After speed and progress to the front in the last few, crashes have then ended the Spaniard’s races and he’s left with a mountain to climb. Having shown how fast he is in the latter stages of 2020, if Rins can stay on he’ll be another name to automatically add to the podium fight… and that added to his rostrum at the venue last year.

At KTM though, the trajectory is already back on the up after an incredibly impressive charge in Italy. The Austrian factory didn’t come out the blocks swinging with the same armoury as 2020 earlier this year, but it surely would only have been a matter of time… and Mugello says yes. It was not only another podium, but also another top five for the second KTM across the line as Brad Binder (Red Bull KTM Factory Racing) equalled his best of the year so far despite never having ridden Mugello in MotoGP™ before. A new chassis and some serious juice were on show as Binder even equalled the top speed record too… where will they shuffle into the fight in Barcelona? Can that form continue?

Ducati, meanwhile, arrive from a slightly more muted weekend. It was supposed to be their turf at Mugello, but with Francesco Bagnaia (Ducati Lenovo Team) crashing out early on after having been the fastest Borge Panigale machine, it was left to Johann Zarco (Pramac Racing) to pick up the baton. And he put on a real show duelling Quartararo early on, before then just slipping from the podium places into fourth. He’s second in the standings, however, and is always a threat. His teammate Jorge Martin also returns from injury this weekend, so that’ll be something to keep an eye on in the Pramac garage.

So what of Jack Miller (Ducati Lenovo Team)? The Queenslander can’t be counted out either, despite a more solid Italian GP compared to his stunners preceding it. But he was happy with good points and being near the front to the finish, with a record at Mugello that hadn’t been kind. Will Barcelona see Miller bring it back to the fight for the podium?

At Honda, that fight for the podium remains the goal. After some impressive pace at times, it’s not fully come together yet in 2021, although Takaaki Nakagami (LCR Honda Idemitsu) has been fourth, equalling his best. Marc Marquez (Repsol Honda Team) remains under the microscope as the eight-time World Champion continues his return, teammate Pol Espargaro (Repsol Honda Team) is still finding his feet and Alex Marquez (LCR Honda Castrol) hasn’t quite had the form shown last year yet. For all three though, it’s familiar and true home turf… and they’ve got some impressive CVs at the venue. Can they reset and impress once again at the Circuit de Barcelona-Catalunya?

Aprilia Racing Team Gresini, meanwhile, continue their roll in 2021, with Aleix Espargaro leading the charge. And last time out may have been home turf for the factory, but this time it’s home turf for him as he hails from right next to the track. With a good record there and continued momentum, what can the Noale factory do in Barcelona?

The gap for Quartararo in the points is now more substantial, but it’s not yet a whole race win. So one Grand Prix is all that that could turn it on its head. Will that happen in Barcelona or will the Frenchman continue his catch me if you can? We’ll find out in the Gran Premi Monster Energy de Catalunya, with lights out for the MotoGP™ race at the earlier time of 13:00 (GMT +2).