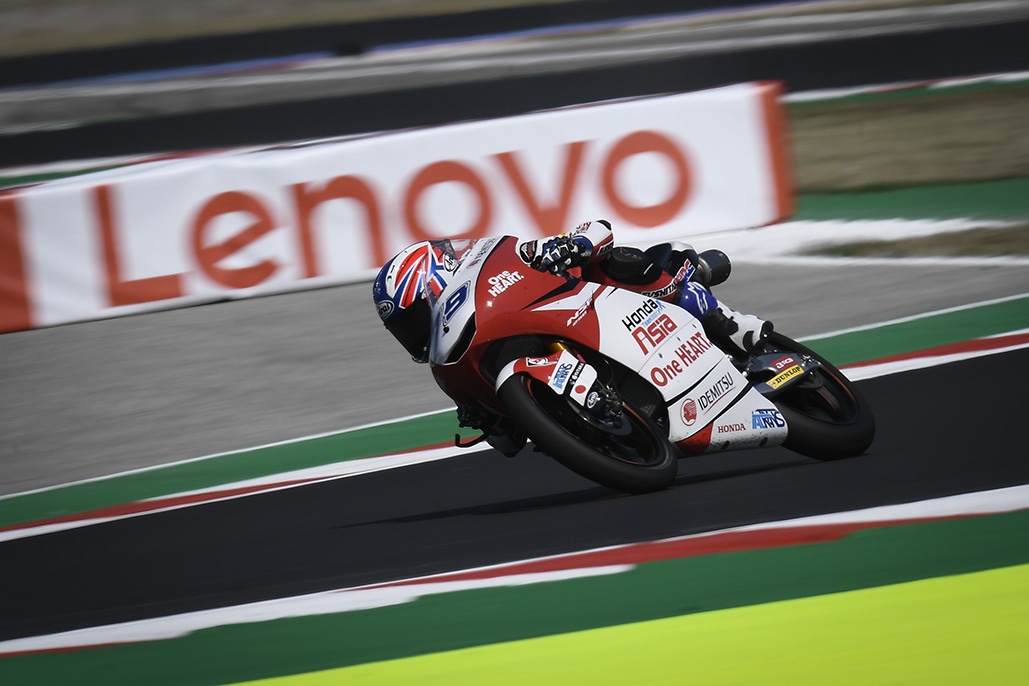 It’s been a tougher time for the former Championship leader of late. Now Ogura is in the hot seat, and Arenas will need to dig deep to turn the tables…

Since the very first race of the season, Albert Arenas (Gaviota Aspar Team Moto3) has been the man in charge in Moto3™, but no longer. After a crash, a fourth place and another crash – the latter not his fault – the number 75 now finds himself demoted to second overall and needing a fight back. Ai Ogura (Honda Team Asia) is the new Championship leader, although it was far from plain sailing for the Japanese rider last time out either. So what will Le Mans bring?

For Arenas, a little pressure is certain, but there will also be a host of incredible memories. There’s hardly a better venue to return to when you need a boost than the place where you took your first win, and that’s exactly what the number 75 did at Le Mans in 2018. So he knows it’s a place he can conquer, and he’ll be guns blazing to do it again to take some revenge on his bad luck in Barcelona.

For Ogura, the past form book isn’t really the place to look to know what he’ll have in the locker come race day in France, as he’s only in his second year in Moto3™. Last year at Le Mans when he was a rookie though, he qualified on the front row… so he has speed. The number 79 was somewhat AWOL at Barcelona and even with an open goal after the crash for John McPhee (Petronas Sprinta Racing) that also took Arenas down, he was only able to take eleventh. But he didn’t crash. And so far this season, he’s got more podiums than anyone, so it’s hard to bet against the Japanese rider being back in the battle. His advantage is just three points overall, but consistency is key and Ogura has shown that in spades throughout 2020.

For McPhee, meanwhile, it’s another bounce back to pull out the hat, although if you’re going to crash out of a race in which you need to score big to gain ground, taking the Championship leader down with you is one way of making your maths a little less disastrous, even if it does ruin his. That mistake – for which the Scot immediately went to apologise – and the knock-on side effects keep McPhee only 24 points off the top, and he’s is another who arrives in France with great memories. Guess who won at Le Mans last year? That’s right. The last two races in Sarthe have been won by Arenas and then McPhee, adding another interesting little twist into the equation as they both arrive as title contenders.

The battle at the front is never a three-way fight in Moto3™ though. Darryn Binder (CIP – Green Power) arrives as a Grand Prix winner and will want more of that, Tony Arbolino (Rivacold Snipers Team) is on a roll of form and closing in on the top, and Celestino Vietti (Sky Racing Team VR46) is only a further point back on his compatriot too. Barcelona also saw Romano Fenati (Sterilgarda Max Racing Team) retain his position in the front group after his win at Misano, and there was a resurgence for a few including his teammate Alonso Lopez, SIC58 Squadra Corse’s Niccolo Antonelli, Estrella Galicia 0,0 rider Sergio Garcia, Dennis Foggia (Leopard Racing) and teammate Jaume Masia… the list could go on, with more riders than can score points sometimes fighting it out in the front group, but that’s what makes Moto3™ such an incredible spectacle.

That’s a good reason to tune in when the lightweight class take on Le Mans, with the race getting underway at the slightly later time of 11:20 (GMT +2). Can Arenas strike back? Will we see the return of McPhee? Or will the rise of Ogura only continue once he’s back in the groove? Find out on Sunday!