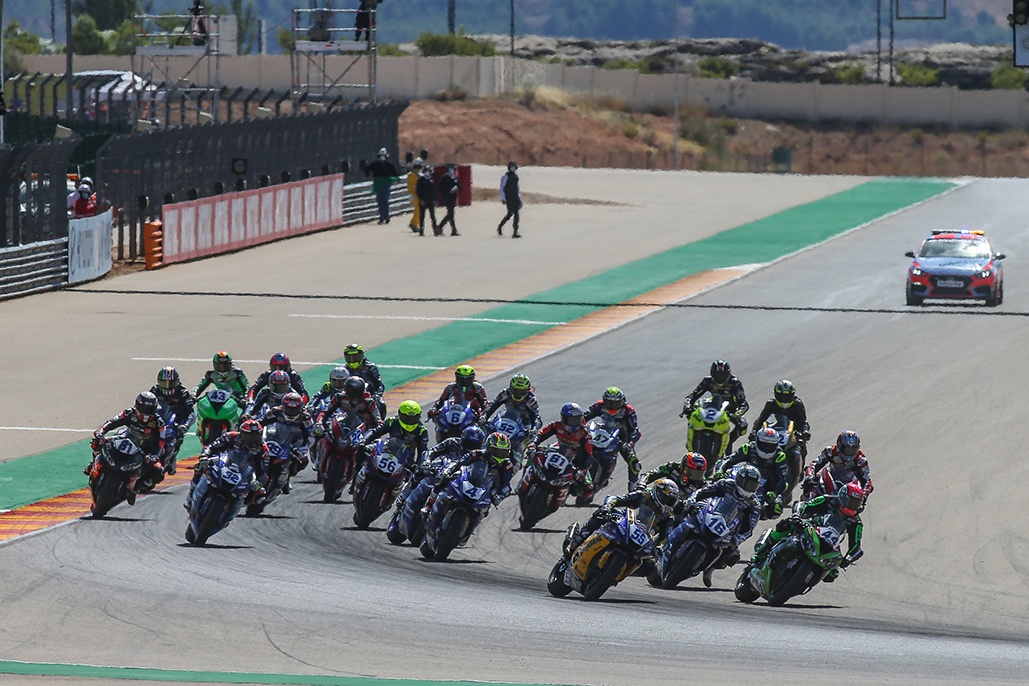 Another back-to-back race weekend in FIM Supersport World Championship but the same circuit with MotorLand Aragon hosting the Pirelli Teruel Round.

The FIM Supersport World Championship action comes thick and fast with a second round at MotorLand Aragon. A familiar circuit to everyone on the grid following the first weekend at Aragon, the Pirelli Teruel Round should be full of excitement and action throughout the weekend as riders look to close in on the Championship leader.

Andrea Locatelli (BARDAHL Evan Bros. WorldSSP Team) goes into the Teruel Round having won all seven races in 2020 following a double success at MotorLand Aragon. The Italian rookie, who moved across from Moto2™ for the 2020 season, has claimed every pole position, fastest lap and race win in 2020 and will be looking to continue that success with more victories at the Teruel Round. Locatelli goes into the round with a 45-point Championship lead and will be looking to build on that throughout the round.

Locatelli’s nearest rival in WorldSSP is Jules Cluzel (GMT94 Yamaha) after the Frenchman secured two more second places in the Championship meaning he has now scored six second places out of seven in 2020. Cluzel has shown remarkable consistency to secure so many second-place finishes and will be looking to go one better and end Locatelli’s remarkable run. Will he stand on the top step of the podium at Aragon?

Lucas Mahias (Kawasaki Puccetti Racing) lies third in the Championship after claiming two more top-five finishes at MotorLand Aragon as he lost ground on the riders in front of him. Mahias showed strong pace in the early stages of the race to fight with Locatelli and Cluzel but fell back as the race progressed. Mahias will be hoping he can fight for a longer period throughout the two races during the Teruel Round.

Philipp Oettl (Kawasaki Puccetti Racing) has moved up to fourth place in the Championship following a podium and fourth place at the Aragon Round; the German rider looking to continue his impressive form at MotorLand Aragon. Oettl has two podiums in 2020, both third places, and will be looking to add to his podium count with two more races at Aragon.

Corentin Perolari (GMT94 Yamaha) lies fifth in the Championship following the Aragon Round where he finished in tenth place and seventh place; losing out to Oettl in the Championship as well as losing ground to those chasing him. With a podium to his name in 2020, at the season-opening Australian Round, will Perolari be able to return to the rostrum and maintain his fifth place in the standings?

One rider who will go into the Teruel Round full of confidence is Danny Webb (WRP Wepol Racing) after securing his best result of the season in Race 1 at MotorLand Aragon with ninth place, before matching that in Race 2. Hannes Soomer (Kallio Racing) will be looking to bounce back from a disappointing Aragon Round where he retired from both races after showing strong pace in Tissot Superpole to start from fifth place. Another rider who will go into the Teruel Round on a high is Peter Sebestyen (OXXO Yamaha Team Toth) after the Hungarian rider secured his best ever starting spot with ninth place in Tissot Superpole, converting that into a points finish in Race 2 after a battle with Webb, Manuel Gonzalez (Kawasaki ParkinGO Team) and Federico Fuligni (MV Agusta Reparto Corse).