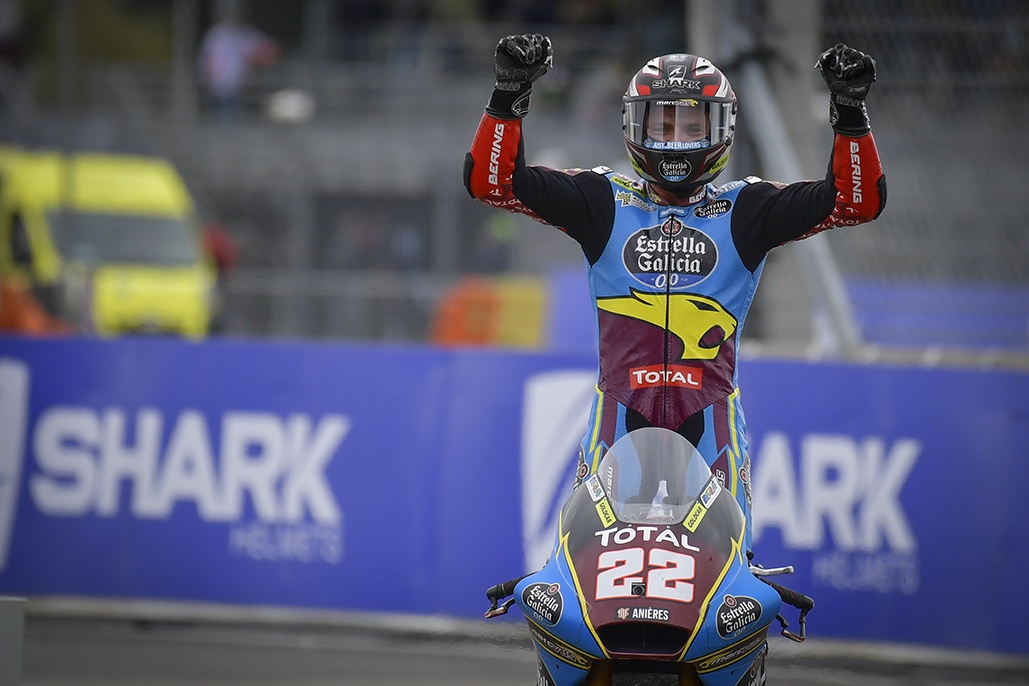 The Brit just won for the first time since 2016, when he last did it at… you guessed it! Aragon. And now he’s only an apt 22 points off the top.

Since the season re-started in Jerez, it’s been a bit of an Italian invasion in the Moto2™ class. And, despite a tougher race last time out, it remains Luca Marini (Sky Racing Team VR46) on top in the standings – with Enea Bastianini (Italtrans Racing Team) now just 15 points down and Marco Bezzecchi (Sky Racing Team VR46) only a further five. But the man with the momentum and the winner last time out, Sam Lowes (EG 0,0 Marc VDS), now arrives at a venue that’s treated him well – and he’s looking to continue his roll.

There was heartbreak for Jake Dixon (Petronas Sprinta Racing Team) that played into Lowes’ win late on in France, with the gap behind the duo monumental by then, but it’s not just one win that makes the number 22 suddenly headline-worthy. Lowes has now taken three podiums in a row for the first time since 2016, and one was a victory for the first time since the same year – when he rather aptly did it at MotorLand. He’s the only rider on the grid to have taken to the top step at the venue in Moto2™, as well as one of only four who’ve ever been on the podium there, which he’s done in addition to that victory. All that, plus a now much-reduced 22-point gap to the top of the Championship, makes ominous reading for his rivals.

So what can the Italian trio ahead of the Brit do to hit back? Marini, certainly, will be hoping to feel a few less effects from his monster highside at Le Mans which left him on the back foot for race day, and Bastianini will want cut his gap to the top even more, having had a more muted weekend in France but still having gained some ground. Bezzecchi was the only one of the Championship top three to fight it out for the rostrum at Le Mans though, and he’s on his own roll – equalling the podium count of both Marini and Bastianini in 2020 with his third place.

In fifth overall, meanwhile, lurks Jorge Martin (Red Bull KTM Ajo). It’s been a tough return since he was forced to sit out some races, but the Spaniard will be on home turf and said ahead of Le Mans that he has nothing to lose, with a 2021 MotoGP™ seat already his. Now quite a way off the top in the standings too, he’s gunning for the win every weekend so he can’t be counted out. And what about Joe Roberts (Tennor American Racing)? The American lost out on starting from the pole he’d taken on Saturday in France, but from the back of the grid Roberts was riding through the competition like they were standing still. He made it all the way back to sixth, and he’ll be gunning to prove a point at Aragon to back that up.

Remy Gardner (ONEXOX TKKR SAG Team) could be a threat again as he impressed with his speed in France and took his second podium too, and Augusto Fernandez (EG 0,0 Marc VDS) was in the battle for the rostrum until late on as well. Can he keep that improved form going? And was France a turning point for Lorenzo Baldassarri (Flexbox HP 40), another of the handful of riders who has been on the podium at MotorLand in Moto2™? And what about Dixon, who was on fire in France before his crash and is a man on form?

Jorge Navarro (HDR Heidrun Speed Up) has also taken a podium at Aragon. He’ll want to bounce back after Misano and Barcelona had been a key upturn in fortunes for Speed Up, and he’s racing on home turf to boot. Teammate Fabio Di Giannantonio took a solid seventh in Le Mans despite riding through the pain barrier too, so he’ll want to move forward again with a few more days to rest up…

Technical, unique and ready to roll for two race weekends in a row, MotorLand welcomes Moto2™ back with Lowes the man on a mission. Can the Brit win two in a row? Or will the competition hit back? Find out on Sunday the 18th of October at 12:20 (GMT +2).