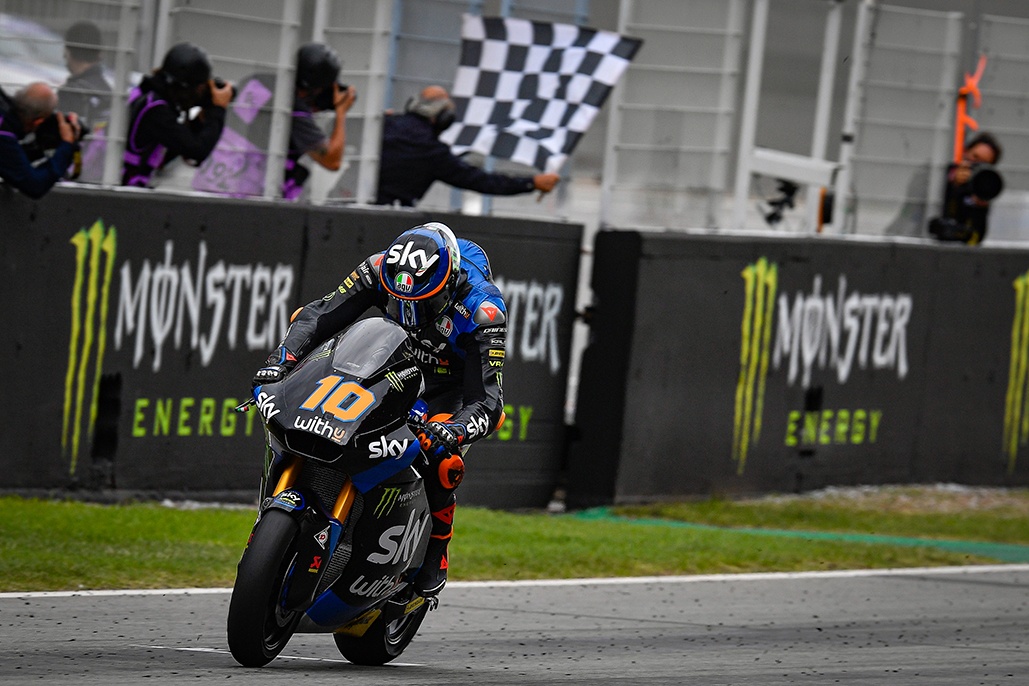 The Italian was superlative in Barcelona. Now it’s time to reset for more in France, can he keep the upper hand?

The Moto2™ momentum has swung a few different ways in 2020. From Luca Marini (Sky Racing Team VR46) to Enea Bastianini (Italtrans Racing Team) to Jorge Martin (Red Bull KTM Ajo) and then back again, we arrive at Le Mans for the Shark Helmets Grand Prix de France with one man very much in the driving seat: Marini. The Italian is 20 points clear now, and arrives fresh off the back of another superlative win last time out.

So, can he do it again? He explained in Misano that his Achilles’ heel so far in 2020 was more the second time round at the same track, as he felt he failed to make a step to stay in the same contention. If he’s confident straight out the box, Le Mans will be good news for him – with one race and one race only at the classic Sarthe venue.

It’s not been an easy journey for Marini to achieve to his 20 point advantage though. Bastianini has won three races and will want to flex his form again at Le Mans to fight back, and Marco Bezzechi (Sky Racing Team VR46) is an ever-present threat, the ‘enemy within’ Marini’s team. Last time out though, it was Sam Lowes (EG 0,0 Marc VDS) bringing the noise, and the Brit is on a charge of his own. At Le Mans, he’ll want to duel it out for the win once again – and this time hope for a little less work to do off the line.

Another rider looking to hit back is Jorge Martin. After sitting out two races, the Spaniard was back in Barcelona but forced to retire in the end, so we’ve not seen his full form on full power. He was the man with the momentum when bad luck struck ahead of Misano too – and there’s even more to write home about now. He’s been announced at Pramac Racing in MotoGP™ next year, so the audition is officially over and now the real show can begin. What can Martin do? He was ominous in Austria…

Plenty of eyes will also be on Termozeta Speed Up’s Fabio Di Giannantonio and Jorge Navarro. The former was back on the podium in Barcelona and the latter only just off it, and the two results brought a welcome end to a tough start to 2020. It’s not just one venue either, as the two have been clawing their way back to the front. What can they do in France?

Joe Roberts (Tennor American Racing) was the man who just lost out – after an almighty battle – on that fourth place taken by Navarro, and he’ll want to be back up fighting for the podium again in Le Mans. Add in the likes of rookie Aron Canet (Inde Aspar Team), Liqui Moly Intact GP’s Marcel Schrötter and Tom Lüthi and Qatar winner Tetsuta Nagashima (Red Bull KTM Ajo) and it’s sure to be another stellar showdown in the top ten. And what can Remy Gardner (ONEXOX TKKR SAG Team) do as he has more time to get back to better fitness? Can Marcos Ramirez (Tennor American Racing) keep his top ten form? And what about Xavi Vierge and Jake Dixon (Petronas Sprinta Racing), whose impressive performances in Barcelona were cut short by a crash and a bike problem, respectively?

Marini has the momentum as we arrive at Le Mans, but the cast of characters looking to steal it is chock full of seriously fast riders. Who can come out on top in France? Find out at the later time of 14:30 (GMT +2) on Sunday!