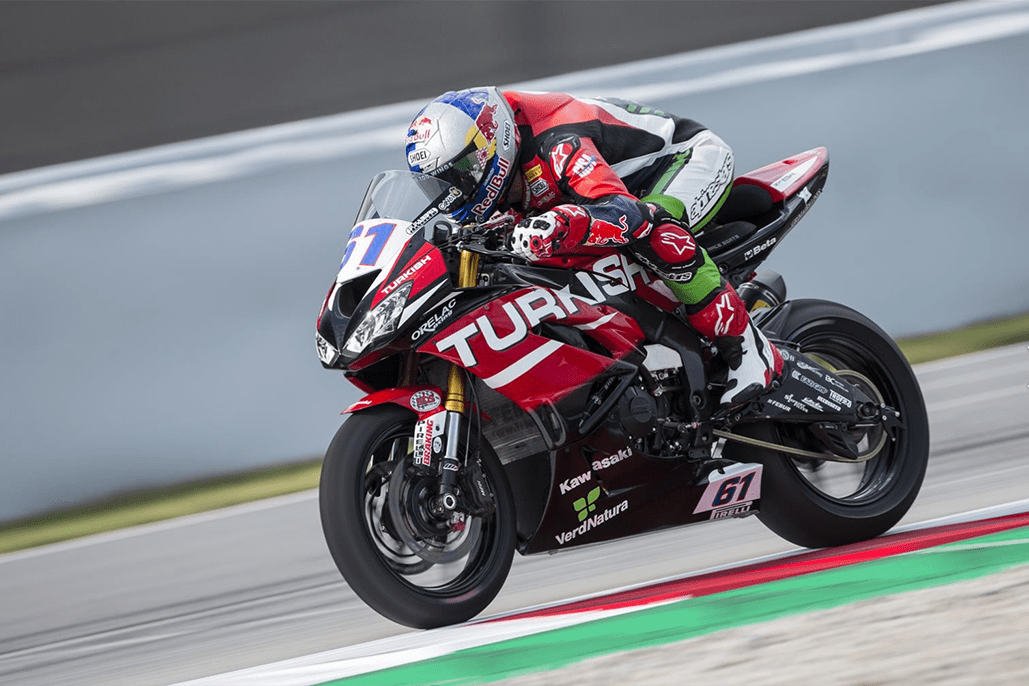 Kawasaki Puccetti Racing will once again field the pairing of Lucas Mahias and Philipp Öttl at the culmination of the 2020 FIM Supersport World Championship, to be held at Estoril this coming weekend. There will be a significant change in the team’s WorldSSP rider line up for 2021.

Having guaranteed himself second place in the championship fight Lucas will be out to try and replicate his win at the most recent round in his native France before he moves on to be the focus of Kawasaki Puccetti Racing team’s WorldSBK ambitions in 2021. Having performed so well in the WorldSSP category the team is confident that the ever-combative and motivated Mahias is the ideal choice to continue their combined drive for podium positions on the Ninja ZX-10RR.

For Öttl there is the possibility to finish overall third in his rookie WorldSSP championship if he can score strongly in both Estoril races. Having ridden there twice in his earlier career he may well have an advantage over some of his rivals, as WorldSSP has never been run at the Portuguese venue before.

With three podium finishes to his name in this class already, after spending most of his career in the MotoGP paddock, the 24-year-old Öttl is ready to fight for more top three finishes in what has been a short season, featuring double-header races ever since the restart of the season in early August.

With the 2020 racing action about to draw to a close the Kawasaki Puccetti Racing squad has confirmed that with Mahias taking over the WorldSBK ride next year, Öttl will remain in the WorldSSP squad and be joined by another 2020 rookie in this class, Can ÖncüCan Öncü (Turkish Puccetti Racing).

Having competed in a podium position for much of one of the wet races at Magny Cours, before being finally caught out by the conditions, Öncü is a former Rookies Cup champion and Moto3 race winner, and is still only 17 years of age.

Lucas Mahias, stated: “This weekend will be the first time I have ridden at Estoril but I have watched a lot of video coverage and I think it will be a good track for Kawasaki and me during my last race weekend in the WorldSSP class. I think it will be a special weekend. I will go out to enjoy it – and try to win. I won one race at Magny Cours, my home track that I know very well, in a lot of rain. The forecast at Estoril is that it could rain again, but the track and the surface will be new to me. After the first round of the year in Australia I was a little bit scared we would not get to ride again this year, to so to finish the season has been a good thing for all of us. I want to thank Dorna and the FIM for organising the races in these conditions as it was not easy. I also liked the format of the two races per weekend and the intensity of the season – one round then one weekend off, another round then one weekend off.”

Philipp Öttl, stated: “Of course I am very happy to continue with Manuel and the Kawasaki Puccetti Racing team. They are very professional and Kawasaki is backing our project. We are all looking forward to next year and I am hoping that we can have even better results. That is our target; to be in the front of the WorldSSP Championship in 2021. For sure it won’t be easy but I think we have a competitive package. Now I am focusing on the last race of this season in Estoril. I know the track from riding in the Rookies Cup eight years ago. I rode there for two years so I have some experience of this track. I hope I can use this to my advantage as we still want to finish P3 in the overall championship. My goal is to focus on myself, make the best results we can do and we will see where we end up. I am looking forward to the last race and then the winter preparation for the new season after that.”

Can Öncü, stated: “I’m really happy to join the Puccetti family in World Supersport. I can’t wait to test my new bike and start working with my new team, and I’ll be aiming for the best possible results, hopefully putting the experience I’ve gained this year to good use. I want to thank Kenan Sofuoglu, Manuel Puccetti and the Turkish Motorcycle Federation for allowing me to achieve what is a real dream for me.”

Manuel Gonzalez (Kawasaki ParkinGO Team) can harbour ambitions to finish inside the overall top five after some strong rides in his rookie season. He currently sits seventh overall, with a best race finish of sixth.