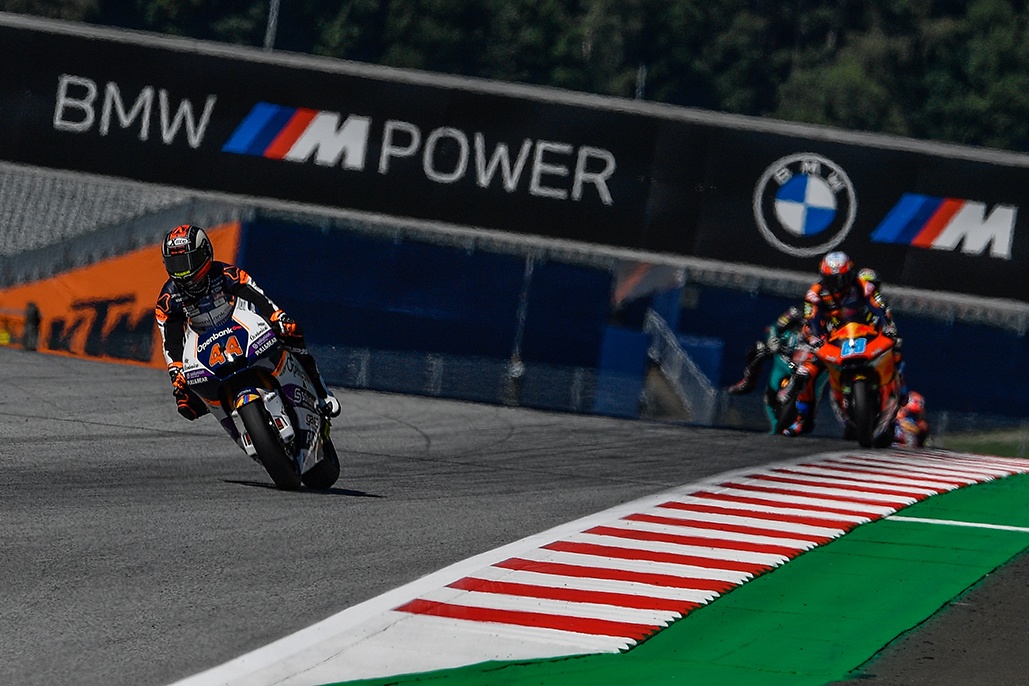 The rookie continues his impressive adaptation to the intermediate class, this time with pole as he denies Austrian GP winner Martin.

Rookie sensation Aron Canet (Openbank Aspar Team) has claimed his maiden Moto2™ pole position thanks to a 1:28.787 in Q2 at the BMW M Grand Prix of Styria, with the Spaniard heading Austrian GP winner and compatriot Jorge Martin (Red Bull KTM Ajo) by 0.118. Previous Red Bull Ring polesitter Tetsuta Nagashima makes it two Red Bull KTM Ajo machines on the front row as he bounced back from some tougher weekends.

In Q1 it was Somkiat Chantra (Idemitsu Honda Team Asia) heading through ahead of Nagashima, with the two joined by Hector Garzo (Flexbox HP 40) and Stefano Manzi (MV Agusta Forward Racing) moving through to Q2. Once the lights went out for that session, it was Free Practice pacesetter Martin fastest out the traps.

The KTM star was leading Garzo and Sam Lowes (EG 0,0 Marc VDS) in the opening exchanges, before Q1 graduate Nagashima then went P1. However, Canet was on a charge. The number 44 slammed in a 1:28.787 to lay down the gauntlet to his rivals, with Martin trying to respond shortly after but two tenths adrift as Remy Gardner (Onexox TKKR SAG Team) then went P4.

The Australian then crashed unhurt at Turn 1, and Jake Dixon (Petronas Sprinta Racing) took a small tumble at Turn 3 as the duo were both inside the top 10. In tandem, Sky Racing Team VR46’s Marco Bezzecchi took over in P4 as he followed teammate Luca Marini, and the Italians then swapped track position as Marini got himself up to P9, the Championship leader struggling to make real inroads into the top six….

Tom Lüthi (Liqui Moly Intact GP) looked back to his best as the experienced Swiss rider climbed to P7 in Q2, but no one was able to really look like they were going to challenge Canet’s benchmark. That was until Augusto Fernandez (EG 0,0 Marc VDS) and Nagashima were just a tenth down halfway round the lap with little time remaining… but at the line, neither improved and it was left to a hard-charging Martin to try and topple Canet. The Red Bull KTM Ajo rider was 0.034 under Canet’s time as he roared past the Sector 3 marker and into Turn 9, but the former Moto3™ World Champion was unable to keep his soaring lap going, crossing the line a tenth down on Canet’s. Result? A rookie pole.

Martin won’t be too disheartened with second on the grid, he’s been there before and it turned out ok last week… for his first Moto2™ victory. Nagashima salvaged a front row start after finishing second in Q1, and that’s by far his best qualifying of the season – his previous best being P8 at the Spanish GP. Can the Japanese rider get his Championship charge back on track at the Red Bull Ring?

Fernandez’ P4 in qualifying is his best Saturday result of the season too as a pre-season favourite finds form. Bezzecchi launches from the middle of the second row aiming for his second podium of the season, with Gardner’s crash – luckily – not affecting him too badly. It’s P6 for the Australian, who keeps Lüthi off the second row by 0.051. Both the latter and Garzo set the exact same lap time in Q2 to line-up P7 and P8, with Jorge Navarro (+Ego Speed Up) and Federal Oil Gresini Moto2’s Nicolo Bulega completing the top 10.

Down in 11th, meanwhile, it’s Lowes’ worst qualifying result of 2020. The Briton crashed heavily in FP3 and will be feeling the effects of his shoulder injury earlier in the year, while Championship leader Marini had to settle for 12th in Styrian GP qualifying. Dixon and Joe Roberts (Tennor American Racing) sit between the Italian and title rival Enea Bastianini (Italtrans Racing Team) as 2020’s leading contenders aim to claw their way through the field on Sunday afternoon…

Plenty has shuffled since last week, and Sunday promises another stunning twist in the title fight. Tune in for the Moto2™ race at 12:20 (GMT+2)!

Aron Canet: “I’m very happy to be here on pole in Moto2, it’s a really difficult category for me, all the riders and the rookies. After MotoGP the grip changes a lot, for me it didn’t change so much but for others they can’t do the time… for that, I was able to take pole. We’ll see what happens tomorrow because for sure we’ll see different conditions, but with dry conditions I’m very happy with my pace!”