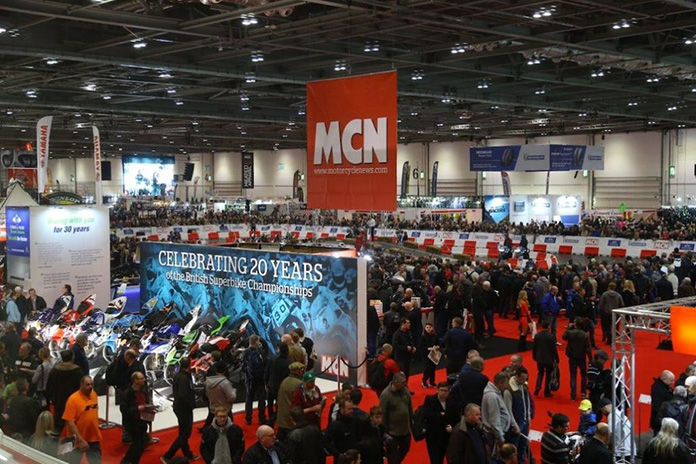 With just days to go until the 2017 Carole Nash MCN London Motorcycle Show roars into the London ExCeL centre, 22 of the world’s leading manufacturers are set to showcase the latest in new metal. Displaying the best of Britain, Triumph will be debuting their new Street Triple whilst Norton bring their jaw-dropping V4RR and V4SS Superbikes. Live action, racing stars and a wide range of exciting activities ensures the three day event provides something for the whole family.

The annual motorcycling extravaganza at the ExCeL Centre in London’s Docklands is the only opportunity for the Capital to see the very best in two wheel life under one roof. Leading the way is 22 of the world’s best manufacturers who will be showcasing their 2017 ranges of machines, such as Ducati’s 215bhp Superleggera, Honda’s latest Fireblade, the all-new Yamaha YZF-R6 and the UK debut of Triumph’s recently unveiled 765cc Street Triple. Norton will also be displaying the British designed and built Superbikes – the V4RR and V4SS. The full list of manufacturers includes; Aprilia, BMW, Brough Superior, CCM, Ducati, Energica, Harley-Davidson, Herald, Hesketh, Honda, Indian, Kawasaki, KTM, Llexeter, Moto Guzzi, Norton, Piaggio, Royal Enfield, Suzuki, Triumph, Vespa and Yamaha.

Race fans will find plenty of exclusive content this year, as the show exhibits a rare collection of iconic Barry Sheene machines, including his 1976 and 1977 title winning Suzuki’s, as well as playing host to a number of MCE British Superbike Championship riders and team unveilings. MotoGP fans are in for a further treat as three genuine Ducati Desmosedici’s used by Loris Capirossi, Carlos Checa and Casey Stoner will be on display throughout the event, and in an explosion of noise, will also be fired-up on the Saturday!

Elsewhere, historic vehicle specialist, Coys, will be putting a collection of the rarest motorcycles and memorabilia under the hammer throughout the weekend whilst the David Silver Museum are bringing a number of rare Honda machines to display.

Also returning for 2017 is the popular London Custom Bike Championship, with builders from across Europe coming together to compete for the prize purse. The Harley-Davidson ‘Battle of the Kings III’ are also heading to the London show, as judges choose their UK winner, who will go on to compete in the grand final in November.

Fans will be able to rub shoulders with motorcycling stars throughout the event too, with World Superbike legend Carl Fogarty and Charley Boorman already confirmed to be in attendance.

Rob Aherne Managing Director of Motorcycling at Bauer Media said, “The 2017 Carole Nash MCN London Motorcycle Show is set to be the biggest we’ve ever had. With the show expanding in size for this year we’re able to welcome an unprecedented 22 manufacturers, whilst our four zones; Sports and Performance, Classic, Custom and Adventure ensure there’s something for every kind of biker.

On top of that we’re once again welcoming a host of racing stars and memorabilia, from the Barry Sheene exhibit and MotoGP Ducati’s through to British Superbike unveilings we’ve got it covered!”

Rebecca Donohue, Head of Marketing at Carole Nash added, “It’s fantastic to have 22 manufacturers bringing their very latest machines to the 2017 Carole Nash MCN London Motorcycle Show. All of these machines, combined with motorcycling displays in the Sports and Performance, Custom, Adventure and Classic zones means the event truly covers every aspect of motorcycling and we can’t wait to attend!

There will be plenty of exciting things taking place at the Carole Nash stand, including two bikes from Bonhams Auction House and a custom Harley-Davidson, as well as a free biking gift with every quote and a chance to grab one of our exclusive 2017 calendars which is raising money for the Nationwide Association of Bloodbikes. What’s more, we’re giving back to the Carole Nash Community with free tea and coffee for all policyholders attending the event! So don’t forget to visit us at Stand M110.”

Tickets for the 2017 Carole Nash MCN London Motorcycle Show are on sale now, with fans able to purchase discounted standard adult tickets online from £17 (available until 14th Feb). Kids under 15 go free. New for the 2017 is the Paddock Pass, giving ticket holders exclusive access to the Michelin sponsored Slide Live Action Arena, a private bar area and tiered seating. A paddock pass is your best opportunity to try and get your favourite rider’s autograph and enjoy Slide whilst having the best view in the house. Paddock Passes cost £40 and includes general show admission.

To find out more about the 2017 Carole Nash MCN London Motorcycle Show and book tickets, visit www.mcnmotorcycleshow.com or call 0844 873 7346