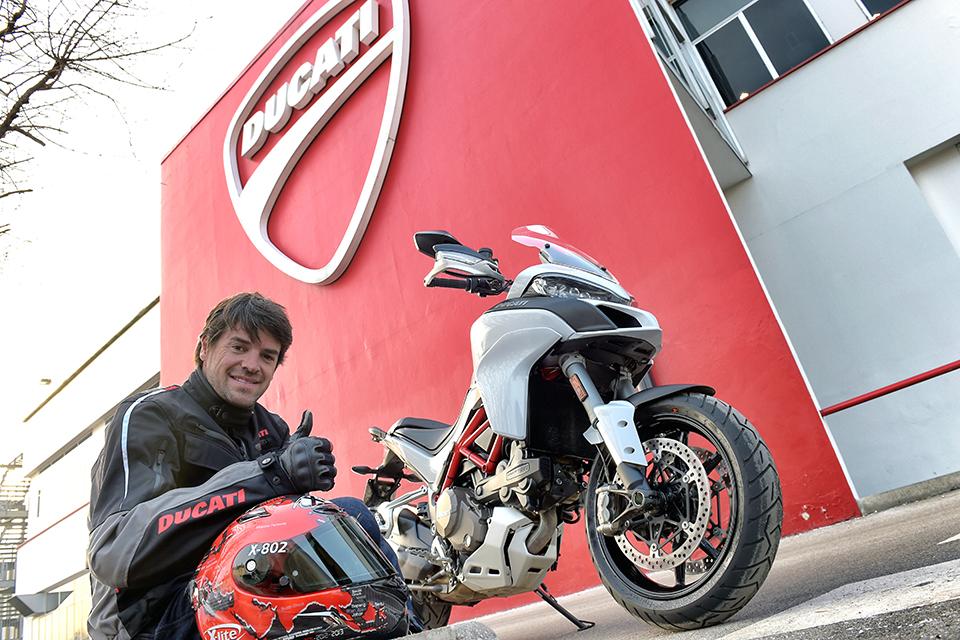 The new Multistrada 1200, presented last November at the World Ducati Premiere 2014, has won over not only the public of EICMA in Milan, but also a celebrated Ducatista: Carlos Checa. The Spaniard, who was World Champion in 2011 among the modified production bikes, riding a Ducati, expressed the desire to ride the new Italian multibike. The opportunity arose when production of the bike began, and Carlos took possession of the first model to come off the production line at the Borgo Panigale factory.

“I already had the first version of the Multistrada 1200 and I saw right away that this was my ideal bike. When I saw the new model at EICMA I literally fell in love with it,” said Carlos Checa during his visit to Borgo Panigale. “I realised immediately that the bike had been completely changed and had taken an important step forward in terms of technology, safety and performance. I asked if I could ride it and the moment has come at last. I’ve already ridden a few kilometres and that’s all I needed to notice that the new Testastretta DVT engine is a good step ahead in terms of functioning regularity and performance. The new electronic system, commanded by the inertial platform, has made it possible to introduce a lot of new elements such as ABS Cornering. I also really love the new instrumentation which provides multiple possibilities for connectivity, as well as the new handlebar controls which are more ergonomic and easier to use. For certain I’ll be riding a long way with my new Ducati Multistrada 1200”.

Carlos Checa and the new Multistrada 1200 were in Courmayeur last weekend, guests at the second appointment with the Winter Tour (the third stop will take place in Ischgl, Austria, 21-22 February, for info wintertour.ducati.com) and they’ll soon be taking part in other adventures to come.

The new Ducati Multistrada 1200 will be available in UK Ducati dealerships from the end of March.

As soon as it was launched back in 2010, the Multistrada 1200 revolutionised the motorcycling world by offering, for the very first time, nothing less than four bikes in one: from super sport to long-distance tourer, from everyday runabout to enduro. Now, Ducati’s technological expertise has produced a new generation of Multistradas, bikes featuring the latest Ducati Testastretta DVT (Desmodromic Variable Timing) engine and a state-of-the-art technological package that sets a whole new standard in its product segment. The new Multistrada 1200 is the “multibike” par excellence, with cutting-edge technology making it far more than just the 4-bikes-in-1 offered by its Riding Modes.

In what is a first for the motorcycle industry, the DVT engine features a variable valve timing system with independent control of both the intake and exhaust camshafts. This optimises engine performance throughout the power range in all riding conditions, thus ensuring maximum power at high rpm, fluid delivery, punchy low-rpm torque and low fuel consumption in full compliance with the latest Euro 4 regulations.

The new Multistrada 1200 also sets a new electronics benchmark thanks to the Inertial Measurement Unit (IMU), developed by Bosch technicians, which dynamically measures roll and pitch angles as well as the acceleration on three axis; with this information, the Bosch IMU enhances both performance and safety. For example, the presence of the IMU enables the ABS to include a Cornering system capable of controlling braking even on bends where wheel lock could otherwise cause skidding. On the Multistrada 1200 S it also enables control the Ducati Cornering Lights (DCL) in its full LED headlamp. Moreover, the Bosch IMU has allowed the introduction of Ducati Wheelie Control (DWC): this detects and corrects any front wheel lift to ensure maximum acceleration in complete safety. Like Ducati Traction Control (DTC), DWC features rider-settable 8-level sensitivity. Lastly, the Bosch IMU inertial platform also interacts with the semi-active Ducati Skyhook Suspension (DSS) Evolution (DSS) control system featured on the Multistrada 1200 S.