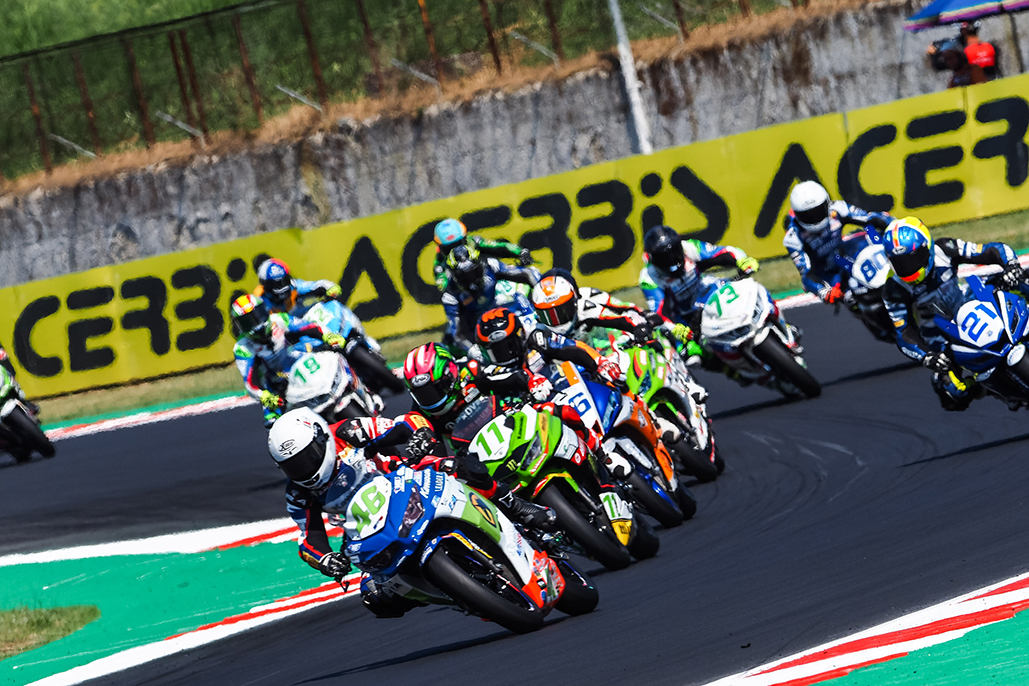 Racing at the Misano World Circuit “Marco Simoncelli” came to a conclusion with a thrilling FIM Supersport 300 World Championship Race 2 which was won by 2018 World Champion Ana Carrasco (Kawasaki Provec WorldSSP300) claiming her first victory in her comeback from injury at the Pirelli Made in Italy Emilia-Romagna Round.

Carrasco claimed the victory after Tom Booth-Amos (Fusport – RT Motorsports by SKM – Kawasaki) made an error at the final corner and crashed out although he was able to re-mount his bike to come home in 17th place. Meikon Kawakami (AD78 Team Brasil by MS Racing) claimed his first ever WorldSSP300 podium with second place ahead of Samuel di Sora (Leader Team Flembbo) in third, his first podium in the class.

Polesitter Bahattin Sofuoglu (Biblion Yamaha Motoxracing) lost out at the start but was able to recover to stay in the lead group throughout the 15-lap race although did not return to the rostrum, coming home in sixth place, with Gabriele Mastroluca (ProGP Racing) in fourth place; the Italian had crossed the line in third but was given a penalty to drop one position follow a last-lap track limits infringement.

Ton Kawakami (AD78 Team Brasil by MS Racing) was running in second race in the early stages when he had a huge moment coming out of the final corner as the Brazilian rider came off his Yamaha machine and across the track, although thankfully the other riders were all able to avoid Kawakami; the Brazilian retiring from the race.

Gaps started to form at the front of the field with Tom Booth-Amos (Fusport – RT Motorsports by SKM – Kawasaki), Hugo De Cancellis (Prodina Team Flembbo), Sofuoglu, Adrian Huertas (MTM Kawasaki) all fighting for victory in the opening half of the race; De Cancellis and Booth-Amos swapping positions regularly with Sofuoglu always near the podium places. Steeman was able to stay with the lead group despite an impressive save from his KTM machine on the exit of Turn 8; Steeman eventually finishing in ninth after a three-second penalty.

Dorren Loureiro (Fusport – RT Motorsport by SKM – Kawasaki) claimed his best finish in WorldSSP300 since 2018 with fifth place, finishing ahead of Sofuoglu in the lead group of six. Reigning Champion Jeffrey Buis (MTM Kawasaki) came home in seventh Oliver König (Movisio by MIE) in eighth. Steeman was ninth with Adrian Huertas (MTM Kawasaki), who had taken the Championship lead on Saturday, finished in tenth.

Bruno Ieraci (Machado CAME SBK) retired from the race after a highside crash at Turn 14, while Marc Garcia (2R Racing) had a technical issue that forced him out of the race. Just after setting the fastest lap of the race, Unai Orradre (Yamaha MS Racing) crashed from a top ten position but was able to re-join, finishing outside the points, while Marco Gaggi (Biblion Yamaha Motoxracing) had a technical issue as well as Vicente Perez Selfa (Machado CAME SBK). Inigo Iglesias (SWM Racing) retired from the race on Lap 9.

Mirko Gennai (Team BRcorse) retired after he crashed at Turn 2 at the start of Lap 13. Hugo de Cancellis (Prodina Team WorldSSP300) had been in the lead group but a crash involving Yuta Okaya (MTM Kawasaki) forced both to retire, with Okaya taken to the medical centre for a check up following the incident. Victor Rodriguez Nuñez (Accolade Smrz Racing) also retired from the race on the final lap.

P1 Ana Carrasco (Kawasaki Provec WorldSSP300)
“Thank you very much. I honestly didn’t expect the victory today because yesterday was a hard race, also the beginning was not going the way I wanted… But yeah, I cannot be more happy than now. We are finally here, after the injury. And I want to say thanks to my team, to all my family because they helped me a lot to be here today”

P2 Meikon Kawakami (AD78 Team Brasil by MS Racing)
“Well, I had tough seasons in the past. And in the beginning of this season, we always suffered in this straight in this bike with my stature but we said: “Okay, we don’t give up.” In life you always need to be strong, and we made it. So yeah, very happy. Thanks to all the people helping me and supporting me always, only this. ”

P3 Samuel De Sora (Leader Team Flembbo)
“Yeah we started one day late so I would like to start qualifying now in some way. The team did a great job to go through all the problems of this weekend. It was very very very tough. We had a very battled race as always in WorldSSP300. I was third in the last sector, I almost crashed, saved it. Managed to get the bike to the finish line. So very happy. I want thank all my team, all my people, everyone who believed in me and see you in the next one!”