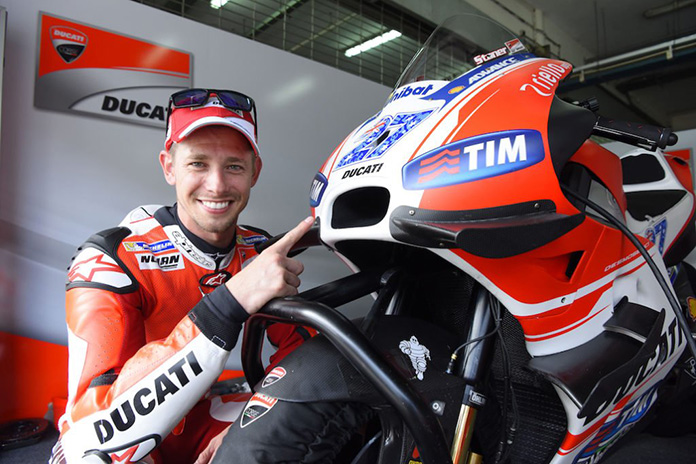 “I don’t want to miss WDW2016 and I’m gonna do everything possible to be at Misano from 1 to 3 July!”, said Casey Stoner during a visit to Ducati back in December 2015. Now, we can say for sure that the Australian rider, who won the 2007 MotoGP World Championship on the Ducati Desmosedici, is going to be there. One more reason, then, not to miss this edition and the exciting celebrations surrounding Ducati’s 90th anniversary which will be reaching their peak during the World Ducati Week.

The idol of the Ducatista community and currently an official MotoGP test rider, Casey will be joining a host of other riders and celebrities; they’ll be at Misano, in the paddock and taking part in the countless events planned for this incredible long-weekend that, every two years, brings together Ducatisti from all over the world. The final 2016 guest list will be drawn up over the coming days, but everything looks set for an exceptional star-studded event.

The Ducati organisational machine is now working flat out to ensure the thousands of visitors arriving at the “Marco Simoncelli” Misano World Circuit from 1 to 3 July get a warm welcome (the last edition drew a massive 65,000 participants). Pre-sales and ticket bookings continue to confirm the growing excitement for this 9th edition of WDW and Ducatisti and motorcycle enthusiasts can look forward to an awesome array of events and initiatives. These will include an area dedicated entirely to the cruiser world and the new XDiavel. The motorcycling revelation of 2016 in terms of style, performance and technology – and voted Most Beautiful Bike of Show at EICMA2015 – the XDiavel is already a design icon as confirmed by the international “Red Dot Award 2016: Best of the Best” and will play a pivotal role in the paddock at WDW2016. The unique world that goes together with this bike will have its own area where visitors can experience “XDiavel lifestyle”; this action-packed part of the paddock will also give WDW participants a great opportunity to take the motorcycle for a test ride on the roads around the “Marco Simoncelli” Misano World Circuit.

Following the success of past editions, WDW2016 will see the return of the Ducati University, offering in-depth tuition on the technology of Ducati bikes and the motorcycling world in general. Ducati and Ducati Corse technical staff will hold a series of seminars, investigating key themes such as: “Engineering” (technological innovation and the skills that breathe life into new models), “Design” (to understand more about the decisions behind unique Ducati styling), “Riding” (to improve track riding skills), “Service” (to ensure you know everything needed to maintain your Ducati and keep it running efficiently), “Safety” (the technology behind Ducati product safety plus some First Aid theory and practice) and, of course, the “Ducati Corse” seminar (to get a first-hand account of this season’s plans). To celebrate the company’s 90th anniversary, the Ducati University will also hold a series of talks on the history of the “Bologna-built bikes”, taking a close look at the iconic racing and road machines that have had such a huge impact on motorcycling since the end of the war.

To demonstrate our commitment to sustainability, Ducati has – for this 9th edition of WDW – applied for ISO 20121 certification: this international management standard regarding the sustainable organisation of events was first officially instituted in 2012 for the London Olympic Games. The goal is to demonstrate how an event like WDW2016, which attracts thousands of enthusiasts from all over the globe, can also be organised in a way that is balanced from an economic, environmental and social viewpoint.

With two months to go to the opening of World Ducati Week 2016, sales of passes and tickets are sky-rocketing and purchases are being made from all over the world. The dedicated website (wdw.ducati.com) is up and running and has all the info you need to get to Misano on 1st-2nd-3rd July and ensure you don’t miss a second of this awesome Ducati gathering.

The major novelty for 2016 is the “VIP Dealer Package”, that is the purchase of a special WDW2016 pass – already available from Ducati dealers – that offers special ticket prices and an exclusive opportunity to meet Ducati riders.