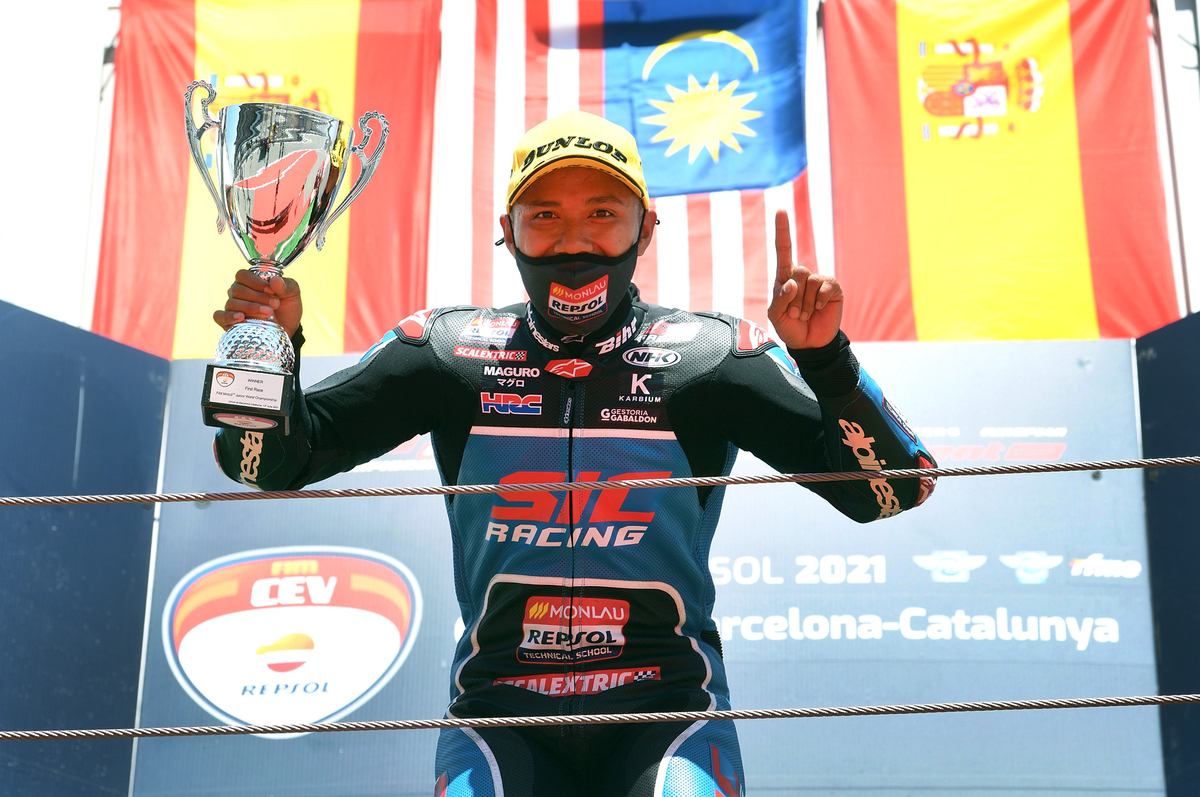 All done in Barcelona as a day of 5 races comes to an end under the baking sun. New winners and continued dominance, here is what happened on Sunday.

Circuit de Barcelona – Catalunya played to host a fantastic display right throughout the weekend. With scorching temperatures met by scorching lap times, the action was plenty as 5 races led to 4 different race winners. In the FIM Moto3™ Junior World Championship, Syarifuddin Azman (SIC Racing) and Daniel Holgado (Aspar Junior Team) shared the wins. Fermin Aldeguer (Boscoscuro Talent Team-Ciatti) was once again the dominant force in the Moto2™ European Championship as he raced into the distance winning both races and it was 15-year-old Xabi Zurutuza (Cuna de Campeones) that took the win in Hawkers European Talent Cup.

In race 1 of the FIM Moto3™ JWCh Daniel Holgado was denied victory for the first time in 2021 as he ended up finishing fourth. The win went the way of Syarifuddin Azman, who went from 5th to 1st at Turn 10 on the final lap to take his first-ever victory in the class. An incredible ride saw David Munoz (Avatel-Cardoso Racing) go from 19th to 2nd for his first podium in the class and completing the top three was Jose Antonio Rueda (Team Estrella Galicia 0,0) just 0.272s behind at the flag.

Race 2 was an entirely different story as a return to normality arrived for Holgado, and by normality, we mean a return to winning ways. Victory number four of the season greeted the Spaniard as he held off a leading pack of nine on the final lap. Ivan Ortola (Team MTA) rode to a superb 2nd place to take his best finish in the class. Completing the podium was the young Brit Scott Ogden (Aspar Junior Team) to make it an Aspar 1-3 and even 4 when you include David Alonso (Aspar Junior Team) in 4th place. For Ogden though, it was a maiden podium and it capped off a strong day after 5th in the first race. At the end of the FIM Moto3™ JWCh running in Barcelona, Holgado stretches his Championship lead out to a staggering 53 points.

In Moto2™ ECh it was business as usual for Aldeguer at the flag, but he did have some work to do! The 16-year-old was squeezed out at Turn 1 as Lukas Tulovic (Liqui Moly Intact SIC Racing Team) and Alonso Lopez (Boscosuro Talent Team-Ciatti) grabbed 1st and 2nd on the first lap. Aldeguer quickly set to work and picked them off to take the lead and from there, streaked away to a 7-second winning margin. Behind, Lopez got the better of a strong Tulovic as the pair rounded out the podium.

Race 2 was dominated from lights to flag by Aldeguer as he grabbed the holeshot and never looked back. He was held honest by Lopez for 7 laps before Lopez then slipped back, relinquishing to Aldeguer’s superior pace. Tulovic would once again take 3rd place but this time didn’t quite have to pace to run with Lopez. But Tulovic can be happy with a double podium performance as he’s now in control of 3rd place in the Championship.

As always, HETC provided action right from the off as the racers of the future got to grips with hot and greasy conditions in Catalunya. With just one race on the agenda for the youngsters, they were giving it everything from the start and a group of 4 broke away in the early laps. The Cuna de Campeones trio of Zurutuza, Hugo Millan and Adrian Cruces were joined by the fast-starting Maximo Martinez (Team Honda Laglisse) as they pulled well clear of the pack by 12 seconds in the end. But, there was drama, as the then Championship Leader Cruces tumbled at Turn 7, leaving his teammates and Martinez to battle it out. A last lap thriller unfolded, with Zurutuza coming out on top by just 0.024s from Martinez and Millan a further 0.022s back in 3rd. After 5 races, Millan leads the Championship by just 7 points.