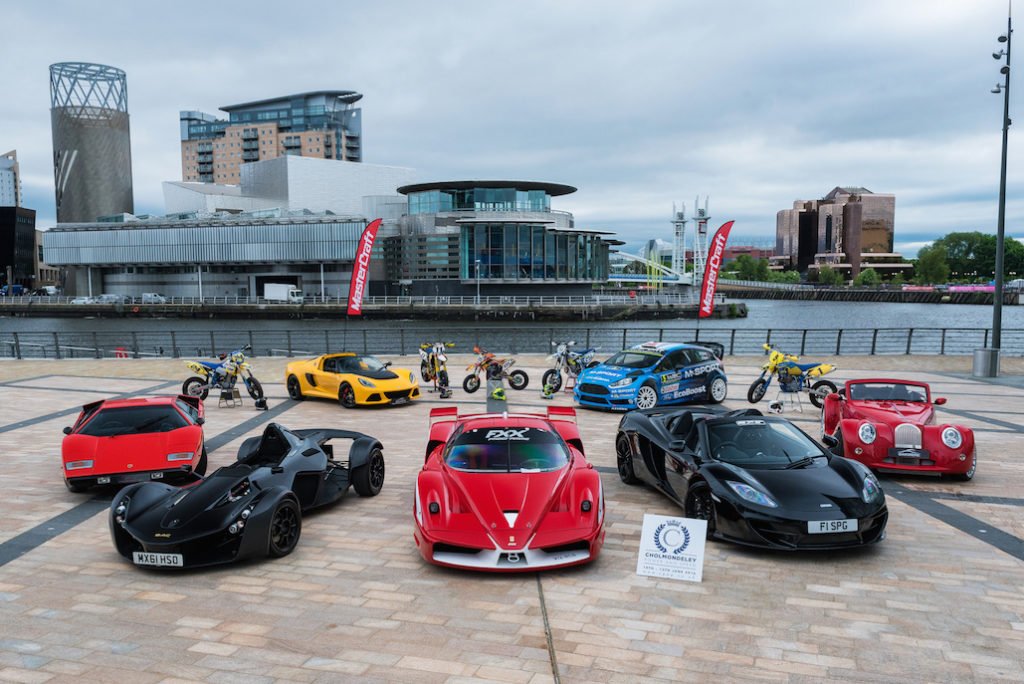 An exciting range of cars and bikes, representing just a small amount of the action set for the event, assembled on the Piazza. These included:

Speaking about this year’s event, LMP1 and BAC Mono test driver, Oliver Webb, said: “This year I’ll be taking to the Cholmondeley Power and Speed track in a BAC Mono and I’m looking forward to trying to regain our title for fastest lap. The event is great for the whole family as you get to see horsepower on two and four wheels as well as on water, all in one place.”

In addition to the four-wheeled action, there will be plenty of two-wheeled excitement out on track, including a demonstration from Supermoto UK. One rider set to take part is Tyco BMW rider, Chrisitian Iddon: “I like the fact that there’s loads to see and do. It’s a really relaxed and enjoyable weekend out and I get to see machinery like super cars, vintage cars and boats that I wouldn’t normally get to see on a race weekend.”

The multiple Supermoto champion and current British Superbike Championship competitor will be joined on track by 10-year-old Casey Jones, who has already won numerous Motocross trophies and is now training in Supermoto. Casey added: “I’m looking forward to being a mascot with Dave Clarke racing and riding on track with the adult Supermoto riders. I love the speed and power of riding and can’t wait to show off our skills on track.”

Also at the preview event was Drive Dmack Fiesta Trophy Driver, Gus Greensmith, who said: “Cholmondeley Power and Speed brings together a wide range of cars, motorbikes, air displays and boats. For variety and full-on entertainment it’s one of the best motorsport events to attend.”

With the water action always a key part of the family-friendly event, the third round of the 2016 Pro Wakeboard Tour is sure to be a popular addition to the weekend schedule.

Speaking from the event, where a range of tricks were performed behind a Mastercraft boat, Pro wakeboarder Ryan Peacock explained: “I’m really excited for the next Pro Wakeboard Tour event at Cholmondeley, with some of the top riders, both in the UK and internationally, set to be there. Aside from the water activity, it’s also going to be great to see all the different cars and bikes at the event.”

James Hall, event director, said: “The beautiful selection of cars and bikes, combined with the thrilling wakeboarding display, proved popular with passers-by of all ages at the preview and was a great teaser of what’s to come at the event later this month.”

Cholmondeley Power and Speed is this year celebrating Supercars: Past, Present and Future which will include stunning displays and thrilling on-track action. The activity will give attendees the chance to get up close and personal to some of the most powerful, eye-catching and revered supercars in the world.

The 2016 staging of the event will also feature the inaugural Motorshow Live! Taking place on the Friday, this all-new element of Cholmondeley Power and Speed will give car manufacturers the opportunity to demonstrate their latest models on track while enabling guests to test drive in a unique racing environment. Already committed are Lexus, Blue Bell BMW, Holdcroft Nissan and Holdcroft Honda, with Oakmere Motor Group also set to showcase their latest models from Lotus, Morgan and Caterham.

On Friday and Saturday evenings, Cholmondeley will be hosting a beer and food festival for the first time, with stand-up comedy set to entertain attendees on Saturday night. Entry to the evening activity is included with day tickets, however visitors who wish to attend just for the food, beer and comedy festival can purchase tickets for £15 for adults and £10 for children, allowing access to the site from 6pm on Saturday 11th June.

Used for student RAF pilots to make the transition from piston to jet-engined aircraft, the BAC Strikemaster will be taking to the skies above the family-friendly event. Air entertainment will continue with the Muscle Biplane G-ewiz, which can hover like a Harrier, perform double-hammerheads, complete torque rolls and even fly backwards.

All elements of the event will once again set against the stunning backdrop of Cholmondeley Castle and its beautiful parkland.

For further information and to purchase tickets, visit www.cpop.co.uk for the event at Cholmondeley Castle, Malpas, Cheshire. Adult tickets are priced from £25 with children’s tickets priced from £5