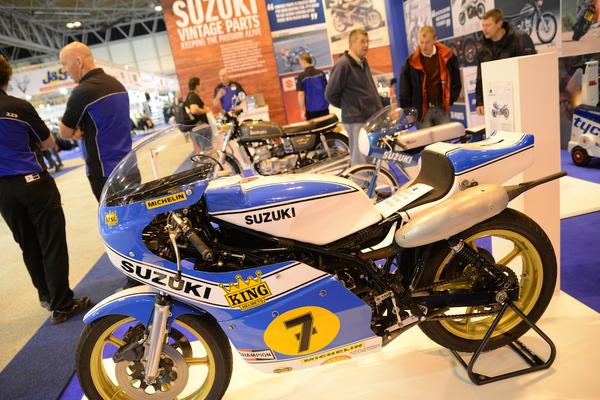 Suzuki GB and the famous Super Sausage Cafe in Northamptonshire will join forces for the second time this year to host a very special Classic Suzuki Sunday on September 7.

Welcoming iconic machines from Suzuki’s rich racing past, the Super Sausage Cafe, situated on the A5 in Potterspury near Towcester, will showcase no-less than five legendary race machines, including Barry Sheene’s 1975 XR14 RG500 and Kevin Schwantz’s championship winning RGV500 from 1993.

As well as welcoming some of Suzuki’s most famous grand prix bikes, the Super Sausage is delighted to welcome three-times British Superbike Champion John Reynolds to the day, as the 2004 champ is reunited with the Rizla Suzuki GSX-R1000 that took him to his last title.

Chris Murray of the Super Sausage Cafe commented, “Naturally we’re delighted to partner Suzuki once again at the cafe. While we’re a cafe for all bikers, we have a really strong classic scene here with several clubs using us as their base. WIth Suzuki bringing the classic racers along, we welcome our customers to turn up on their own classic Suzuki machines and hope to offer some rewards on the day too.”

The Classic Suzuki Sunday event runs in conjunction with Suzuki’s Vintage Parts Programme, keeping many popular older models on the road today thanks to Suzuki’s commitment to continue sourcing and supplying genuine parts at real-world prices.

Suzuki and the team at the Super Sausage Cafe welcome all enthusiasts to join them between 9am and 3pm on September 7.

The Super Sausage can be found on the A5 Waltling Street, near Potterspury Towcester (NN12 7QD).