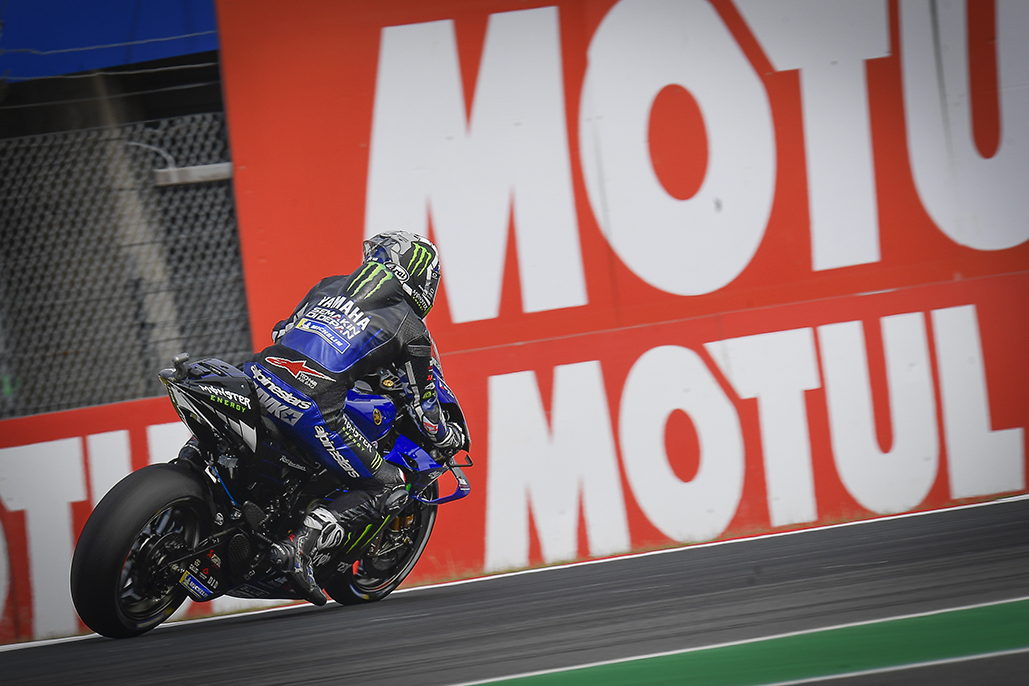 Maverick Viñales (Monster Energy Yamaha MotoGP) is back on top, the Spaniard making an early statement at the Motul TT Assen to go fastest in FP1 and FP2 as Top Gun shot first on Friday. Pol Espargaro (Repsol Honda Team) was second quickest, 0.111 in arrears, with Miguel Oliveira (Red Bull KTM Factory Racing) keeping his momentum in third on Day 1. The day was largely dry until the afternoon, when rain put paid to improvements in the latter half of FP2.

Another headline grabber was a huge highside for Marc Marquez (Repsol Honda Team) in the afternoon, although the Spaniard walked away unscathed and headed back to the box.

FP1
Viñales topped FP1 convincingly and consistently, and he did so just ahead of Pol Espargaro, who also impressed in the opening session of the weekend. The two were a tenth apart, with Alex Rins (Team Suzuki Ecstar) moving up to third late on, but the Suzuki man was 0.429 off the top.

The only crasher was Garrett Gerloff (Petronas Yamaha SRT) as he begins his first full weekend in MotoGP™, the Texan taking a tumble at Turn 7.

FP2
Viñales was again the fastest man on track, with a tenth and a half in hand over Oliveira before spits of rain became a downpour at the TT Circuit Assen. That left Quartararo third in the session and Marc Marquez fourth, before the aforementioned highside saw the number 93 crash out from behind reigning Champion Joan Mir. Mir completed the top five, ahead of Zarco, Rins, Jack Miller (Ducati Lenovo Team), Aleix Espargaro and Pol Espargaro.

Rins was 0.252 off Zarco, but from the number 42 Suzuki down to Danilo Petrucci in 11th was less than two tenths in another tight pack.

Once the rain came down there was a lull in track action for a while, but once it was fully wet many headed back out to get a taster, with sun not guaranteed for the rest of the weekend.

Combined timesheets
Viñales and Pol Espargaro remain the fastest duo as their FP1 times couldn’t be bettered, with Oliveira the man to gain big in FP2, slotting into a bit of space on the combined timesheets. His 1:33.400 was 0.091 better than Quartararo, who improved in the afternoon but remained fourth. Rins’ FP1 best slots the Suzuki rider into fifth.

Before his highside, Marc Marquez put himself into sixth overall ahead of Mir, with Zarco also improving in FP2 but the man second in the standings only taking P8 on Day 1.

Petrucci takes ninth ahead of Aleix Espargaro completing the top ten, both of whom went quicker in FP1. So did Nakagami and he’s the first man currently set to miss out on an automatic place in Q2, down in P11 on Friday, ahead of Miller, Savadori, Francesco Bagnaia (Ducati Lenovo Team) and Jorge Martin (Pramac Racing).

Will the rain return on Saturday morning? Or can the field expect some more dry track time in FP3 to crack into that all-important top ten? Find out from 9:55 (GMT +2), before qualifying for the premier class from 14:10.