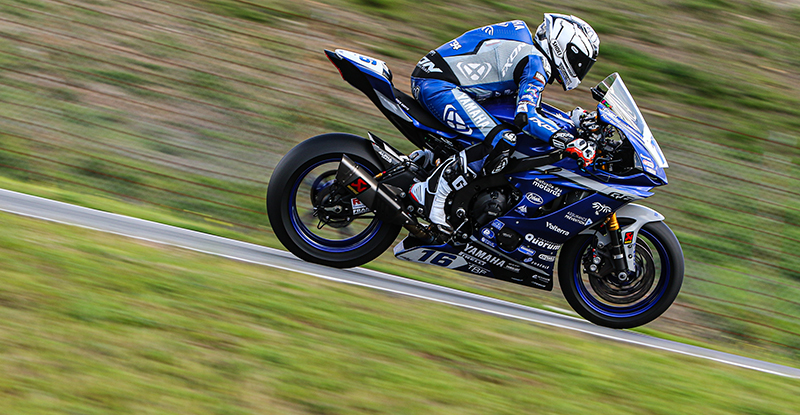 The three-time World Supersport runner-up heads to Phillip Island as the man to beat, leading a raft of rookies ahead of the new season.

It was a busy final day of testing at Portimao for the World Supersport riders and teams, as they looked to confirm their findings ahead of the first round of the season at Phillip Island, Australia. Going to ‘The Island’ as the man to beat is Jules Cluzel (GMT94 Yamaha), having romped clear at the head of the field from rookies Andrea Locatelli (BARDAHL Evan Bros. WorldSSP Team) and Steven Odendaal (EAB Ten Kate Racing). Despite numerous red flags, there were plenty of talking points.

Cluzel ended 2019 strong and he looks like picking up from where he left off, blasting clear by nearly three tenths of a second as testing ended. Andrea Locatelli’s first experience of Portimao proved positive, with the former Moto2™ front runner in contention with Cluzel despite the sizeable gap by World Supersport standards. Making it three different nationalities in the leading three positions, South African Steven Odendaal continued to get used to Yamaha and WorldSSP equipment and was less than four tenths from the rampant Cluzel.

Leading the charge to the top three positions, Lucas Mahias (Kawasaki Puccetti Racing) was the first non-Yamaha runner in fourth, taking his ZX-6RR to the fore as he continued to gel with the slick tyres. Fellow Frenchman Corentin Perolari (GMT94 Yamaha) made it three French riders inside the top five, whilst Philipp Oettl (Kawasaki Puccetti Racing) flew the German flag in sixth place, just under 1.5s from Cluzel at the front.

Japanese star Hikari Okubo (Dynavolt Honda) took the experience from his 2019 with Kawasaki to continue improving the CBR600RR, getting comfortable on the bike and declaring that the bike has the potential for wins in 2020. Can Öncü (Turkish Racing Team) made gains on day two to finish eighth, whilst Danny Webb (WRP Wepol Racing) was ninth as he continued his comeback to short circuit racing under the watchful eye of team manager, James Toseland. Jaimie van Sikkelerus (MPM Routz Racing Team) and Patrick Hobelsberger (Dynavolt Honda) were tenth and 11th respectively, both separated by less than two tenths of a second.