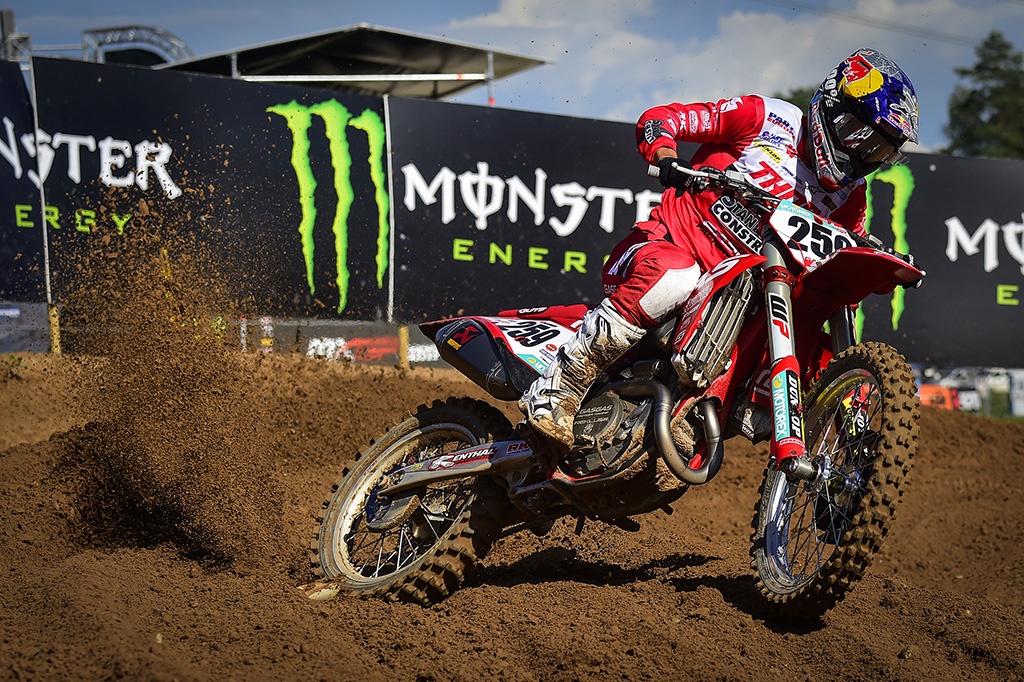 With sunshine and a crowd of excited fans the FIM Motocross World Championship officially made its return with some epic action from the MXGP and MX2 riders in Kegums for the MXGP of Latvia.

The MXGP of Latvia was the first of three events that will be taking place in Latvia, with the MXGP of Riga and MXGP of Kegums both due to take place next week, in the FIM Motocross World Championship’s first triple-header.

During lap 2, Coldenhoff was able to jump into the lead, while Red Bull KTM Factory Racing’s Jeffrey Herlings was down in P9, following a crazy crash in the Time Practice session.

On lap 4, Monster Energy Kawasaki Racing’s Romain Febvre was all over the back of Jorge Prado of Red Bull KTM Factory Racing and eventually found his way past the Spaniard to take 4th place.

As Gajser clinched the lead from Coldenhoff halfway through the race, Jasikonis was trying find a way past Desalle and Herlings, and as he passed the two riders a couple of laps later, then set his sights on 5th place.

With 5 minutes and 2 laps to go, Herlings was on a mission passing Prado, Jasikonis and breathing down Seewer’s neck. By the end of the race he managed to pass the Yamaha rider and move into 4th place where he finished.

In the end it was Gajser who won, with Coldenhoff 2nd and Febvre 3rd.

As the gate dropped for the second MXGP race of the day, it was the Factory GasGas machine of Coldenhoff that reached the FOX Holeshot line first, followed by Gajser and Seewer who were also quick out of the gate.

On the opening laps it was Coldenhoff who led Gajser, Seewer, Prado, Desalle, Febvre and Jasikonis, all while Tonus was not having the best of luck coming back from the back of the field.

Jasikonis, with a crowd of Lithuanian fans supporting him, was keen to put on a show as he moved quickly past Desalle for P5 and then Prado for 4th position.

As the top 5 continued to battle amongst themselves, Tonus found himself caught in more trouble as he crashed out and was left fighting from dead last.

A couple of laps later and Febvre was chasing down Jasikonis for 4th, as the two had a brief battle where they changed positions among one another for a couple of corners, though it was Febvre who came out on top in the end.

Antonio Cairoli of Red Bull KTM Factory had a tough day in Kegums as he made his way through the back end of the field, finishing 17th in the end.

But all eyes were on the 3 riders out front, with Coldenhoff, Gajser and Seewer all close together. During that point of the race it was hard to predict a clear winner with all 3 putting a lot on the line. As a result, Gajser may have pushed a little too hard and went down pretty hard in the wave sections.

This gave Coldenhoff a little bit of breathing room, though not for long as Seewer was straight on the back of him. In the last two laps we saw the GasGas and Yamaha factory riders locked in battle, though Coldenhoff was able to keep it cool and ended up as the race 2 winner.

Seewer finished 2nd with Febvre, Herlings, Gajser and Jasikonis who was 6th.

Overall, it was a historic day for GasGas and Glen Coldenhoff as they claimed the first race win and podium for the manufacturer. Tim Gajser was 2nd overall, with Febvre occupying the 3rd step of the podium, an incredible achievement for his first MXGP race of the year.

Despite missing out on the podium, Jeffrey Herlings still managed to hold on to the championship lead as we head into round 4 on Wednesday with the MXGP of Riga!

Glenn Coldenhoff: “It was an amazing second race, I did not make any mistakes and just did my own thing, in the end Jeremy was pushing hard and then I saw on his pit board pass for the win and I didn’t know where Gajser was so I really pushed hard for it and I’m so happy for the win”

Tim Gajser: “I was feeling great, riding was good in the beginning, it was not so easy to find a line to pass, so I followed Glenn for half the race and then I got really close so I tried to pass him then I switched the line on the waves and got sideways; I had a big crash, thankfully I could re-join. I tried to pass at the end, I tried to push for Jeffrey, but I couldn’t find the rhythm again. Overall, I’m happy, it’s just the first race coming back from such a long break, so I want to say a huge thanks to everyone”.

Romain Febvre: “It was good. This is my first MXGP race of the year, we came far with my injury and not racing the first two GPs, so I’m really happy about that and also for the team even if I want more. At some point I was faster and was catching the leaders at the end but the last few laps were complicated, finished 3rd twice so I’m happy to be on the podium.

The MX2 riders were the first to take to the line today with their opening race of the day. As the gate dropped it was the Red Bull KTM Factory Racing’s Tom Vialle with the FOX Holeshot followed by Jago Geerts of Monster Energy Yamaha Factory MX2, then came F&H Kawasaki Racing’s Roan Van de Moosdijk and Ruben Fernandez of SDM Corse Race Team.

Geerts then crashed out of second, dropping down to ninth position which meant he had a tough job on his hands to catch the leaders.

As Vialle continued to pull away from the rider in second, Rockstar Energy Husqvarna Factory Racing’s Jed Beaton was making his way back up from P20, despite starting in the top 10.

Geerts’ bad luck continued on lap 6, during which he went down, dropping from P9 to 22nd place. Then a few laps later and we were treated to a nice battle between Boisrame and Hofer who chased top positions. Though not long after Hofer dropped to P5 was Fernandez executed a pass on the KTM rider.

Meanwhile, Monster Energy Yamaha Factory Racing’s Ben Watson was locked in a battle with Maxime Renaux of S.M Action – M.C Migliori – J1 Racing. Watson then made a mistake and went off track though he did lose any positions straight away.

With 3 laps to go Vialle continued his lead, as Van de Moosdijk tried to keep a healthy distance, meanwhile Fernandez separated the two Kawasaki riders with Boisrame in 4th followed by Hofer, Watson, Renaux and Alvin Ostlund of Honda Assomotor was the rider in 8th.

In the end it was Vialle who crossed the finish line first, followed by Van de Moosdijk and Fernandez.

In race two, it was Vialle once again with a flyer out of the gate as he took the second FOX Holeshot here in Latvia, with Boisrame and Van de Moosdijk right there as well. Though Geerts was making quick moves and was in the top 3 by the end of the lap.

Band luck for Red Bull KTM Factory rider Rene Hofer who had a DNF in the second race due to a problem with the front wheel. While Beaton was having a much better race and was making moves in P8.

With a bad first race, Geerts was not wasting any time in the second race as he was moving quick to try passing Van de Moosdijk. A few laps later and Geerts was pushing for Vialle as they came around towards the start side-by-side. Geerts was able to find a gap and muscle his way past the Frenchman to become the new race leader.

While charging for Boisrame, Fernandez lost his balance and had a big crash which resulted in a few lost positions, though he made a good recovery and eventually finished the race in P7.

Towards the later stages of the race Watson was eager to catch Van de Moosdijk for 4th place, though after a few failed attempts, settled to finish 5th.

We were treated to a real last lap showdown, as Vialle pushed Geerts, eventually passing him as they crossed the line to take the 1 lap board, and while they made their way around the track, eager to win Vialle made a mistake allowing Geerts to jump back to 1st where he remained until the end of the race. Boisrame finished 3rdwith his team-mate right behind him in P4.

Overall it was Vialle who took the GP victory at the MXGP of Latvia with a double podium for F&H Racing as Moosdijk and Boisrame finished 2nd and 3rd respectively.

Tom Vialle: “I passed Jago on the last lap and he passed me again, I was really tired, the first race was good, the second race it was really hot and in Belgium the weather hasn’t been so hot so it was a little bit hard but it was perfect, to win overall I am very happy, a big thanks goes to my team for their hard work”.

Roan Van de Moosdijk: “I had two good starts in the top 5 and then I just stayed calm the whole day, it was really hot and I had some consistent speed. In the first race I got my best result in MX2 and in the second race, I had a small problem with my bike, but we managed to finish. I am now looking forward to Wednesday”.

Mathys Boisrame: “For me it was a good day, in the first race it was a little bit difficult because I broke my front brake in the start, then all race with no brakes is not easy and I finished fourth. In the second race I started in fourth, I was fast and just wanted to keep cool but overall it was a good weekend and I’m happy to be on the podium”.