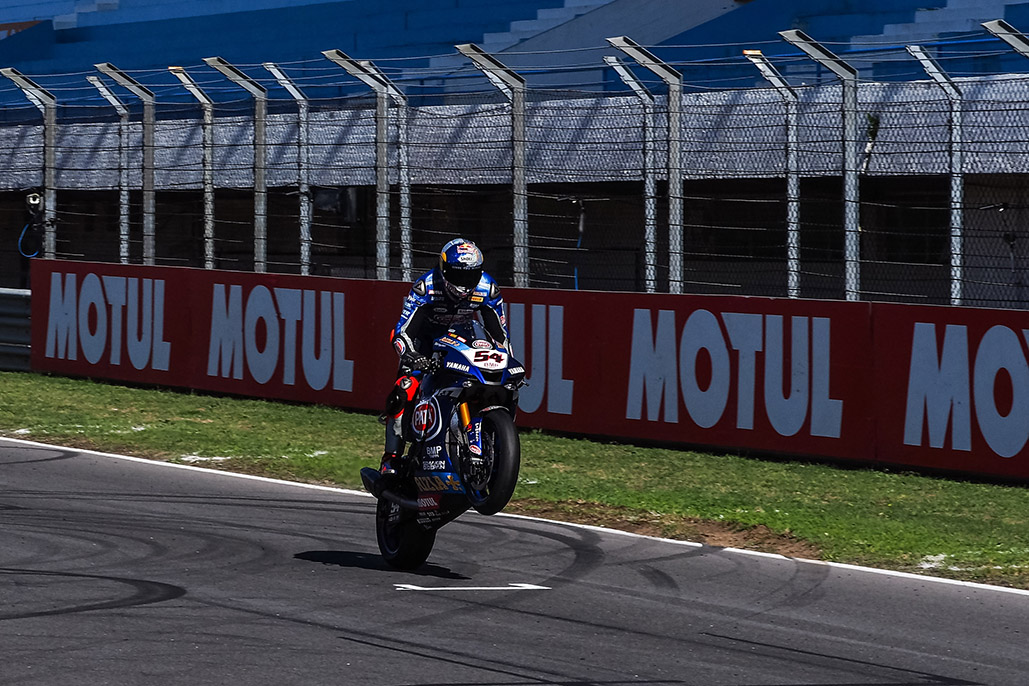 The records and the Championships keep coming for Jonathan Rea (Kawasaki Racing Team WorldSBK) as he secured his sixth consecutive MOTUL FIM Superbike World Championship, although the wait will go on for his 100th win as Toprak Razgatlioglu (PATA YAMAHA WorldSBK Official Team) took a stunning victory for the Pirelli Estoril Round at the Circuito Estoril, while challenge Scott Redding (ARUBA.IT Racing – Ducati) retired from the race with a technical issue.

Razgatlioglu made a good start from pole position and held first place as he converted his first career pole into his second win of the year; following on from his victory at the season-opening Australian Round. He was joined on the podium with Chaz Davies (ARUBA.IT Racing – Ducati) and American Garrett Gerloff (GRT Yamaha WorldSBK Junior Team) as they fought off Rea to secure a podium place.

Rea started from the middle of the grid following a crash in the Tissot Superpole session but soon found himself inside the top ten as he gained an impressive eight laps on the opening lap, and quickly improved his position on the follow lap as he passed teammate Alex Lowes and Michael van der Mark (PATA YAMAHA WorldSBK Official Team) at Turn 1 to move into the podium places.

He moved into second place as he made a move on Gerloff into Turn 1 but the American rookie was able to respond a few laps later, after Davies was able to make a move on Rea to move into second place. Rea and Gerloff engaged in a sensational battle for third during the remainder of the 21-lap race; allowing Razgatlioglu and Davies to pull away at the front as they finished first and second. Gerloff moved ahead at Turn 1 on Lap 14 and started pulling away from Rea as he secured his second career podium.

Rea finished the race in fourth place as he lost ground to the riders in front of him but had a large margin over fifth-placed Leon Haslam (Team HRC), who battled hard with Alex Lowes (Kawasaki Racing Team WorldSBK) and Alvaro Bautista (Team HRC); the Spanish rider had been fifth until Lap 20 before he crashed out of the race. Lowes finished in sixth place after being unable to catch Haslam on the last lap.

Argentinean rider Leandro Mercado (Motocorsa Racing) finished in the points as he secured a 13th place finish ahead of Takumi Takahashi (MIE Racing HONDA Team) and teammate Eric Granado; the Brazilian finishing in the points in his first WorldSBK appearance of the season. Sheridan Morais (ORELAC Racing VerdNatura) finished just outside the points with 16th, with Bautista being classified in 17th place ahead of Loris Cresson (OUTDO Kawasaki TPR).

Federico Caricasulo (GRT Yamaha WorldSBK Junior Team) did not finish the race after he crashed out in the second half of the race, with van der Mark not finishing the race after he came off his bike while battling for the podium. Redding retired from the race with a technical issue on Lap 6, effectively confirming Rea as a six-time World Champion as Redding had to win the race, while Matteo Ferrari (Barni Racing Team) did not finish the race.

P1 Toprak Razgatlioglu (PATA YAMAHA WorldSBK Official Team)
“Today I’m really happy because this morning we tried a new setup and I felt very good. For me, it was the first time qualifying in pole position. Today was a very good day and we are happy with another win and podium, but tomorrow we will see and try again for the podium.”

P2 Chaz Davies (ARUBA.IT Racing – Ducati)
“It felt good. The start was terrible but once I got going, it was a bit chaotic early on, but I managed to pick my way through. I was kind of marking van der Mark as we were fighting it out for third in the Championship. When he went down, that took a little bit of pressure off and I was able to run my own race, to find a way through Garrett and Jonny. I kept looking at Toprak, I was sort of hoping he would a bit drop dramatically but he had great pace. He disappeared in the early laps. Very happy with that to lock up third in the Championship. That was the goal this weekend, but I didn’t think I’d get it done today. After all the stress of the last few weeks, it’s nice to get this done and go into tomorrow with a clear head.”

P3 Garrett Gerloff (GRT Yamaha WorldSBK Junior Team)
“I was definitely trying to be on my tiptoes around Jonny, I didn’t want to cause him any problems or anything like that! I am honestly a little frustrated with myself because in the beginning of the race I was making stupid mistakes and riding like an idiot. I’m not normally like that, I’m normally more consistent so I definitely need to work on that for tomorrow. Really happy to be on the podium again for the whole Yamaha crew and the GRT team. It’s been a really cool last few races and to be back on the podium is nice, but it’s not as nice as the first time! I’m going to have to move up some places to make it even sweeter.”