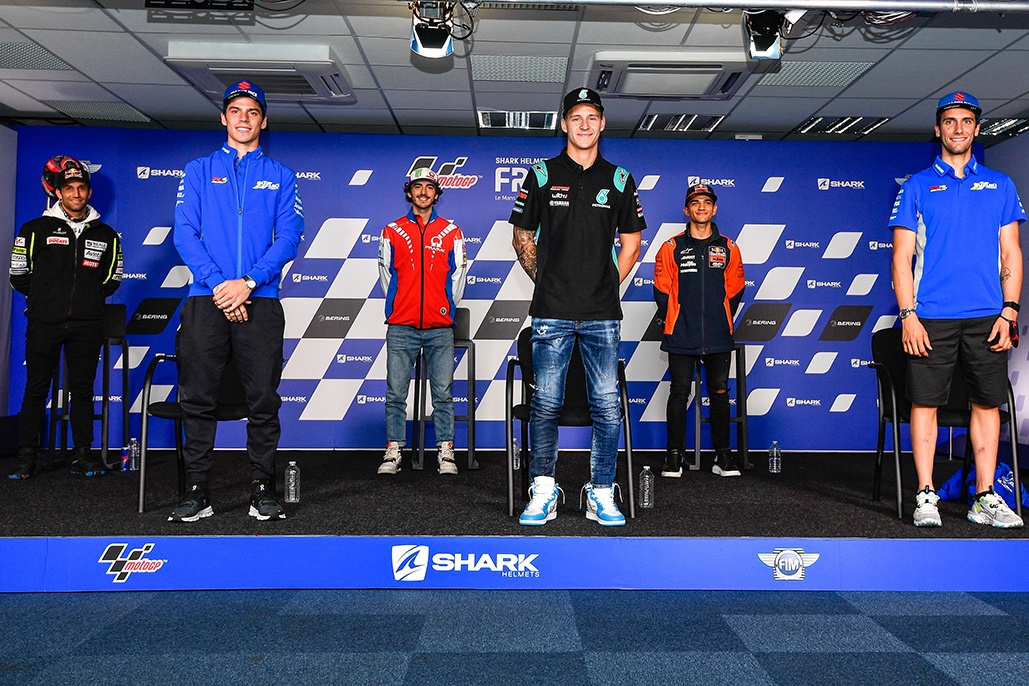 “Competitive, focused, consistent and fast”: Press Conference buzzwords ahead of the French GP.

Riders sit down to talk to the media as Le Mans gears up for the Shark Helmets Grand Prix de France.

Here are the key quotes from those present, with Quartararo up first as he gears up for home turf.

FABIO QUARTARARO: “Finally it was a great moment to have my third win in Barcelona and I think that was the most important. We had some difficult moments in Misano, Brno and Austria. It was great to be back at a track that I really like. Last year here was really positive, the result was not that great but in the race we showed our pace was really fast, if we check the lap time we had the pace for the podium. That’s really good, we hope for the same this year. I’m really confident, the weather doesn’t look that bad so I’m happy and confident to be here.”

Why did he not ride at the Portimão Test?

“First of all it was to avoid any kind of injury, I think it was a bit risky two days before doing three races in a row. I was there six years ago and also we have a long FP1 and FP2 when we’re there so that’s the reason I didn’t go to Portimao and also it was a different bike.”

On Joan Mir as a teammate back in Moto3™:

“For sure we are in a much better position than back then. That year, less for Joan, but for me it was a total disaster. It’s great that we keep a relationship since then and right now we are 1-2 in the championship, we were rookies last year and now we fight for the championship so it’s a cool story.”

Mir was asked about that first, too:

JOAN MIR: “Yeah, it’s so nice, I remember that year really well because it was not easy at the beginning because it was my rookie year. We both struggled a lot the first half the season and then at the end it was a bit better and my season was not bad for the first. But yeah, it is nice that both of us are fighting for the championship and I’m really happy.”

What’s his focus? Winning races or the title?

“Honestly, I think in the World Championship we are really close but to fight for the Championship you need to win races and that is a fact. At the moment we are competitive, focused, consistent and fast, but we don’t have a victory yet. I am fully focused on that, fully focused on trying to get my first victory. Meanwhile it is important to score points and continue this way and like I said, just focus on the victory.”

And finally, on Suzuki getting two machines on the podium last time out:

“It was so nice especially because both of us were on the podium and the celebration was all the team, so it was special like you said some funny moments and I expect to repeat it this weekend.”

Rins picked up from there…

ALEX RINS: “Yeah for sure it was super nice for both Suzuki riders to finish on the podium, then all the team were super happy because as you know, this doesn’t come from the work we’re doing now, it comes from the work they’ve done since they were racing. It was super nice to do a double podium in Montmelo. To celebrate with Ken, Davide and all the team it was super. In Suzuki the relationship is quite nice, it’s like a family.”

Next up, the Spaniard talked about his ongoing recovery:

“For sure the podium in Montmelo gave me extra motivation and power. About the shoulder, I would like to say I’m at 100% but still not 100%. I’m happy to not feel pain on the bone but with this sort of injury you have to stop and recover for 2-3 months to be perfect. We didn’t stop with this season full of races, on the bike I’m not feeling enough muscle on the right arm. So we need to finish this season and fully recover for next season.”

Bagnaia was first asked about his 2021 move to the factory Ducati team:

FRANCESCO BAGNAIA: “Very good! I’m happy I think I deserve this position because the races I have finished I have been strong and in front. We have done a great job this season. We have had a bit of bad luck with the broken leg and the engine failure so we are not in the position we deserve but I think our potential is very high, our bike is very strong, and we can be happy with the work we are doing. We need to be more consistent and finish the races, but we are there.”

And last time out?

“I’m not happy with the result because it was my mistake, Friday I was struggling with the conditions and it was my mistake not to adapt to the conditions. I started to move the settings on the bike too much. That Saturday I tried something different on the bike but it didn’t work and Sunday when I decided to go back to my standard bike I was strong in the race. Not in the first part because we already know Suzuki and Yamaha were better in the first part of the race because they heated the front tyre before and for us it was a little bit more difficult. And then in the last laps I closed the gap to the front. I think 3 seconds. So, we can be happy about the race but not happy with the weekend. My leg at the moment is riding at 100% but walking less.”

Zarco also began by talking about his 2021 machinery:

JOHANN ZARCO: “It makes me feel good to know where to go next year and on a winning bike. I still have many things to learn on the Ducati and from the last races, the work was good but clearly on Sunday I didn’t get good results. I still need to put things together but I believe I’m on the good way and thanks to Ducati, all the things I’ll do this season, will be useful for next season. I’m also happy for Pecco that with these three races that he did, he showed the factory team was for him. I have this step with the bike, getting a new bike but similar for next year. Happy and fully motivated, one year ago this was not the situation in October, I know where I’m going and that makes my target really clear.”

“The injury on the wrist was quickly getting well but then there are some ligaments that are still giving pain. I think it doesn’t disturb when riding but for the opinion of the physio, it’s disturbing a little bit the body is adapting and trying to compensate in another way. I think the not good results in the last races weren’t due to the wrist and still, as Alex said, when you have an injury you should stop for a few months but with our work you can’t. I’m feeling ok, still really taking care of it.”

And finally, is there any home pressure?

“At the French GP, the pressure is for Fabio I think, not for me. I have everything to win, we have 5,000 people here on Sunday which is better than nothing and it will give us some good energy. We will see the weather, not think too much and try to perform!”

First on Martin’s agenda was also 2021, when he’ll be moving to partner Zarco at Pramac.

JORGE MARTIN: “Super excited. After a long career I have finally arrived to MotoGP. It’s great, I’ve been racing with some of these guys in the past and I know them. I think it was the moment, I felt quite strong in Moto2 so I think it was the right moment to make the jump and I think going into MotoGP was my best option.”

“I think I have nothing to lose. I will try to win or be on the podium every race. I don’t have the pressure to make a mistake because my future is decided. I have the potential to win, not the Championship as I’m 71 points away, but for sure the top three is there and I will try to get into it.”