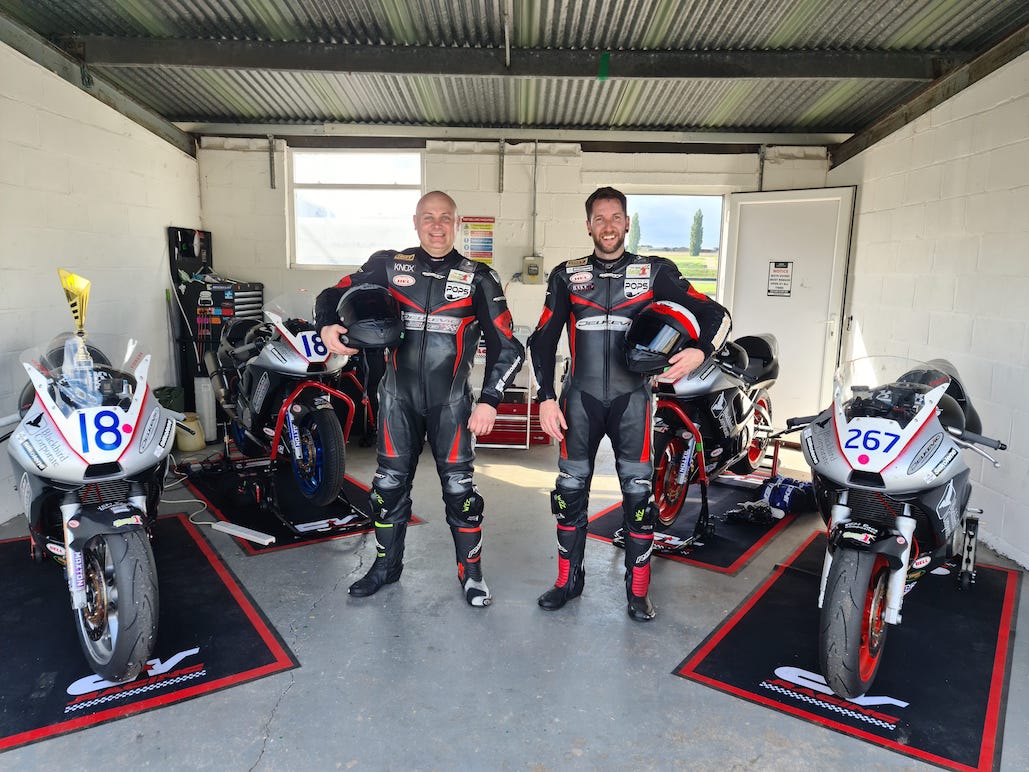 CV Racing took to the track at Mallory Park for the second round of the 2020 season with Thundersport GB.

Race one on Saturday was fast paced.  Chris was gaining in confidence each lap and set a new PB and took two seconds off his qualifying lap time, finishing 21st in class.  Carl had a great battle on track with the return of Nick Wainwright.  Carl finished 2nd in the Veteran Class (10th in the Supersport Class).

Race two and the battles continued.  Both Neil Schofield and Nick Wainwright keeping Carl on his toes, finishing 4th in the Veteran class (10th in the Supersport class).  Chris was continuing to gel with the bike and was battling with Matt Sayle.  During this battle the lead rider were coming through and Chris moved over to let them passed only for Matt to follow them through the gap.  Chris finished 24th in Class and continued to shave times off his laps.

Speaking to both riders, they both wanted to make improvements in the Sunday races.

For Sunday the weather was definitely on their side.  Chris did a change to his gearing which made the bike feel better and he was feeling more confident going into the first race of the day.

Race three didn’t end well for Carl.  Two laps from the end of the race his clutch was slipping massively and he was losing places fast.  He pulled in resulting in a DNF.  Chris had a great race, setting another personal best and finishing 20th in the Supersport class.

The final race of the weekend and with Carl’s clutch now fixed and Chris feeling confident after his last race, everything was to play for.

The racing was exceptionally close between Carl and Neil Schofield.  Carl taking 3rd in the Veteran class just 0.3 seconds ahead of Neil.  Chris was battling hard with Matt Sayle throughout the race, with some tight overtakes into turn one to ensure he held his position.  Chris set a 3rd personal best of the weekend and finished the race 20th in class.

Both Carl and Chris felt they could have made improvements on the weekend but overall were happy to both come away from Mallory with personal best times at the circuit.

Round three of the Thundersport GB championship will be at Oulton Park the weekend of the 26th September.