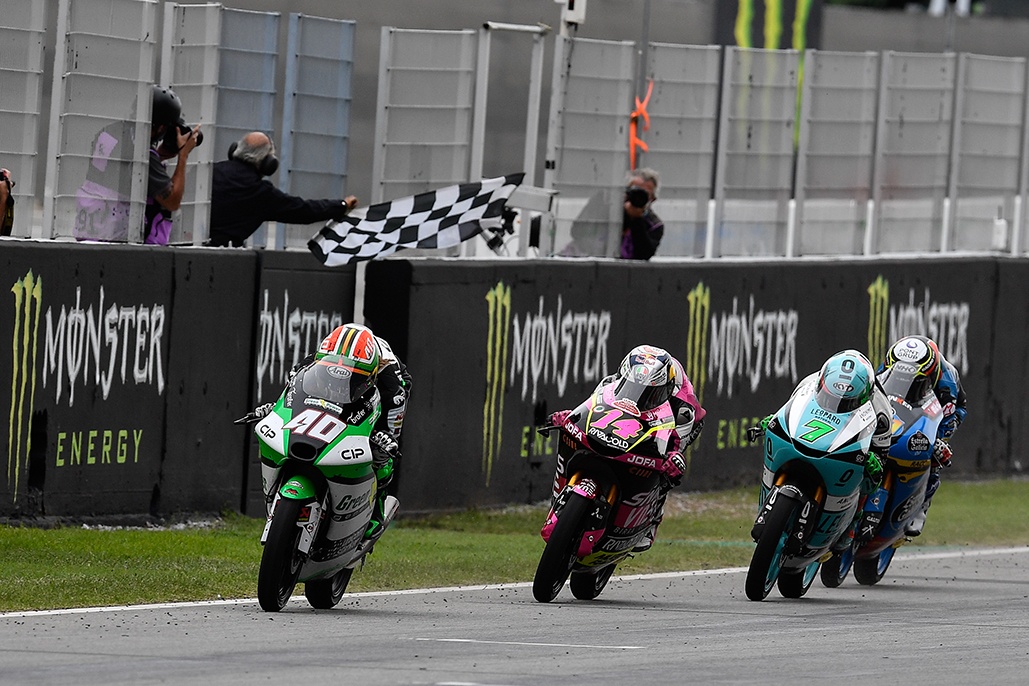 The South African takes to the top step for the first time as drama hits for some key Championship contenders.

Darryn Binder (CIP – Green Power) is a Grand Prix winner! The South African came out on top in another classic Moto3™ melee in Barcelona, escaping the clutches of Tony Arbolino (Rivacold Snipers Team) and Dennis Foggia (Leopard Racing) on the last lap to take his first victory. There was drama for the title fight further back though as John McPhee (Petronas Sprinta Racing) crashed out and collected former Championship leader Albert Arenas (Gaviota Aspar Tea, Moto3) and the ‘former’ gives a clue there as to what happened: Ai Ogura (Honda Team Asia), although only taking P11 faced with an open goal, is the new man in the lead.

Polesitter Arbolino launched perfectly as the lights went out and despite a huge run down into Turn 1, the Italian held off the fast-starting Gabriel Rodrigo (Kömmerling Gresini Moto3) and Arenas for the holeshot. Ogura made a storming start from P24 on Lap 1 too, up to P14 in what felt like the blink of an eye.

Arbolino led the opening couple of laps but it was slipstream city down the front straight and Arenas, Binder and McPhee were all up there fighting for the lead or close to it. On the long run down into Turn 1 for Lap 5, the top 19 were split by just 2.3 seconds.

Next time around was when the drama hit for the World Championship. Heading into Turn 4, McPhee was up the inside of Arenas as the pair sat P2 and P3, but the British rider then tucked the front as he was in slightly too hot… going down and collecting Arenas. Suddenly, it was an open goal for many and none more so than Ogura, who was immediately told via his pit board that both of his closest Championship rivals were out.

That left Arbolino leading Binder as a lead group of six formed, with Rodrigo, Sergio Garcia (Estrella Galicia 0,0), Jaume Masia (Leopard Racing) and Raul Fernandez (Red Bull KTM Ajo) ahead of the second group by a second. That gap was quickly being bridged by Foggia and Filip Salač (Rivacold Snipers Team) though as the duo were over half a second quicker than the guys ahead. Ogura was at the back of that group too, progress somewhat stalled.

Sure enough, it became a freight train once again. It was a 22-wheel fight as Binder retook the lead into Turn 1, with the South African, Masia and Foggia seeming to take turns. By five to go it was a Leopard 1-2 at the front ahead of Arbolino, Garcia and Rodrigo, and with two to go, Foggia was looking very strong at the front. Masia had dropped to fifth after Binder made a move stick at Turn 4, before the Spaniard then also got crossed up into the Turn 4 braking zone, just about keeping it on the asphalt but podium hopes gone…

Over the line for the final lap, it was Foggia who led and, crucially, the Italian also led into Turn 1. The first passing opportunity had been and gone for second-placed Binder, but opportunity knocked at Turn 5 and the South African was up the inside. A clean, slick move as Foggia lost two places in one corner, Arbolino also slicing through. Turn 10 then reared its head and we’ve seen drama there before, but Binder was solid and held P1. That meant, unless Arbolino could channel his inner 2009 Valentino Rossi, the race was pretty much done. Ultimately, Binder was fast through the final sector and kept it pinned to perfection, crossing the line ahead for his first Grand Prix win. Arbolino thought about a final corner move but was forced to settle for second and a third podium of the season, with Foggia losing out on a potential second win but the Italian happy to return to the podium for the first time since the Czech GP.

Garcia took P4 and his best result of the season, and right behind him there was another Spaniard picking up their best result of the year so far: Alonso Lopez (Sterilgarda Max Racing Team). It was a great ride from the Husqvarna rider to finish just three tenths from victory in his first top 10 of the campaign, which was also best finish since his podium in Thailand last year.

Romano Fenati (Sterilgarda Max Racing Team) backed up his Emilia Romagna GP victory with a solid P6, the Italian benefitting from two last lap penalties imposed on Masia and Celestino Vietti (Sky Racing Team VR46). The two exceeded track limits at Turn 9 and were each handed a one-place penalty, seeing Fenati finish ahead of both and making it P7 for Masia, P8 for Vietti. Niccolo Antonelli (SIC58 Squadra Corse) and Rodrigo completed the top 10, with Ogura having to settle for P11 but making some small gains… and taking over as Championship leader.

The Japanese rider now leads the way by three points heading to Le Mans, with 28 points separating Ogura from fifth place Vietti heading to the second of three triple-headers. Thankfully, McPhee and Arenas were both ok – although somewhat miffed – after the Turn 4 crash, and it’s game on in the lightweight class!

So that’s it from Barcelona, with yet more drama unfolding as we now have seven winners in nine races this year. The French GP is up next, so expect things to take another turn at legendary Le Mans!

Darryn Binder: “I’m super happy, this weekend I’ve felt strong all weekend and I managed to qualify semi decent for a change so I didn’t have as much work to do in the race. It proved in my favour because in Misano I got to the front but I ended up making a mistake in both races. But today I got to the front and was still able to be strong at the end. I’m so happy to finally win my first race. Too stoked!”