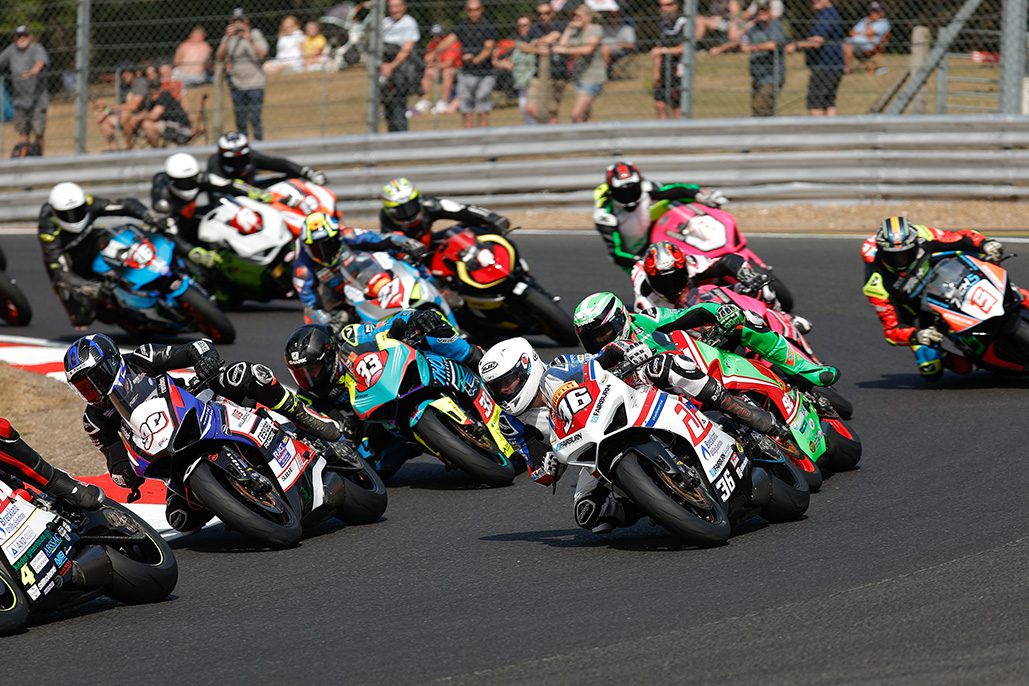 Race 1
David Shoubridge (Rich Energy Ducati) put his last-round disappointment firmly behind him on Saturday after taking the honours at Brands Hatch with a convincing start to finish victory. He was never challenged from the off and showed he was determined to put his hands back on the Championship trophy.

Second place finisher was Blaze Baker (Trackdemons Racing Powered by HMY), continuing to show what a valuable addition he is to the series. He was 3.4 seconds adrift of Shoubridge over the line.

David Shoubridge (Rich Energy Ducati #86) – 1st
“Well, what a race! I had to get that monkey off my back. Crashing out of both races last week at World Superbikes put me a bit on the back foot. Obviously I didn’t stop believing, I’ve been fastest here so far this weekend, the other guys are really pushing on, Blaze was incredibly fast for his first time here at Brands Hatch GP, it’s my home circuit, somewhere I know relatively well, thankfully the next round at Cadwell is probably my favourite circuit on the planet, we’ve got a couple of good strong rounds for me but I really needed to go out and get that win, I pushed on but didn’t really know where I was as my lap timer wasn’t working, it came up memory full just as I got up to the grid which was useful! So, I was a little bit lost out there so I didn’t know if I was on a fast lap or not. I tried to manage it as best as I could from the lap board but it’s quite a long lap to find out whether you’re doing alright or not. I just tried to manage the gap, got up to around three and a half seconds lead at one point which meant I could relax a little bit for the last few laps. It’s my Brother’s Birthday weekend so it was nice to get the big win. I’d just like to say thanks, a lot of controversy over Rich Energy at the moment but they’ve supported me nonetheless so big thanks to Rich Energy, thanks to everybody else that helps and one more thing I’d like to say to Matt Venn, unfortunately in warm up I accidentally collided with him at Hawthorns which meant he didn’t get out so hopefully he gets out in race two and I’m really sorry and thank you to everyone for their support.”

Blaze Baker (Trackdemons Racing Powered by HMY #51) – 2nd
“Really difficult race today, starting P3, we got a good start off the line and stayed in P3, so I said to myself to settle down a bit like Donington and we can follow the guys from there. It took a few laps then I hooked on the back of the front two and managed to pass Tom and I thought keep my head down and carry on pushing to try and catch David but unfortunately by that time the gap was too big. P2, first time here at the track so we’re looking forward to tomorrow, we’re going to do a few changes on the bike to make it more comfortable and hopefully to close that gap up to David. Huge thank you to my sponsors Trackdemons Racing, ATB Centre, without you guys it wouldn’t be possible, looking forward to tomorrow now.”

Tom Tunstall (MotorcycleRaceParts #21) – 3rd
“Perfect conditions. Shouey got a flyer, he’s been quick all weekend from the off. What became apparent pretty quickly was that I’d got the wrong gearing, I was using the wrong gears at bottom bend, turn one and on to the back straight and when Blaze came past it was clear, a bit closer but a similar deal, I let him go, I think it was less than a second by the end. If was a new PB for me on the bike, some lessons learnt to try on the bike tomorrow, not a bad day, can’t complain with that.”

Race 2
Shoubridge started from pole and grabbed the lead from the off but unlike the previous race Baker didn’t let him get away. Lap after lap they exchanged the lead, both setting their fastest laps on the final lap such was the pace at the front.

An early scrap for third place fizzled out once Tunstall overhauled the pack. By this time, it was evident the victory would be between two riders. Tunstall circulated alone for the remainder of the race to take the third step on the podium.

JDF Racing had some good fortune today with both their riders, Adon Davie and Max Lofthouse finishing fourth and fifth respectively. Rounding out the top six was Collins.

So that’s four podiums and three wins for Baker, next round will be another new track for the South African to learn, a track Shoubridge labels as his favourite, so expect another close battle, will Tom Tunstall get that elusive first series win? Plenty of questions awaiting an answer in a few weeks.

Blaze Baker (Trackdemons Racing Powered by HMY #51) – 1st
“What a weekend! A second and a first today in race two. It’s been absolutely magnificent. Coming here to Brands and not knowing the circuit and to come away with a double podium and a win it really has been something special. Looking forward to Cadwell and putting it back on the step!”

David Shoubridge (Rich Energy Ducati #86) – 2nd
“I’m relieved to get through the weekend with a first and second, thanks to qualifying we’ve managed to come away with the team trophy aswell so that’s really good. I’ve been blown away by Blaze’s pace this weekend, I thought I’d
have little extra in the bag in that race. I tried to ride a sensible race, sitting behind Balze to see what he had, see if he was faster anywhere, as it turned out he was doing the same game, he got out front, had a bit of a plan, whether he went all out on the last lap or had something se left in the tank, to do a 1.30.3 around Brands is quite fast, we both did our fastest laps on the last lap. Looking forward to going to Cadwell another place I’m really strong and see if we can regain the lead in the championship. Big thank you to Sublime for putting together the nice wrapped helmet for this weekend and also Rich Energy and Expel UK for backing me all the way.”

Tom Tunstall (MotorcycleRaceParts #21) – 3rd
“Today’s race was pretty tough, I got stuffed by two riders at the start and that took me a couple of laps to get clear, I lost a few seconds at that point but the pace of Shouy and Blaze, they were off, I seen a good race happening upfront! I pushed on for a bit but it was pretty clear unless they did something daft I wasn’t going to have a choice today, fair play to them both, running a very strong pace.”

So, at the halfway point in the series, Tom Tunstall heads the table with 152 points, still without a win, proving consistency is the key, not finishing lower than third all season.
Shoubridge’s 1st and 2nd has dramatically reduced the gap only 7 points. Baker’s amazing form has already placed him firmly in 3rd, 57 points behind Shoubridge.