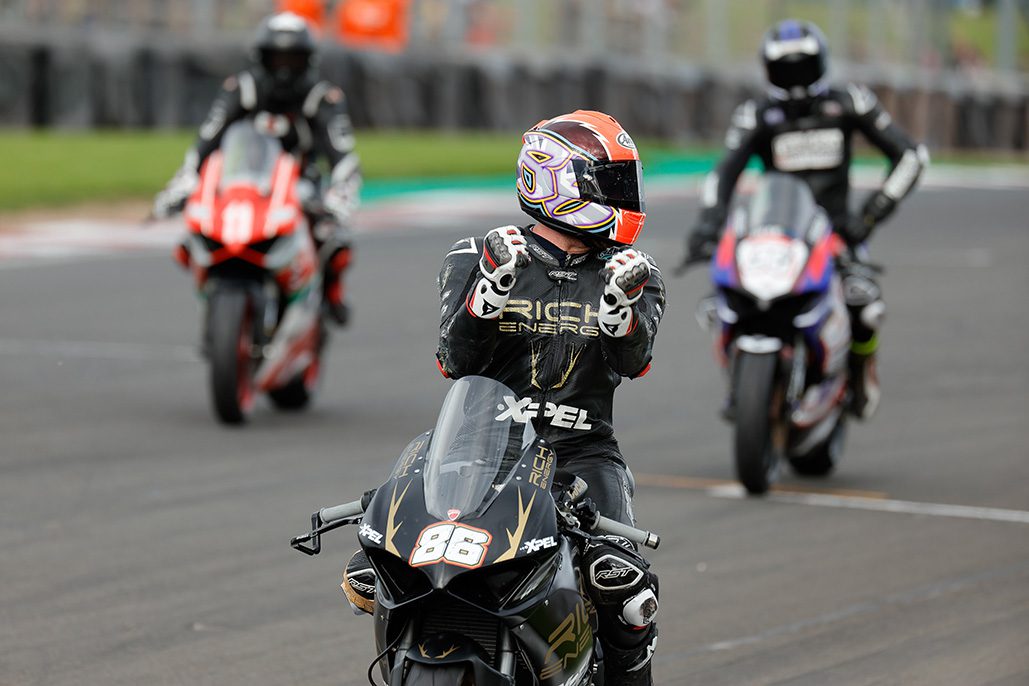 Race 1
David Shoubridge continued his dominant start to the 2022 Ducati Performance TriOptions Cup championship at Donington Park on Saturday with pole position, fastest lap and a third win on the bounce.
The Rich Energy Ducati rider led for the race entirety but could not shake Tom Tunstall (Motorcycle Race Parts). Tunstall managed to close the gap in the closing laps after Shoubridge started to suffer from arm pump, but had to settle for a strong second place. Rounding out the podium was Phillip Atkinson (Q-Oil Treatments / Unique Motorsport) who makes a welcome return to the Ducati Cup series this year after an absence of over two years.
Max Lofthouse (JDF Racing), Michael Tustin (AH Performance / Breckland Utility Solution) and Mark Bridger (Moto46) completed the top six finishers.
Race 1 video: https://youtu.be/ikx_G-_Mllc

Race 2
Shoubridge returned to the top step of the podium at Donington Park on Sunday, his fourth consecutive Ducati Performance TriOptions Cup win of the 2022 season.
He was joined once again by Tunstall and Atkinson, who finished second and third respectively to repeat their own performances from the previous race.
Tunstall briefly led the race at one point, but Shoubridge was dominant again, and aided by backmarkers in the closing stages, won with a 1.268s advantage. The two riders were in a class of their own, with a further gap of almost 20 seconds over the rest of the field by the end of the 15-lap race.

The fight for third place was an exciting one, with a group of riders jostling for position, but it was Atkinson who showed his form to claim his second podium position of the weekend.
Series newcomer Connor Rossi Thomson (Thompson Haulage / Connor Thomson Racing) scored an excellent fourth place. Lofthouse, Matthew Jones (Dragon Racing) and Tustin took fifth, sixth and seventh respectively, with the trio all within 0.566s of each other as they crossed the finish line.
Race 2 video: https://youtu.be/-41vsegVx3Y

David Shoubridge (Rich Energy Ducati #86) – Race 1 & 2, 1st
“The ‘double double’. I’m over the moon! That race I really had to work for. I actually opened up a bit of a gap, and unlike yesterday, I obviously got off to a really good start and saw a gap appearing and I thought I wasn’t going to let it get away. Saturday it was arm pump that caused it, but I have my old leathers on Sunday and no arm pump whatsoever. So, I thought that was all good. But I tucked the front at the old hairpin, it was my fault I caught the kerb. I had a properly big moment, by far, the biggest save I’ve ever been able to come back from, I can’t believe it. That meant Tom was back on my tail and pushing me all the way to the end. Then the backmarkers came into contention, and today, unlike yesterday, they sort of played into my favour. Brought it home but I actually thought there was one more lap to go so was relieved to see the chequered flag. Well chuffed, done the ‘double double’ and long may it continue.”

Tom Tunstall (Motorcycle Race Parts #21) – Race 1 & 2, 2nd
“Closer! He obviously got in front in that race, Shouey was pretty loose but still again he kind of held a bit of a gap. I kept the pressure on, and he made a couple of mistakes and got on the back of him and got in front. Just lost a bit of drive and then we were kind of on the back of him really, going into the closing laps. Just didn’t get the backmarkers right. Got one in between us, and then another in the last corner. I’m happy with the result and happy to be getting closer, happy that we’re giving him a run for his money, and we were leading the race. A little bit unhappy that I didn’t get the win. We’re getting closer, I think it’s a matter of time. But we’ll see. Good racing, and good fun.”

Phillip Atkinson (Q-Oil Treatments / Unique Motorsport #7) – Race 1 & 2, 3rd
“It was good. I got involved with a few people that time. Unfortunately, the leaders got away, and I got involved in a battle. It made me work for it that time, even harder, so I need to get to the front guys. But I never expected a double podium for my first time back. I’d just like to say a big thanks to Unique Motorsport, Q-Oil Treatments, and everyone else who’s helped me to get here. Two and half years is a long time, but I’m happy to be back and hopefully I can go another step-up next time.”