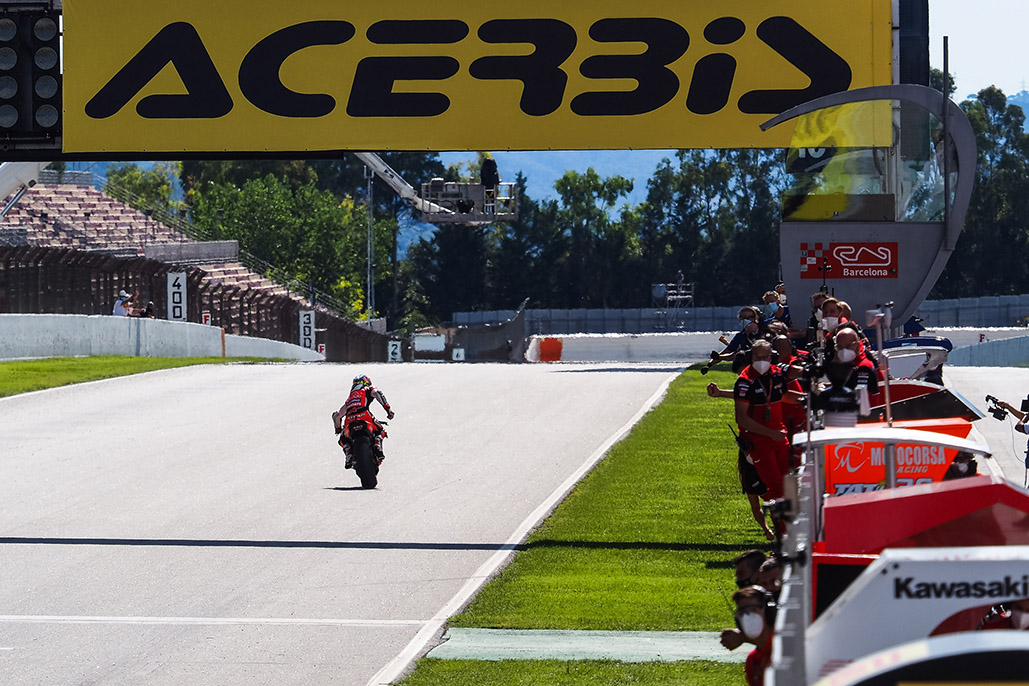 Race 2 from MOTUL FIM Superbike World Championship’s was full of drama and intrigue at the Circuit de Barcelona-Catalunya as Chaz Davies (ARUBA.IT Racing – Ducati) claimed his first win of the 2020 season and became the seventh different winner in 2020, while American rookie Garrett Gerloff (GRT Yamaha WorldSBK Junior Team) claimed his maiden World Superbike podium at the Acerbis Catalunya Round.

Davies was able to get to the front in the early stages of the races before taking the lead and controlling the race, withstanding pressure from Tissot Superpole Race winner Michael van der Mark (PATA YAMAHA WorldSBK Official Team) after the pair passed each other in the first half of the race. Van der Mark then fell into the clutches of Gerloff after the American made a sensational start from fifth place to run in the top three, putting pressure on van der Mark all race.

Gerloff passed van der Mark for second place on the last lap but a mistake from Gerloff on Lap 10 allowed the Dutchman through for second; Gerloff coming home in third place. Davies held on to win his 31st race in his career, equalling Colin Edwards on the all-time list of winners. Gerloff’s podium means he becomes the first American to stand on the WorldSBK podium since Nicky Hayden in 2016.

Championship leader Jonathan Rea (Kawasaki Racing Team WorldSBK) extended his lead at the top of the standings with fourth place, finishing five seconds clear of Tom Sykes (BMW Motorrad WorldSBK Team). Scott Redding (ARUBA.IT Racing – Ducati) finished in sixth place after being passed by Sykes with just a couple of laps to go. Rea had lost ground at the start, but was able to regroup to finish in fourth place and take a 51 point lead into the next round at Magny-Cours.

Eugene Laverty (BMW Motorrad WorldSBK Team) secured his best result of the season with seventh place as he showed more impressive pace, ahead of Alex Lowes (Kawasaki Racing Team WorldSBK) in eighth. Leon Haslam (Team HRC) was the sole Honda rider in Race 2 and finished in ninth, with Loris Baz (Ten Kate Racing Yamaha) in tenth after losing lots of ground at Turn 1 at the start.

Jonas Folger’s (Bonovo Action by MGM Racing) impressive wildcard weekend continued as he battled his way from the back of the grid to 11th place; Folger not setting a time in Tissot Superpole and missing out on a top nine starting grid for Race 2 by the smallest of margins. Federico Caricasulo (GRT Yamaha WorldSBK Junior Team) was 12th after starting from the back of the grid; Caricasulo penalised for irresponsible riding in the Superpole Race after a collision with Haslam

Alvaro Bautista (Team HRC) did not start the race following a technical issue on the sighting lap; the Spanish rider, who was declared fit following his dramatic highside crash in the Tissot Superpole Race, pulling off the track shortly after leaving the pit lane. Samuele Cavalieri (Barni Racing Team) crashed out in the early stages, while Sylvain Barrier (Brixx Performance) and Valentin Debise (OUTDO Kawasaki TPR) had a coming together on Lap 17 while battling for 15th place. Michael Ruben Rinaldi (Team GOELEVEN), who had been running in the top four for the majority of the race, had a technical issue in the latter stages of the race forcing him to retire from the race on Lap 19.

P1 Chaz Davies (ARUBA.IT Racing – Ducati)
“Amazing! What can I say? That was such a good race from start to finish. I had an amazing feeling with the bike. After yesterday and the Superpole Race a little bit, I was just constantly chasing something, and it was traction yesterday and it was zero. Today it was in my hands. It was a slippery track out there, but I think I had more grip out there than those around me and I was able to manage the tyre but go fast. Just so happy. First win as a dad, so I think it’s only right to dedicate this to my beautiful baby daughter and my wife.”

P2 Michael van der Mark (PATA YAMAHA WorldSBK Official Team)
“It’s been a fun Sunday, but I wanted to win this afternoon! I’m really happy with the race, I had a fantastic start and good speed straight away. I think Chaz and Rinaldi passed me, but I was just staying behind them, I didn’t want to destroy the tyres at the start. I had a good rhythm. I passed Rinaldi and tried to catch up with Chaz. I didn’t know it was Garrett who wanted to have a battle! I was a bit surprised by him and got passed again. I was trying to catch Chaz but in the middle part he was pulling away, in other parts I was closing in on him so we both had our strong points. At the end of the race, I was struggling so much with the front tyre and one lap before the end I made a massive mistake. On the last lap, it was Garrett again. I did everything to stay calm and into Turn 10 he ran a bit deep, so I got underneath. In the last three corners I had to be really smart and really stop the bike to finish on the podium again. Really happy with this second place and also an awesome race by Garrett, a well-deserved podium for him.”

P3 Garrett Gerloff (GRT Yamaha WorldSBK Junior Team)
“It doesn’t feel real! I’m trying to pinch myself. For a while, it didn’t feel like it would be possible this year, but to have it happen is just crazy. I don’t even have words! I’ve always dreamed of being on the podium in a World Championship and to have it happen, it’s like… it’s not real! I am kicking myself a little bit because if I wasn’t so stupid and just braked like I normally do into Turn 10 I probably would’ve made the corner and had second place. That’s something I’ll be thinking about for the next week and a half! I’m just so grateful that Yamaha gave me the opportunity to race in the World Championship, to Filippo in the GRT team for taking me on and being an awesome group of guys and girls, and for supporting me and always being positive. It’s been an amazing environment and I know I wouldn’t be here without them.”