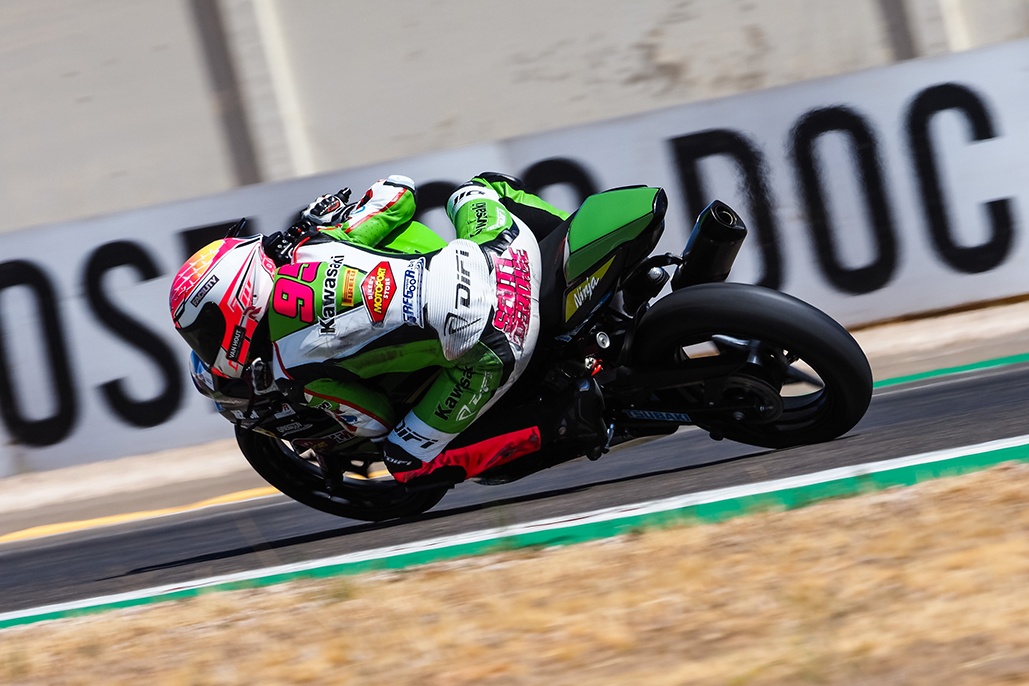 Action for FIM Supersport 300 World Championship got underway with two Free Practice sessions for the Pirelli Teruel Round at MotorLand Aragon, returning to the circuit just a week after two thrilling races. Scott Deroue (MTM Kawasaki MOTOPORT) drew first blood as he topped the combined timesheets as the Dutchman looks to return to the top of the Championship.

The Dutchman’s best time came in Free Practice 1, setting a 2’05.899s to top the timesheets on Friday, almost half a second clear of his next nearest rival in the standings. Inigo Iglesias Bravo (Scuderia Maranga Racing) finished the day in second place after a strong Free Practice 1 showing as he finished ahead of Thomas Brianti (Prodina Ircos Team WorldSSP300); the Italian rider being classified in third place as he continued to show impressive pace at MotorLand Aragon having secured a second place finish at the Aragon Round.

Tom Edwards (Kawasaki ParkinGO Team) finished the day in fourth place as the Australian looks to bounce back from a double Aragon retirement as he held off Ana Carrasco (Kawasaki Provec WorldSSP300) by just 0.034s with the 2018 Champion finishing in fifth place; Carrasco around half-a-tenth away from a top three spot after Friday running. Nick Kalinin (Battley-RT Motorsports by SKM-Kawasaki) was the highest-placed Group B rider of the day in sixth place; the Ukrainian rider lapping almost a second of Deroue’s fastest time.

Filip Salac (ACCR Czech Talent Team – Willi Race) was classified in 18th place on his WorldSSP300 debut. Free Practice 1 had been disrupted for Group B runners when Hugo de Cancellis (Team TRASIMENO) suffered a technical issue and track; with a Red Flag deployed due to track conditions while Adrian Huertas (ProGP Racing) and Gabriele Mastroluca (GP Project) both crashed at Turn 1.