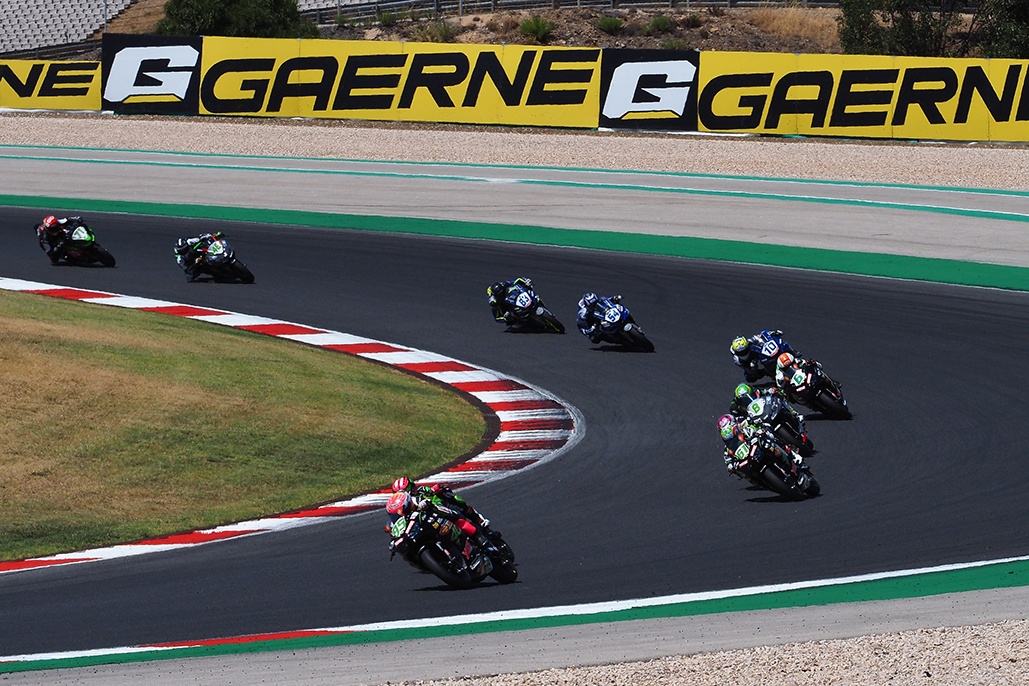 The on-track action from the Motul Portuguese Round came to an end with a thrilling FIM Supersport 300 World Championship race with a dramatic seven-way battle for the win which was won in dramatic fashion by Scott Deroue (MTM Kawasaki MOTOPORT) after a Red Flag was deployed with just two laps to go.

Ana Carrasco (Kawasaki Provec WorldSSP300) was able to get to the front of the field and had looked to be building a gap at the front. Deroue was able to close up a gap of around half-a-second to take the lead with about seven riders in contention for victory during the first eight laps of the 10-lap race. The red flag meant results were taken from the final timing point all riders crossed.

Deroue was able to hold on to the lead throughout the race despite challenges from numerous riders. Unai Orradre (Yamaha MS Racing) claimed second place during the dramatic race after battling his way through from the fifth row of the grid, with Yuta Okaya (MTM Kawasaki MOTOPORT) securing his first WorldSSP300 podium; following on from his history-making pole position from Tissot Superpole on Saturday.

Tom Edwards (Kawasaki ParkinGO Team) claimed a seventh place finish despite a dramatic finish after a crash with Ana Carrasco (Kawasaki Provec WorldSSP300); the pair colliding at Turn 5 with Carrasco unable to return back to the pits and therefore not being classified in the race. Thomas Brianti (Prodina Ircos Team WorldSSP300) finished in eighth place with Koen Meuffels (MTM Kawasaki MOTOPORT) in ninth. Samuel di Sora (Leader Team Flembbo) completed the top 10; just two seconds off the lead.

The race was red flagged after an incident between Meikon Kawakami (Team Brasil AD 78) and Tom Booth-Amos (RT Motorsports by SKM – Kawasaki) on the run from Turn 4. Booth-Amos almost came off his bike down the start and finish straight just moments before after clipping the rear of Okaya, but the British rider was able to continue after the incident with Okaya.

There was an incident at Turn 3 on Lap 1 as Maximilian Kappler (Freudenberg KTM WorldSSP Team) and Inigo Iglesias Bravo (Scuderia Maranga Racing) with the pair both retiring from the race before it really got going. There was also an incident between Hugo de Cancellis (Team TRASIMENO) and Nick Kalinin (Battley-RT Motorsports by SKM-Kawasaki); with both riders not finishing the race although Kalinin did ride his bike back to the pits.

P2 Unai Orradre (Yamaha MS Racing)
“It was a very, very difficult race. I’m so happy because yesterday we crashed. The track is difficult for the Yamaha bike, but I fought in the first group and the position is so important. Thanks to the team because they worked a lot yesterday after the crash, thanks to Yamaha and all my sponsors.”

P3 Yuta Okaya (MTM Kawasaki MOTOPORT)
“I’m happy to get my first podium in this class. The race was very fast, I was at the maximum of my limits to follow Scott and Ana, but they were riding well in this race. I want to say congratulations to Scott.”