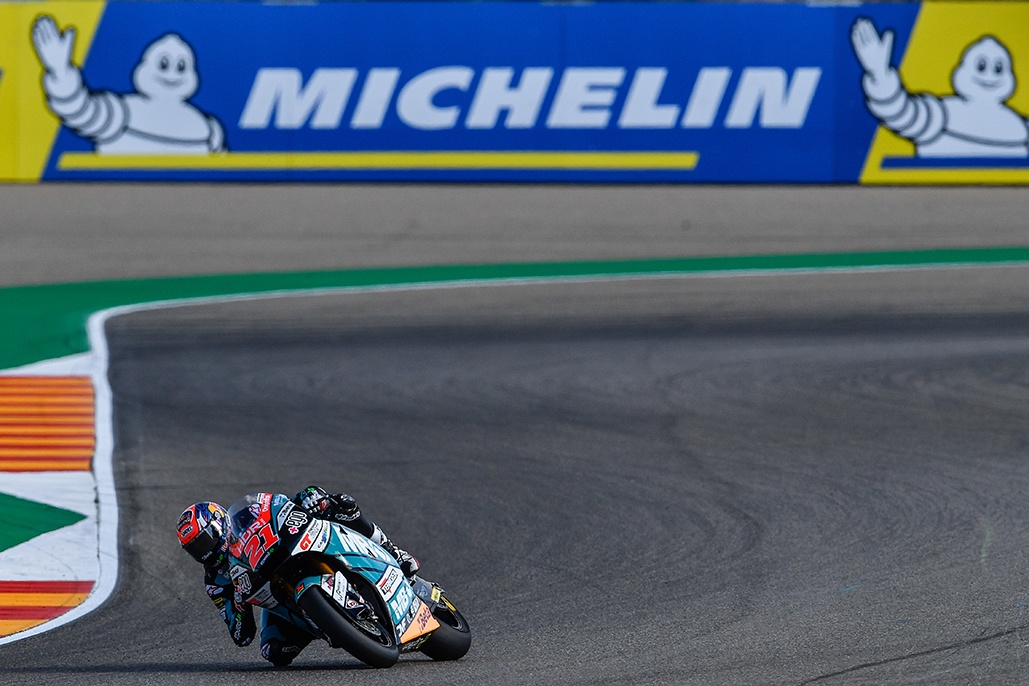 The top trio are split by just a tenth on Friday, with Marini and Bastianini also moving back up the timesheets in Teruel.

FP1
Sam Lowes finished FP1 in charge, the British rider’s 1:53.391 enough to fend off Marcel Schrötter (Liqui Moly Intact GP) by 0.052 seconds. The gap had been up to eight tenths earlier in the session, but the German was able to cut that down and so was third fastest Di Giannantonio. The Italian was within 0.058 of Lowes in a tight top three.

Championship leader Luca Marini (Sky Racing Team VR46) set his personal best time on his final lap to leap up to P4, 0.189 off Lowes, with Jorge Navarro (MB Conveyors Speed Up) completing the top five. Jake Dixon (Petronas Sprinta Racing), despite an earlier run off, ended the session in sixth.

Joe Roberts (Tennor American Racing) started his weekend in P7, the last man within half a second of the top. Hector Garzo (Flexbox HP 40) put in a solid showing to take eighth, ahead of Marco Bezzecchi and Jorge Martin (Red Bull KTM Ajo), who completed the top ten.

Lorenzo Dalla Porta (Italtrans Racing Team) crashed at Turn 2 and he was the only faller in the session. Lorenzo Baldassarri (Flexbox HP 40) suffered a bike problem at Turn 9.

FP2
The afternoon saw the top times tumble in Moto2™, but not for everyone in the field – unlike Moto3™ and MotoGP™. Di Giannantonio reigned by the end of play, the Italian pipping compatriot Marco Bezzecchi to the top by half a tenth after a late lunge. Before that, it was Bezzecchi vs Lowes for the fastest lap, the Brit holding it for most of the session before the Italian hit back. But ‘Diggia’ hit back last of all.

It was a great day for Edgar Pons (Federal Oil Gresini Moto2) as the reigning European Moto2™ Champion finished P4, the Spaniard 15th after FP1 but improving his time by over a second to leap up the timesheets in the afternoon to sit 0.031 ahead of Championship leader Marini in the session and overall. Thankfully for Marini, there seem to be few effects from his huge Le Mans crash seven days ago and he’s right in the hunt to make amends in Aragon.

Just behind Marini, in the session and the standings, came Enea Bastianini (Italtrans Racing Team). ‘Bestia’ produced a superhuman save at Turn 2 in FP2 and finished the opening day in P6, climbing from a P11 finish in FP1. Marcos Ramirez’ (Tennor American Racing) early FP2 time sees the rookie place P7 after finishing FP1 in P22, beating Remy Gardner (ONEXOX TKKR SAG Team) by just 0.001, with Martin and Roberts rounding out the top 10 in FP2 and overall.

Jorge Navarro is 11th by virtue of his FP2 time, with Schrötter P12 on the combined timesheets and the first man not to have improved – the German’s FP1 time quick enough to put him on the list of provisional Q2 entrants. Garzo was 13th quickest overall, with Jake Dixon (Petronas Sprinta Racing) rounding out those who stand to move through to Q2 as it stands.

That’s all from Friday, with all but a handful of riders across the class going quicker in FP2 than they did in FP1. Will Saturday morning shuffle the pack again? Find out at the later time of 11:25 (GMT +2) as Moto2™ take to the track for FP3.