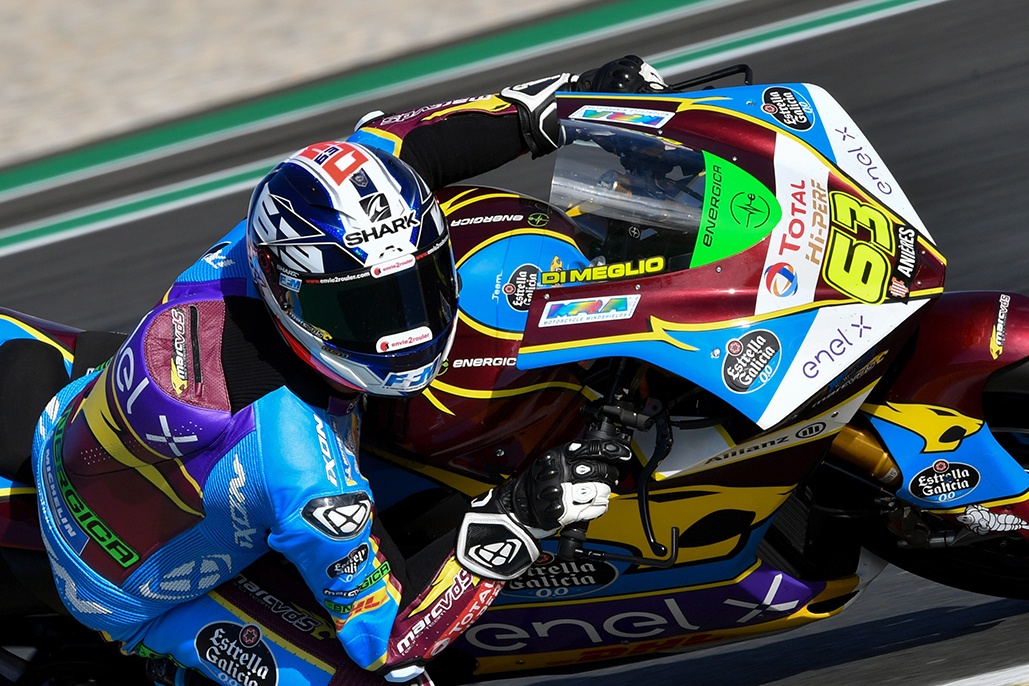 The Frenchman tops the timesheets as the FIM Enel MotoE™ World Cup heads into territory unknown.

Mike Di Meglio (EG 0,0 Marc VDS) staked an early claim on home glory at Le Mans on Day 1, the Frenchman topping Friday practice for the FIM Enel MotoE™ World Cup at the Shark Helmets Grand Prix de France. It was a close-run contest at the top, however, with Alex de Angelis (Octo Pramac MotoE) just 0.041 off as the Sammarinese rider completed his last Free Practice sessions before retirement. Mattia Casadei (Ongetta SIC58 Squadra Corse) was third quickest and the fastest of the top four Cup contenders.

The day was a tale of two halves for the electric class, with a wet FP1 giving way to a dry FP2 – and the latter therefore becoming even more vital, as Saturday’s forecast for E-Pole and the race looks to be dry. In the wet morning session though there was data and experience to be gained, of the venue and the machinery in the wet for some, and everyone headed out.

De Angelis was the fastest by far: 0.451 clear, the Sammarinese rider was in a class of his own in the wet. Xavier Simeon (LCR E-Team) was second, with reigning Cup winner Matteo Ferrari (Trentino Gresini MotoE) just under a tenth in further arrears as he completed the wet-weather FP1 top three. Casadei crashed at Turn 7, rider ok.

Once the sun had almost returned and the track dried out, there was another shuffle on the timesheets and the FP2 times became the combined times as everyone improved. Di Meglio more than most, the Frenchman moving from P11 in the morning to fastest overall. De Angelis completed his consistent Friday in second as he found even more speed in FP2, with Casadei moving up from P9 in FP1 to complete the top three – although he did suffer another tip off, this time at Turn 4.

Simeon showed good speed overall on Day 1, taking fourth overall and only 0.035 off Casadei, with the timesheets remaining tight thereafter. Ferrari was just 0.049 further back in P5, with Niccolo Canepa (LCR E-Team) slotting into sixth only 0.011 off the points leader.

Josh Hook (Octo Pramac MotoE) was seventh by less than a tenth, the Australian having had some success in the 24h race at the venue and his MotoE™ speed also impressive on Day 1, with Cup contender Jordi Torres (Pons Racing 40) down in eighth. Niki Tuuli (Avant Ajo MotoE) put in a solid day’s work to end Friday less than a tenth off Torres, in ninth, and the Finn was a whole 0.381 ahead of the man in tenth: Dominique Aegerter (Dynavolt Intact GP).

Aegerter is only four points off leader Ferrari in the standings and the Swiss rider will want more on Saturday. He’ll also be heading out in E-Pole – with the fastest on the combined timesheets going out last – a little earlier than he’s used to, which could make for a nail-biting session. Eric Granado (Avintia Esponsorama Racing) is another further down than expected as he ended the day in P11, so qualifying will be a stunner.

The stage is set for the final E-pole of the season, with plenty on the line at the earlier time of 11:45 (GMT +2) on Saturday morning. That decides the grid for Race 1, with the lights going out for that first race of the weekend later in the day at 16:20. Will we crown a Cup winner on Saturday? We’re about to find out!