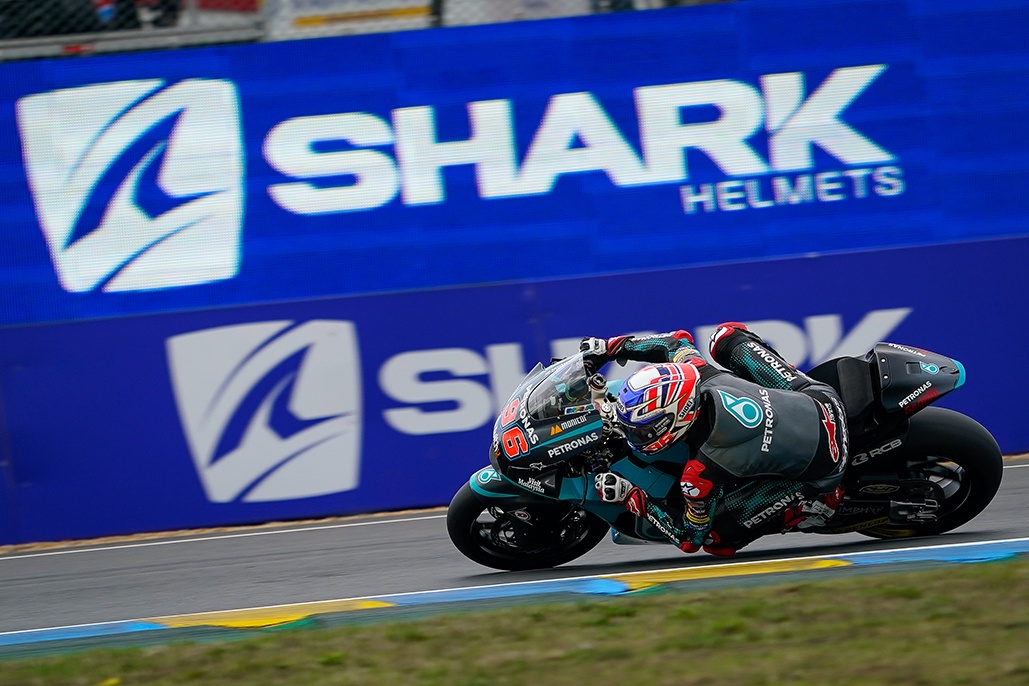 Jake Dixon (Petronas Sprinta Racing) put in a superlative performance on Day 1 at the Shark Helmets Grand Prix de France to top the timesheets, pipping Jorge Martin (Red Bull KTM Ajo) to the honour as Yellow Flags caught the Spaniard out on a late charge. Marco Bezzecchi (Sky Racing Team VR46) completed the top three, although it was his teammate and Championship leader Luca Marini (Sky Racing Team VR46) who stole the headlines for different reasons. The number 10 suffered a huge highside early on in FP2, heding to hospital for a check up but ultimately declared fit.

FP1
Kasma Daniel (ONEXOX TKKR SAG Team) took to the top near the end of a crash fest Moto2™ FP1, the Malaysian impressing to take the reins ahead of Hector Garzo (Flexbox HP 40) and teammate Lorenzo Baldassarri, the latter only another 0.003 in arrears.

Fourth went to American Joe Roberts (Tennor American Racing), an oft-quick presence on the timesheets in the wet, with that also something to be said of the man just behind him: Jake Dixon, who ended the session 0.572 off the top. The Brit was leading until some late charges, getting shuffled down thereafter.

Jorge Martin was sixth in the morning ahead of Bezzecchi and Le Mans specialist Tom Lüthi (Liqui Moly Intact GP), with Nicolo Bulega (Federal Oil Gresini Moto2) and Hafizh Syahrin (Inde Aspar Team) completing the top ten, the latter the early leader in the session by some whopping margins before Bulega had hit back mid-way through.

Incident wise, the first to go down was Championship leader Marini as he exited pitlane and then promptly slid out at Turn 3 for his first crash of the day. Andi Izdihar (Idemitsu Honda Team Asia) then went down at Turn 14, before the same happened to Marcel Schrötter (Liqui Moly Intact GP) as both highsided. Termozeta Speed Up’s Jorge Navarro then came a cropper at Turn 9, before Lorenzo Dalla Porta (Italtrans Racing Team) at Turn 14 and Somkiat Chantra (Idemistu Honda Team Asia) at Turn 8 – the three incidents in the space of 40 seconds.

NTS RW Racing GP’s replacement rider Piotr Biesiekirski crashed not long after at Turn 14, before early leader Syahrin hit the deck at Turn 3. Kasma Daniel then crashed at the same place five minutes later, although he’d go on the bounce back in some style. Fabio Di Giannantonio (Termozeta Speed Up) next went down at Turn 14, and Izdihar had a second crash there soon after. Finally, Sam Lowes (EG 0,0 Marc VDS) crashed at Turn 9 and Joe Roberts at Turn 4.

Di Giannantonio and Biesiekirski will be assessed ahead of FP3 to see if they are able to take part in the rest of the Grand Prix.

FP2
The conditions were much improved by the time it came round to FP2, making the session timesheets effectively also the overall standings. The session still started with plenty of drama on a drying track, however, with FP1 pacesetter Kasma Daniel suffering a highside at Turn 11 before we then witnessed Marini’s huge crash coming over the brow of the hill at Turn 5. The Italian was absolutely launched off his bike and the machine then slid through the wet grass and back onto the circuit, bringing mud onto the racing line. That brought out the Red Flag as Marini limped away with the help from the marshals. The Italian was transported to the medical centre immediately thereafter, and then had a check up at hospital before being declared fit to continue.

Back on track after the Red Flag, Xavi Vierge (Petronas Sprinta Racing) was top of the pile first off before Sam Lowes (EG 0,0 Marc VDS) took over, with Marcel Schrötter (Liqui Moly Intact GP) then setting the fastest time of the day. The times were tumbling all the time though, and the ever-improving Dixon sat quickest late on. There he would stay, ultimately, as Martin was slamming in a serious laptimes – but it was deleted for Yellow Flags in one sector of his lap.

That leaves sophomore Dixon fastest in the intermediate class on Friday, and after finishing FP1 in P5. Martin takes second overall ahead of old Moto3™ foe Bezzecchi, who went from seventh in the wet to third overall. Lowes is once again up at the sharp end after Day 1 at Le Mans, up to P4 on the combined timesheets from his P19 finish in the tricky FP1 conditions.

Lowes’ teammate Augusto Fernandez makes it two EG 0,0 Marc VDS machines in the top five as he too found the going a little less tough than FP1, with Termozeta Speed Up’s Jorge Navarro another rider who moved much higher up the timing screens in the dry, the Spaniard finishing FP2 and the day in P6.

Rookie Aron Canet (Inde Aspar Team Moto2) claims P7 on Day 1 at Le Mans, under two weeks from right arm pump surgery, after ending FP1 in P26. Lüthi managed to get the better of teammate Schrötter as the Liqui Moly Intact GP squad ended the day in P8 and P9, with Vierge rounding out the top ten.

Chantra, Roberts, Stefano Manzi (MV Agusta Forward Racing) and second in the Championship Enea Bastianini (Italtrans Racing Team) are the final four currently set to move through to Q2, but everything can still change in FP3…