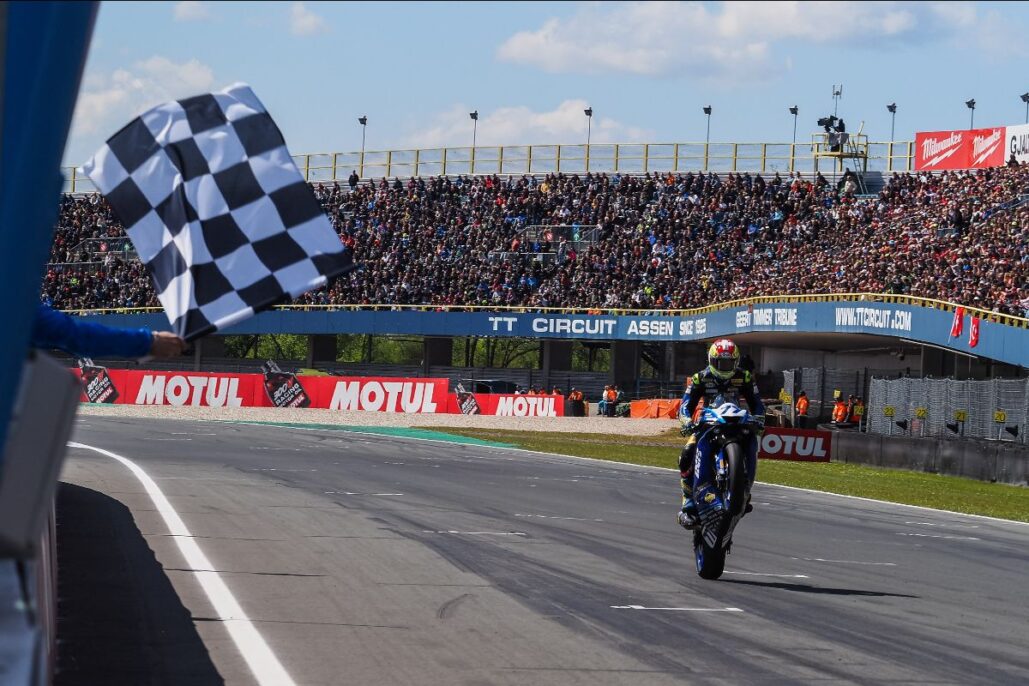 Dominique Aegerter (Ten Kate Racing Yamaha) repeated his 2021 successes at the Motul Dutch Round, claiming wins in both races at Assen. In Sunday’s Race 2, Aegerter had lost time at the start and found himself down in fourth place, but soon found himself fighting back. The race-winning overtake came on lap 9 of 18 with the Swiss rider overtaking title rival Baldassarri at the final chicane before going on to open a gap of 2.6s at the end of the race. After securing back to back wins, Aegerter said: “Perfect weekend. Pole position, two times the fastest laps, two victories… The maximum I could get. We have the perfect start to the season with 95 points, nearly all what I can get. I like this track here in Assen. The weather was perfect, just a little bit windy. The team made a perfect job, they set up the bike in every condition, also the tyre and the gearing for the wind. I had a very fast bike which was easy to ride.” After his successful weekend, Aegerter extended his Championship lead to 30 points.

Lorenzo Baldassarri (Evan Bros. WorldSSP Yamaha Team) claimed second place as he bounced back from a Race 1 crash to finish on the podium after making his way up the grid. He commented: “After yesterday, I needed a good race like today, I needed points. With Domi, it was an interesting race until he started to push, Bulega overtook me, and I lost those crucial meters. Dominique was going fast, and I was taking too many risks to try to follow him. So, I decided that second would be enough for today.”

Can Oncu (Kawasaki Puccetti Racing) had a great start as he led the first few laps to eventually finish third. He explained: “We crashed yesterday but did a good job today. I’m sorry for yesterday but we are back again today. I pushed a little bit more in the straight to open a gap. Then Aegerter and Baldassarri passed me. This podium is important for the Championship, but a win would be better. I will try to win in Estoril.”

Aegerter leads the Championship standings with 95 points, with Baldassarri in second and Bulega in third. The two Championship leaders reacted to the standings. “I wasn’t expecting to have nearly 100 points after four races. I was a little bit nervous about how the new regulations will be, or the bikes. Now we can see that they have a very similar level and it’s nice to have different manufacturer in Supersport. They can already fight with us” said Aegerter.

Meanwhile, Baldassarri relishes the challenge ahead of him: “The target was to be fast and constant here and loose the less possible points to Dominique. From the next races, we can fight for win and podiums. We have to be there and constant every race. We need to focus on improving me, the team and the bike.”