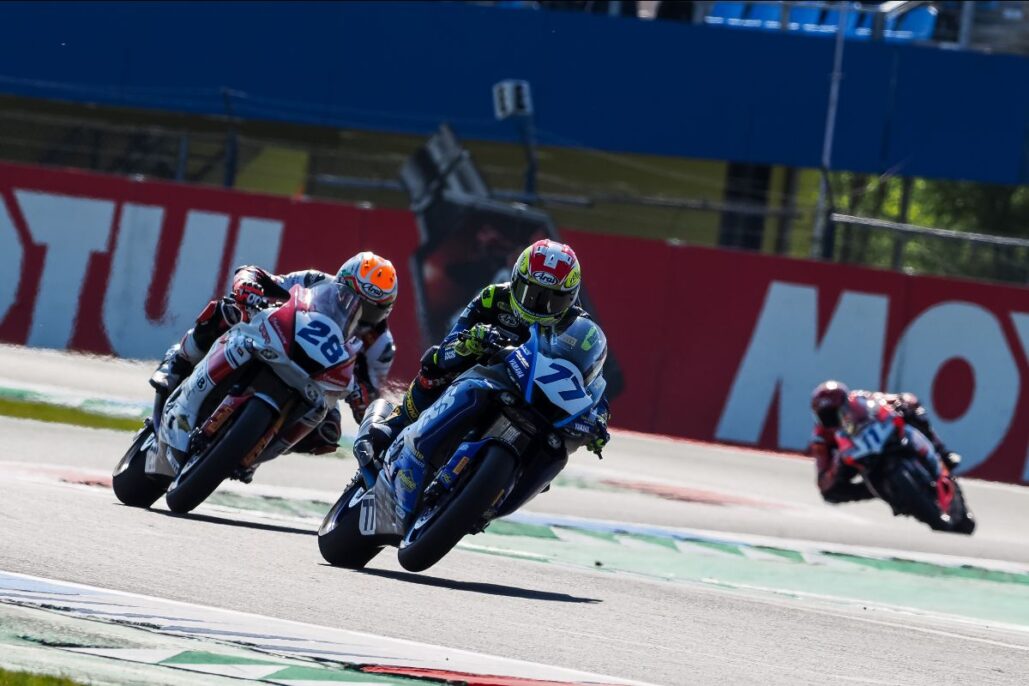 Dominique Aegerter (Ten Kate Racing Yamaha) won Race 1, despite the race being red flag with five laps to go. When the red flag was shown, and the results taken from the last timing point, Aegerter’s margin of victory was just 0.081s. He declared: “I’m really happy with the 25 points. The Red Flag came out five laps before the end of the race so I was surprised. I had a very good pace, also this morning with the Superpole new lap record. Ten Kate Racing Yamaha made a fantastic job and I’m super happy to give them a victory at their home round.”

Glenn van Straalen (EAB Racing Team) finished second, claiming his first ever podium in the category for his home round. Van Straalen had taken the race lead in the early stages until Aegerter made his move through the right-hander of Turns 13 and 14 on Lap 14 of the scheduled 18. The Dutchman said: “It was tight. We left the race with the two of us. My start was not so good so I need to come from far, but I made it to the field and then it was just the three of us. Aegerter followed me on the pace. It was very nice to lead the race at your home round. We have a good pace and I’m happy with that. We will try to find something in the race data and be better tomorrow.”

Nicolo Bulega (Aruba.it Racing WorldSSP Team) had a good start as he led the race in the early first laps before being demoted to third place by Aegerter and van Straalen. The Italian rider claimed his second podium of the season. He said: “It was a good race for me with another podium in the end. I’m happy about the race, especially the first laps because I was leading the race. The last laps I started to lose a little bit of time. We need to find solution for when the tyres start to drop. But we are here.”

To note:
Lorenzo Baldassarri (Evan Bros. WorldSSP Yamaha Team) withdrew from the race at the end of Lap 4 after a Turn 10 crash.

Can Oncu (Kawasaki Puccetti Racing) had a crash at Turn 7 and was out of the race also in Lap 4.