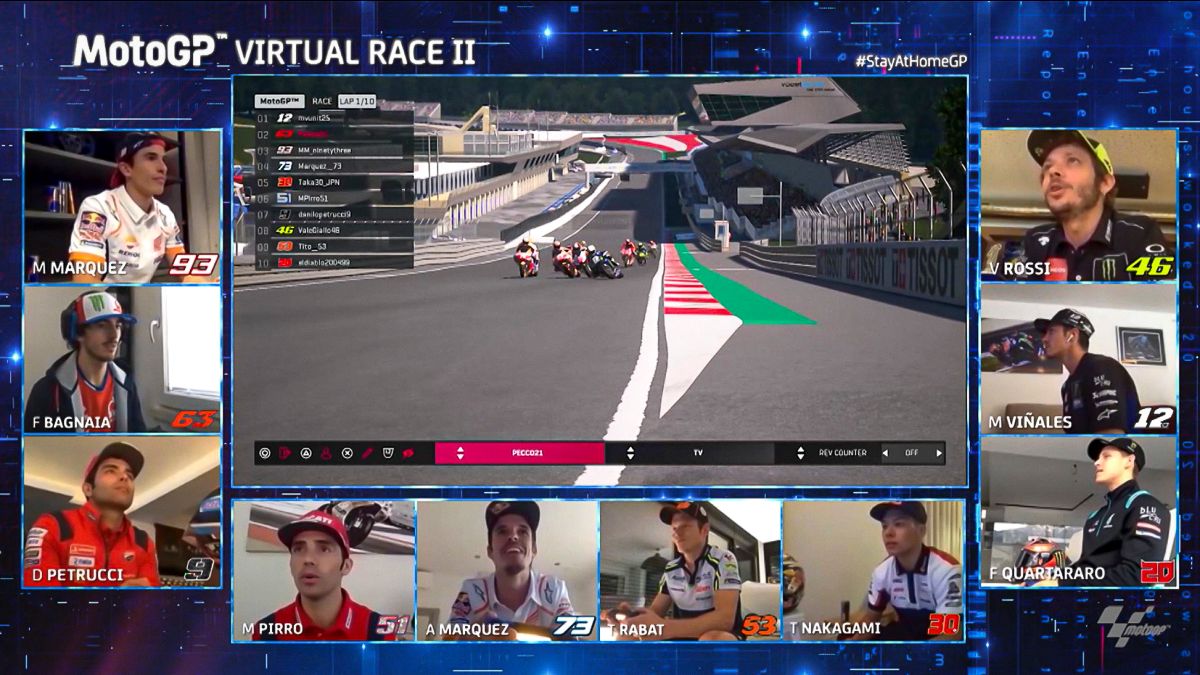 A look through the numbers as MotoGP™ Virtual Race 2 makes more record-breaking history and a first ever Virtual Grand Prix is announced.

After the incredible success of MotoGP™’s first ever Virtual Race, a second event was announced and Virtual Race 2 was broadcast on Sunday the 12th of April. From Marc Marquez (Repsol Honda Team) and Fabio Quartararo (Petronas Yamaha SRT) to Danilo Petrucci (Ducati Team) and Valentino Rossi (Monster Energy Yamaha MotoGP), the line-up was star studded and the race action packed as the grid took on the Red Bull Ring in Austria.

Feedback on the Virtual Races from the MotoGP™ community, fans, partners and more has only continued to grow. 29 broadcast partners showed the second event, with titans of sports broadcasting beaming the race to audiences around the world. Partners such as Sky Italy, Canal+ in France, DAZN (in Spain, Italy and DACHS), BT Sport in the UK, ServusTV in Austria and Germany, Viasat in Sweden and many more showed the event in Europe, whilst the Americas received coverage thanks to the likes of NBC in the USA and Fox Brazil and ESPN in Latin America. Fans further east could enjoy coverage from partners including Motorsport TV Russia, Eurosport India and Fox Asia, with those Down Under covered by Fox Australia and TEN. SuperSport also broadcast the event in Africa, meaning the second MotoGP™ Virtual Race once again reached every inhabited continent on Earth – as did the first!

Reach and engagement were also impressive across social media and online, with a marked increase across the board. 520 pieces of digital content were created around the event – including the full broadcast – for a total of 75 million impressions as teams, riders and MotoGP™ got involved. That’s an increase of 25% on the first Virtual Race, with video views also increasing from 13 million to 14 million and the live second race itself gaining views to hit 3.2 million. Once again, more than 2.5 million interactions were made with content related to Virtual Race 2 as well, with fans finding plenty to talk about! In total, that all adds up to a grand total of 8.5 million minutes of Virtual Race 2 content that were viewed – an increase of over a fifth.

There’s not too long to wait to see more showstopping action, either. On Sunday the 3rd of May – the original date for the Spanish GP – another world first will be broadcast: the Red Bull Virtual Grand Prix of Spain. The event is to show solidarity with and in aid of the Official Charity of MotoGP™, Two Wheels for Life, supporting their efforts in the fight against Covid-19. It will begin at 15:00 (GMT +2) and will see all three Grand Prix classes – MotoGP™, Moto2™ and Moto3™ – compete in a unique three-race online event.

Premier class teams can field one rider each, with the exception of the Repsol Honda Team, who can enter two as reigning MotoGP™ Champions. In Moto2™ and Moto3™, ten riders can enter in each category, with the right of entry given in Championship order following the QNB Grand Prix of Qatar. Who will it be? All will be revealed as the event approaches…

Catch up on anything you missed from the first and second editions, including plenty of behind-the-scenes content, and then stay tuned at motogp.com, esport.motogp.com and across social media for more as the Red Bull Virtual Grand Prix of Spain gets closer and closer and more details are unveiled.