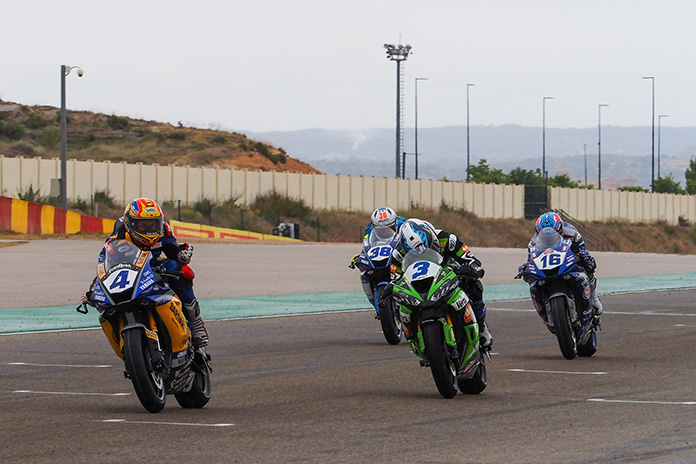 The second WorldSSP race of the season was unpredictable, wild and full of drama and battles.

Tyre gambles were the order of the day as Steven Odendaal (Evan Bros. WorldSSP Yamaha Team) claimed a stunning FIM Supersport World Championship victory in difficult conditions at MotorLand Aragon for the Pirelli Aragon, while Jules Cluzel (GMT94 Yamaha) fought from last on the grid to claim a podium.

The drama kicked off before the race had started with Cluzel losing his pole position due to a tyre pressure infringement, meaning the Frenchman had to start from last of the 25-strong grid. This gave both Philipp Oettl (Kawasaki Puccetti Racing) and Odendaal a clean run at the start, although Oettl was unable to convert this into a strong result after coming off his bike at Turn 2 on Lap 1, being joined in the gravel by Federico Caricasulo (GMT94 Yamaha) in separate incidents. Both were able to remount although Oettl retired from the race while Caricasulo finished in 18th place.

This allowed Swede Christoffer Bergman (Wojick Racing Team) to take the lead of the race ahead of rookie Marc Alcoba (Yamaha MS Racing), with Bergman becoming the first Swedish rider to lead a race in WorldSSP. However, the race was defined by tyre selections with both Bergman and Alcoba on full rain tyres, falling down the order and finishing in sixth and seventh.

Cluzel’s race was compromised from the start with the tyre pressure infringement forcing him to start at the back of the grid, although he made light work of moving up the grid. The French rider had moved up to tenth in the early stages of the race and claimed the lead of the race with a handful of laps to go; his moves through the field including a double pass at Turn 1 to move up into fourth place on Vertti Takala (Kallio Racing) and Manuel Gonzalez (Yamaha ParkinGo Team).

It had looked like the Frenchman would bounce back from yesterday’s disappointment, after being taken out from the lead of the race, but he was reeled in by Odendaal and De Rosa with just a few laps of the race left.

The battle for the win ended with a four-way scrap between Odendaal, De Rosa, Cluzel and Soomer with less than four tenths separating the four riders. De Rosa led on the final lap of the 15-lap race, aiming for his first ever win in WorldSSP, but lost out to Odendaal on the run to the final corner with the South African rider moving to the inside of the double left-hander to claim the lead of the race, with De Rosa unable to get the run out of the final corner to take victory; Odendaal making it two from two at MotorLand Aragon. Cluzel came home in third place despite starting at the back of the grid, holding off Soomer by 0.055s at the chequered flag.

Niki Tuuli (MV Agusta Corse Clienti) did not start Race 2 after he was declared unfit following yesterday with a concussion; an incident for which he has been penalised with a pit lane start for the next race he participates in. Thomas Gradinger (DK Motorsport) was also declared unfit with a left foot contusion following a crash in Sunday’s Warm-Up session. After yesterday’s strong showing, Luca Bernardi (CM Racing) had a technical issue in the early stages of Race 2 as he ran in the top five until the issue that forced him to retire.

“To be honest, it came as a huge surprise to me. I would’ve been happy on the podium today. The conditions were super difficult today. I’ve never even done a race, or practiced, with the intermediate tyres. The team on the grid said ‘no, we need to take the risk and go with the intermediates’, so I said I trust you guys. A big thanks to them because honestly, if it was my choice, maybe I would’ve gone with the wets.”

“I’m really happy, for me this is incredible. This winter, I had a big injury on my shoulder. For this, I want to say this was a difficult winter. I had an operation. Now I want to say thank you to my team, all the Calero family. The race is incredible, it was difficult trying to understand the conditions. I started too slowly but again, it came better and better throughout the race. I’m really, really happy.”

“To be honest, I was thinking not to fight for the victory, but I was fighting for the victory, so it was a great achievement. I had a moment at the end, it was raining, and it was incredible how fast we can go with the nearly slick tyre. It was something that you can take a lot of risk with to win, but you can also lose a lot. I was in the middle to manage but 16 points is great. It’s a shame that yesterday I lost 25 but the season is long and it’s good to be on the podium now.”

Championship Standings (after Race 2, Round 1)