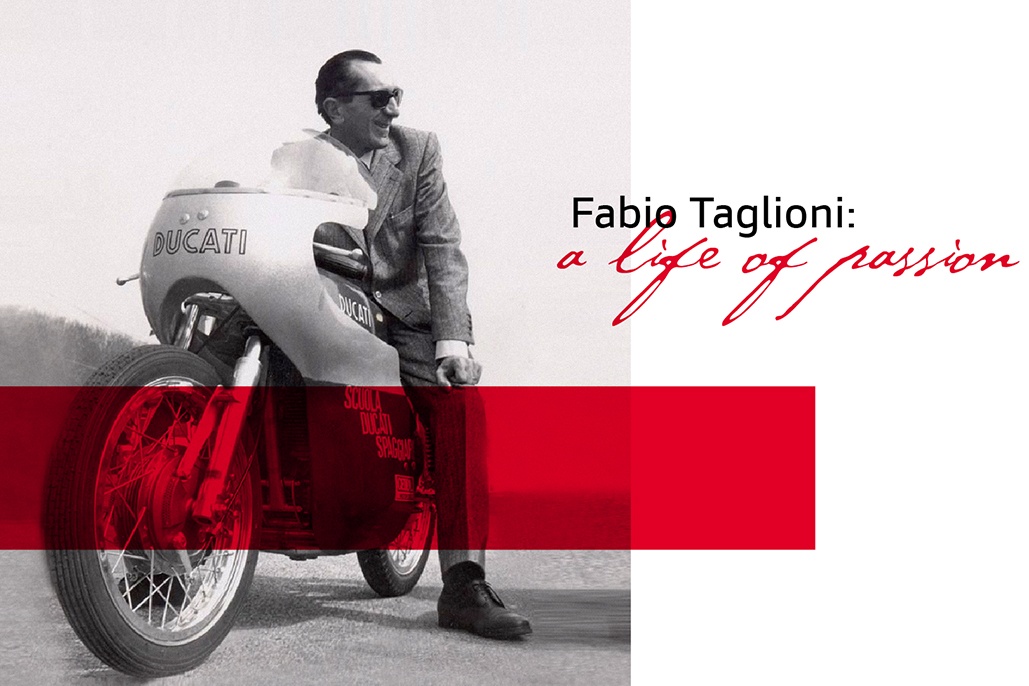 On the day of the 100th anniversary of the birth of Fabio Taglioni, Ducati celebrates and honours the memory of the italian engineer, designer of numerous revolutionary projects. Among these, the application of the desmodromic distribution system stands out, a technology with which Taglioni inextricably linked his name to the success story of the Bologna-based motorcycle manufacturer.

Born in San Lorenzo di Lugo on 10 September 1920, Taglioni graduated in mechanical engineering in 1943 and joined Ducati in the role of Technical Director on 1 May 1954, a date that marks the beginning of a flourishing of projects, ideas and patents that earned a place for the legendary Ducati-Taglioni pairing in the two-wheeled world. Only 40 days after joining Ducati, Taglioni created his first marvel – the Gran Sport 100, also known as ‘Marianna’ – which immediately became a force in Italian Gran Fondo long-distance road races.

In the wake of the successes achieved by the Gran Sport 100 and 125, the engineer from Lugo chose to devote himself fully to racing and to embark on the ambitious project of the desmodromic distribution system. Until then, the ‘desmo’ represented a technical and engineering gamble, but Taglioni demonstrated that he had the tenacity and skills to study it, perfect it and make it a winning idea. The first bike to be equipped with the desmodromic system was the 125 GP Desmo, which won its first Grand Prix a month after its debut and established itself in time as the fastest 125 in the world.

In the following years Taglioni actively participated with his work in the industrial rebirth of Ducati, creating projects such as the 175 Gran Turismo and the birth of the Ducati Scrambler, thus demonstrating a level of engineering excellence that was not limited to speed, but also included reliability and resistance.

After having contributed to making Ducati an international brand, Taglioni went back to devoting himself to new projects and prepare Ducati’s return to racing which took place in 1971 with the 500 GP, and in 1972 with the debut of the 750 GT, the first twin-cylinder production bike in the history of the Bologna-based manufacturer, powered by a 90° longitudinal two-cylinder engine. The 750 Imola (a production derivative of the GT) made its debut in record time at the Imola 200 miles and in front of 85,000 spectators achieved one of the greatest feats in the history of motorcycling, with Paul Smart and Bruno Spaggiari crossing the finish line in front of everyone. Until the end of his career Taglioni continued with innovation and experimentation in the racing field, putting his signature on projects such as the Pantah 500 and 750 F1.

The life and career of engineer Fabio Taglioni were celebrated with an evening entirely dedicated to his memory on Wednesday 9 September in the Pavaglione of Lugo di Romagna, his hometown. The event, sponsored by the municipality of Romagna, saw the participation of Ducati in the figure of the Curator of the Ducati Museum Livio Lodi, who recalled the fundamental stages in the history of collaboration between Taglioni and Ducati. The evening was also attended by the Mayor of the city Davide Ranalli, the Regional Councillor for Tourism Andrea Corsini, the writer Luigi Rivola and many other personalities such as the famous Italian comedian Giuseppe Giacobazzi, who recounted in his personal style the historic feat of the Ducatis and Taglioni at the Imola 200 miles in 1972.

The mini-series ‘Fabio Taglioni – A Life of Passion’ is currently being broadcast on the Ducati website and YouTube channel. The episodes tell the story of the engineer from Romagna, accompanied by exclusive images and videos.