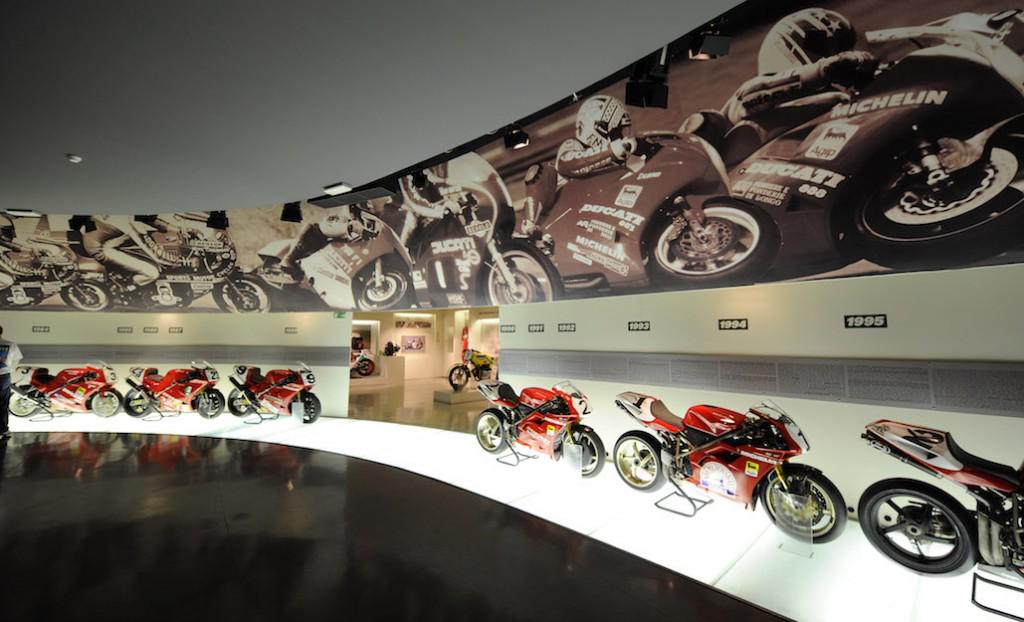 For the fourth year running the Ducati Museum has been awarded the TripAdvisor Certificate of Excellence, a prestigious acknowledgment given to tourist facilities and attractions that are consistently given excellent reviews on the world’s largest travel website. The TripAdvisor Award reflects the high satisfaction ratings posted by the constant stream of visitors to the Ducati Museum which, in 2014 alone, attracted over 40,000 people from all over the world. TripAdvisor contributors gave the Ducati Museum a score (4.5 out of 5) that almost reached the website maximum.

To select the winners of the Certificate of Excellence, TripAdvisor uses a special algorithm that takes into account a range of factors such as the quality, quantity and relevance of the reviews. It also considers the opinions posted by travellers over the last 12 months, the position of the attraction in the site’s popularity rankings and how long it has been in those rankings.

The Ducati Museum, actually located inside the motorcycle production plant, takes visitors into the past, letting them discover the origins of Ducati and admire the bikes that have written international motorcycling history. Inaugurated in 1998, the Museum covers an area of about 850 square metres and offers a unique insight into over half a century of motorcycle racing. The Museum showcases the very best ever built by Ducati: from the products of the pre-motorcycle era and the famous 1946 Cucciolo, to the Desmosedici GP that won the World Motorcycling Championship. This history journey passes through seven different theme-based multimedia rooms organised by Livio Lodi, the museum’s curator; here, the bikes live on with the thrills they once generated, thanks to vintage footage, accessories and curios, being able to recreate the entire Ducati saga. The Museum is thus a perfect representation of the Bologna-based motorcycle manufacturer’s unique history, which has combined technological innovation and design with exceptional sports performance.

The Ducati Museum can also be visited virtually on Google Maps: here, thanks to high definition images, it’s possible to enter the Red Passion Temple by following the famous Cavalieri Ducati street that takes you to the company and then exploring, right down to the last detail, the rooms and the displayed bikes. A fantastic opportunity to experience Ducati from anywhere in the world, anytime.

In 2012 the Ministry of Cultural Heritage and Activities (Regional Supervisor of Cultural and Landscape Heritage of Emilia Romagna) declared the Ducati Museum, together with the motorcycle manufacturer’s archives, to be of outstanding historical and cultural importance, so much so that they are on the official archival heritage listings.

Ducati Motor Holding S.p.A. – A Sole Shareholder Company – A Company subject to the Management and Coordination activities of AUDI AG

Founded in 1926, Ducati has been producing sport-inspired motorcycles since 1946. Today, their motorcycles are characterized by performance engines with Desmodromic valve actuation, innovative design and avant-garde technology. Covering several market segments, Ducati’s range of motorcycles is divided into model families which include: Diavel, Hypermotard, Monster, Multistrada, Streetfighter, and Superbike. In 2015 Ducati presents the Ducati Scrambler: not just a new motorcycle but rather a new brand, offering a whole new world made up of bikes, accessories and apparel that provide the last word in self-expression.

These authentic icons of “made in Italy”, together with an extensive range of associated accessories and technical and lifestyle apparel, are distributed in 90 countries around the world, with concentration on the European, North American and Asia-Pacific markets. In addition to the Bologna factory located in the Borgo Panigale area, Ducati has a plant in Thailand, which opened in 2011 and assembles motorcycles for the Asian market, and, since 2012, another in Brazil that assembles motorcycles for South America. In 2014 Ducati delivered 45,100 motorcycles to customers, an all-time company record.