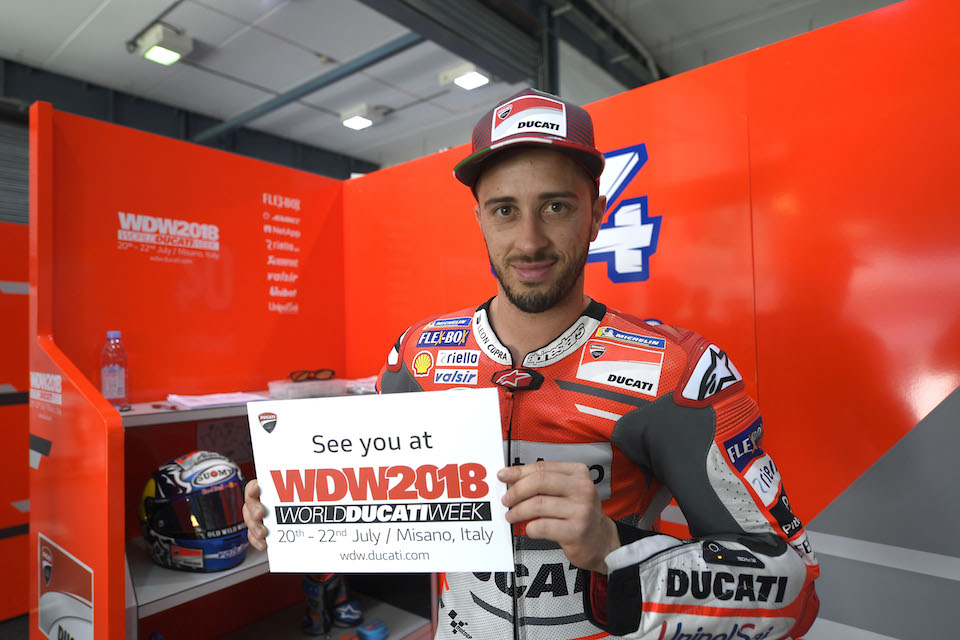 The countdown to World Ducati Week 2018 has begun. The biggest international Ducati gathering, held from 20 to 22 July, will attract thousands of Ducatisti and passionate motorcyclists from all over the world who are ready for the peaceful invasion of the Adriatic Coast and of the Misano World Circuit “Marco Simoncelli”.

Preparations for this exciting and unique event are in full swing, and Ducati riders have already confirmed their presence. They are ready meet their fans in person and share with them their passion on the track and in the paddock of the Misano circuit, but also during the many activities planned for the WDW2018 in various locations of the Riviera Romagnola.

Andrea Dovizioso and Jorge Lorenzo were among the first to confirm their attendance. The two Ducati MotoGP Team official riders are only two of a rich list of champions that makes the WDW2018 even more exciting. There will be a lot of motorcycling celebrities from the past, including names such as Casey Stoner, Troy Bayliss and Carlos Checa, who have won important championship titles in MotoGP and SBK with Ducati. Michele Pirro is also attending, who is the official Ducati test rider and now also undisputed leader of the CIV (Italian Speed Championship).

A fundamental role will also be played by the riders of the Aruba.it Racing – Ducati Team, Chaz Davies and Marco Melandri, who are currently competing in the Superbike championship. Together with them is Michael Ruben Rinaldi, the new entry of the team, and Superstock 1000 Champion with Ducati in 2017.

The Alma Pramac Racing Team will be at WDW with Danilo Petrucci and Jack Miller, as well as other private riders such as Tito Rabat, Xavier Simeon, Alvaro Bautista and Karel Abraham for MotoGP, Xavi Fores and Lorenzo Zanetti for SBK.

Riders will be involved in many on track activities like races, interviews, special initiatives, interacting with fans, giving autographs and taking selfies with as many as possible of the thousands of participants who will crowd the Misano World Circuit during the three days of WDW2018.

To secure your spot at WDW2018 you can purchase your ticket in different ways, go to wdw.ducati.com for all the details. To stay up to date with all the latest news before and during the event, the new official WDW App for World Ducati Week 2018 is available for download free of charge from the Apple Store and Play Store.