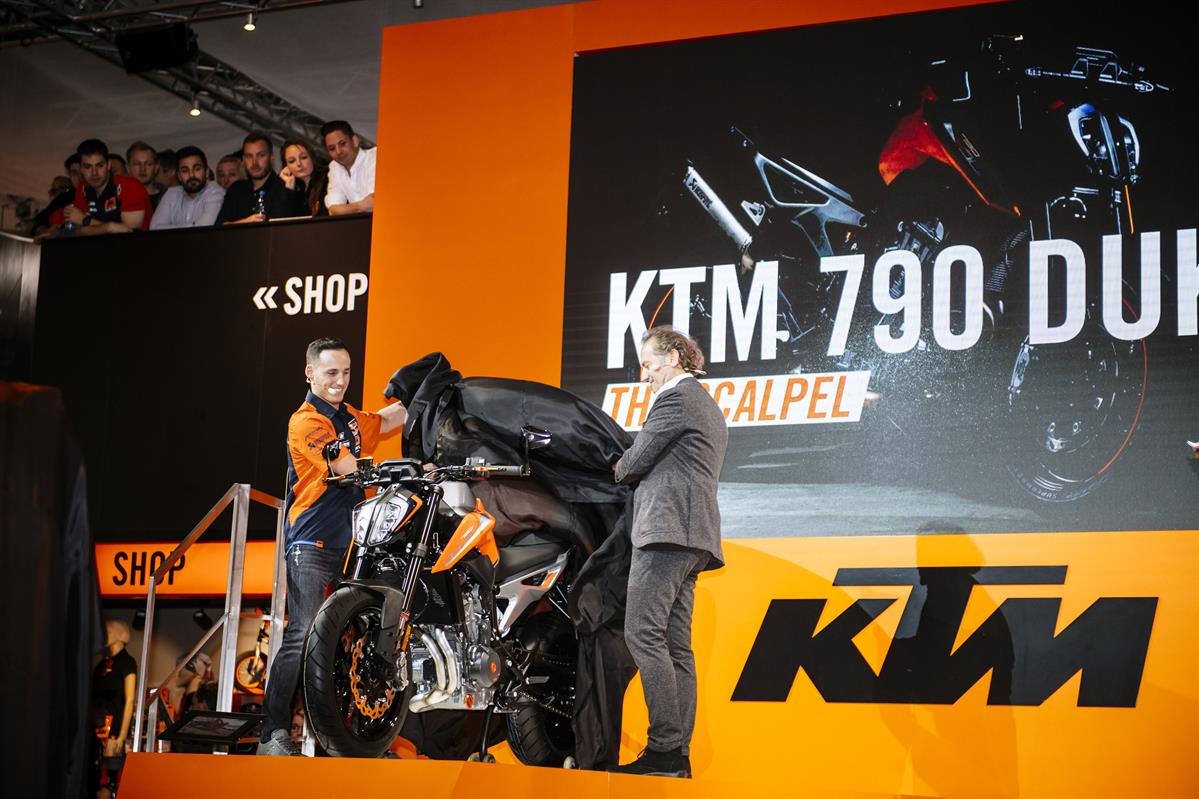 KTM pulled the covers off its all-new, production ready KTM 790 DUKE at EICMA, Milan, today (November 7, 2017) along with a KTM 790 ADVENTURE R prototype, hinting how the Austrian firm’s model line-up will further expand, thanks to a completely new engine generation with its 799cc LC8c parallel twin powerplant.

KTM CSO Mr. Hubert Trunkenpolz updated the assembled media and guests on the status of the company, scheduled for another record year of growth and profit in 2017 – underlining its position as the largest European motorcycle manufacturer. With a completely new engine platform, an expanding R&D facility, increased staff globally and now more than 280 World Championships in its trophy cupboard, KTM refuses to shut the throttle on progress.

Last year at the same event, the KTM 790 DUKE prototype – The Scalpel – was unveiled on stage; the exhaust note of its LC8c engine thundering through the halls. This year, KTM returned with the full production version, boasting performance figures and a specification that will blow up the fiercely competitive 600 to 1,000cc naked bike segment.

Formally introduced on stage by Mr. Trunkenpolz, the KTM 790 DUKE punches out 105 hp and 86 Nm of torque from the extremely compact and all-new LC8c parallel twin engine with an unrivaled electronics package. This is a pure KTM – potent and precise, to satisfy the needs of riders who know that power-to-weight ratio and agility can be more important than raw, straight-line brute power. From prototype to production, ‘The Scalpel’ lost none of its edge.

EICMA was also an opportunity for indicating what highly exciting further options to utilize the LC8c parallel twin are looming on the horizon. Just one example: the KTM 790 ADVENTURE R. This is what the ADVENTURE community has been eagerly awaiting; a lightweight, compact midrange travel enduro with outstanding cross-country ability. And that wait is almost over …

The KTM 790 ADVENTURE R prototype fully embraces the Austrian company’s READY TO RACE philosophy. With its high dashboard tower, single seat, tiny LED lights and low-slung fuel tanks, the KTM 790 ADVENTURE R is clearly inspired by the KTM Rally machines that dominate competition the world over. The LC8c punches hard from inside its lightweight and extremely rugged chassis, complete with top-quality WP Suspension components front and rear. Naturally, a production version of this would come with the very best electronic rider assistance package too.

Mr. Trunkenpolz: “We aimed to design the most performance-focused mid-weight travel enduro of its class, with the dynamism of much bigger engine machines, by giving it a leading power-to-weight ratio. The KTM 790 ADVENTURE R prototype is built from a pure offroad obsession. KTM is the market leader in the dirt; our heritage in this field is something no other motorcycle brand can easily copy and this is another exciting indication of the future.”

As a clear example of the relentless push that drives the KTM motorsport division forward and not leaning on past successes, KTM also presented an entirely new generation KTM 450 RALLYin a bid to claim a seventeenth consecutive Rally Dakar victory.

Representing two years of intense development and debuted at the OiLibya Rallye Maroc in October, the bike is faster and lighter while being more agile and stable. Wrapped in new bodywork and housed in a bespoke, freshly developed chassis is a new 450cc single cylinder engine. Controlled by a new engine management system and a revised throttle body, the result is better peak performance and improved throttle response. And in the true KTM style and for non-factory pilots, a customer version KTM 450 RALLY REPLICA will become available during 2018.