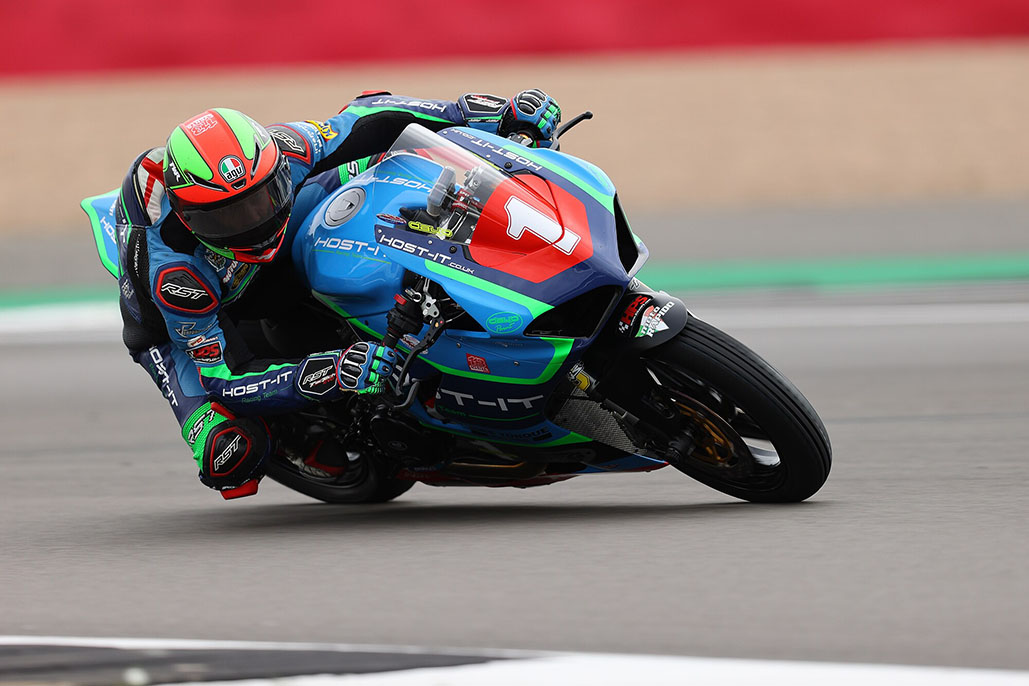 Race 1
Josh Day made an uncommon mistake in Saturday’s Ducati Cup race at the Silverstone National circuit on Saturday after crashing out from the lead. The Host.it.co.uk Racing rider was out at front with CymCirrus Motorsport’s Elliot Pinson from the start of the race.

It looked like it could be business as usual, with Day setting a new lap record on Lap 3 with a time of 56.287s, but disaster struck for the championship leader when he crashed out on Lap 10. This left Pinson out at front with a comfortable gap to take the chequered flag, his second victory of the year following his previous race win at the Donington Park Nationals circuit, with the result moving him up to second in the championship standings.

David Shoubridge (Rich Energy Ducati) who was in pain following a crash yesterday, and Chris Walker (4T2 Racing) had another close race, with Shoubridge making a move in the closing moments to claim second position across the line ahead of the former Superbike star.

Elliot Pinson (CymCirrus Motorsport #75) – 1st
“It’s a big moment in the championship with Josh not finishing and me getting 25 points, I’m really happy with that. I got a really good start, and I was just sitting with Josh and then I saw him go down in front of me. It was pretty easy going from there to be honest because I had a bit of a gap behind me and no one in front of me. Really happy to take home this win and a massive thank you to the team and all of my sponsors and supporters because I wouldn’t be standing on this top step if it wasn’t for you.”

David Shoubridge (Rich Energy Ducati #86) – 2nd
“I had a crash yesterday in qualifying and I thought I got away unscathed; I just tucked the front at Brooklands. It was a real fast one, but I stayed on my back and just as I came into the kitty litter I thought I had got it away with it but the bike came tumbling in and sort of pummelled me in the back. Ribs are a little bit sore. I wasn’t sure if I would be able to ride. But it’s my Dad’s birthday today and he can’t be here so it’s great to pick up another second place and to get on the podium and have a good battle with Chris. I’m absolutely over the moon. Thanks to all my sponsors, cheers to my team for rebuilding my bike. And happy birthday Dad, love you loads.”

Chris Walker (4T2 Racing #9) – 3rd
“It’s been amazing. I feel for Josh who went out that one whilst in the lead, he doesn’t make many mistakes. It was a great little race. There’s a different tyre at Silverstone that we all have to use and it’s the first time I’m on it this weekend, as it will be for a few of them. It makes the bike feel quite different, it’s got more grip. I enjoyed it more because of it, but it wears out. The last few laps I’d not got any grip left so I was a bit smashed when Shouey got me the last couple of laps. To be fair he had a big off yesterday morning, he had some massive pace prior to that, I was expecting it. Chuffed to bits. Another good ride, and another surprise.”

Race 2
The top three in the championship lined up on the front row for Race 2 on Sunday with Josh Day (Host-it.co.uk Racing Team) on pole.
Pinson was quickest off the line with Walker in second, and Day third. Pinson’s lead was not to last as Day moved to the front, immediately setting the pace with fastest laps on lap 2 and 3.

By lap 6, two separate battles had formed with Day and Pinson, and Walker and David Shoubridge and it was set up for a gripping finale. Unfortunately, Sam Cox (Sam Cox Racing) crashed out damaging the barrier and leaving debris across the track. The race was immediately red flagged and the race was set for a restart with a 6-lap dash.

Race 2, part 2 was a carbon copy of the first with Pinson taking the holeshot followed by Day, Walker and Shoubridge. Again, Pinson’s lead was short-lived as Day edged past Pinson as they crossed the line at the end of lap 1. Pinson pushed Day all the way setting the fastest lap of the race as the two crossed the line within 0.06s of each other. Walker and Shoubridge were equally close across the finish line, with Walker again cliaming the final podium position.

Josh Day (Host-it.co.uk Racing Team #1) 1st
“It was good to be back, you always begin to doubt yourself after a crash. I had a real strong pace in the first race and had pulled a 1.3 second lead on Elliot and made a silly mistake trying to extend my lead, when I didn’t need to. We make mistakes don’t we, and it was my first crash in two and half years. Race 2, I pulled half a second on Elliot and then the safety car came out. It was a 6 lap race, and I thought there is no way I am going to beat this kid over 6 laps, as he is awesome off the line. But I dug deep and the last two laps I rode super defensive, but nice to come away with the win. Hopefully we can keep that momentum and you never know I might be lifting that title again.”

Elliot Pinson (CymCirrus Motorsport #75) – 2nd
“As soon a I knew it was going to be a 6 lap start I knew it was going to be absolute madness. So I pushed as hard as I could, and tried to stay on Josh’s back wheel and stay as close a I possibly could. It was working out alright, and then on the last lap I made a little mistake at the second turn and ran in a little bit hot. I managed to get it back, but Josh just beat me on the drag to the line..again! But well done to Josh and thanks to my team and sponsor its been a mega weekend and I wouldn’t be here without you.”

Chris Walker (4T2 Racing #9) – 3rd
I managed to hold on to the front two for longer in the start before the restart and then on the restart I made a bit of a mistake on 2nd lap. Although I did a good lap and got into the 56’s, they were already gone. I didn’t look at my pit board, but I figured Shoubridge be there and if not Neve as well, so I just kept my head down. I had a sneaky look to see how many laps there were to go and came round the last corner and the chequered lap was out. It was a lucky last lap I guess, but nice to beat Shoubridge over the line like he did me yesterday, so well happy.