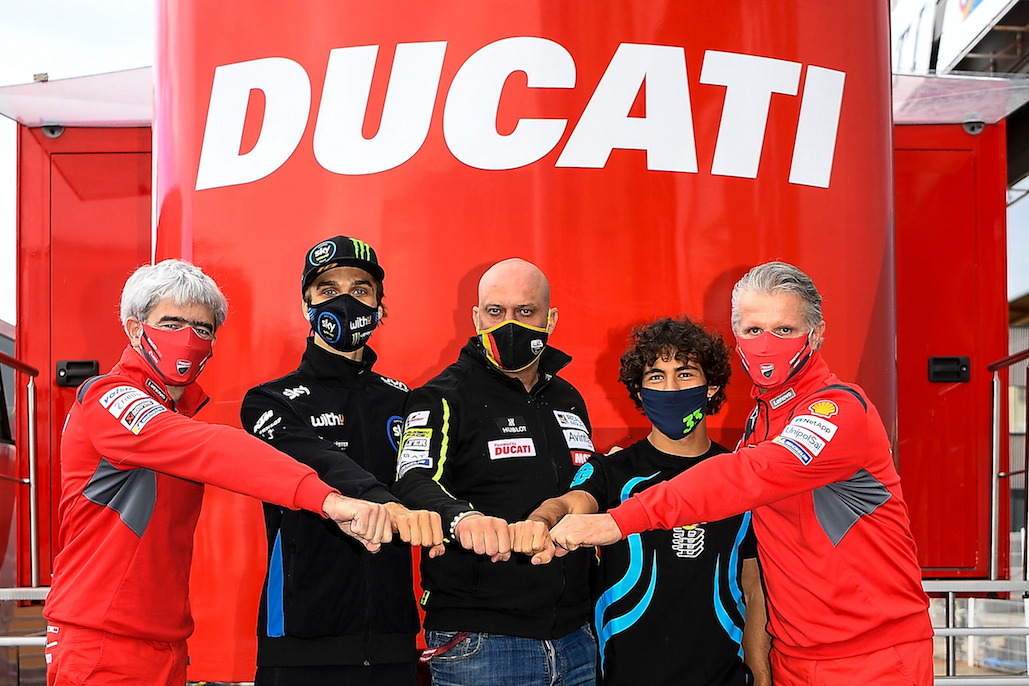 Ducati Corse is pleased to announce that it has reached an agreement with the Esponsorama Racing team and riders Enea Bastianini and Luca Marini, thanks to which the two young Italian riders will make their debut in MotoGP in 2021 with the Ducati Desmosedici GP bikes entrusted to the Andorra team.

Born in Rimini in 1997, Enea Bastianini participated in his first season in Moto3 in 2014 after two victories in the Rookies Cup in 2013. In his debut year in the World Championship, Enea conquered three podiums taking his first victory the following year together with other five podium finishes and ending third in the overall standings his second season in the class. 2016 Moto3 runner-up in the Championship with six additional podiums to his credit, including one victory, the rider from Romagna raced two more seasons in this class picking up several successes. In 2019, Enea stepped up to Moto2 taking his first podium in Brno, Czech Republic. In the current season, in his second year in the intermediate class, Enea has so far scored three wins and seven podiums and is fighting for the title: he occupies the second position in the overall standings, just 7 points behind the championship leader.

Luca Marini, born in Urbino in 1997, joined Moto2 in 2016 after having distinguished himself in Moto3 in the Italian and Spanish Championships. After two seasons of apprenticeship, Luca joined the SKY Racing Team VR46 in 2018, and took his first victory, together with four other podiums and two pole positions. The rider from Marche continued with the same team in Moto2 the following year, adding two more victories and four podiums to his tally. This year Marini has so far achieved three wins and five podiums in total and, with 155 points, occupies the third position in the Championship, just 23 points from the top of the standings.

Luigi Dall’Igna, Ducati Corse General Manager:
“We are very pleased to have reached this agreement thanks to which two young Italian talents will be able to make their debut in MotoGP next year on our Desmosedici GP bikes entrusted to the Esponsorama Racing team. This year Raul Romero’s team has shown that it has reached an excellent level of professionalism. Thanks to the renewed technical support that we will provide to the Andorra team in 2021, we are sure that it will support Enea and Luca in the best possible way in their first rookie season. Both Bastianini and Marini have shown to be highly competitive in Moto2 this year, and we are sure that the time has come for them to move up to MotoGP. We will provide them with all the necessary support to accompany them on their way to the top category. With this decision, Ducati intends to continue with its strategy to enhance the young talents, that has already led Pecco Bagnaia to make his debut in MotoGP with Pramac Racing in 2019 and to reach an important goal for 2021: to wear the colours of the official Ducati team”.

Enea Bastianini:
“Racing in MotoGP is a dream come true for me, and I’m happy to be able to do it with Ducati, of which I’ve been a big fan since the days of my idol Casey Stoner. It will undoubtedly be an important step that will push me to grow a lot, and I would like to move up as the Moto2 World Champion, even if it will not be easy. I want to thank my family for all the support they have given me since I was a child and my manager Carlo Pernat. I would also like to thank Ducati and the Esponsorama Racing team for the trust they have in me: I will try not to disappoint them!

Luca Marini:
“Having this great opportunity to race in MotoGP in 2021 is a dream come true for me, it’s the desire that every rider has had since childhood. In these years with Sky Racing Team VR46 I have accumulated a lot of experience, and thanks to them, I have grown and achieved my first important results. Now we are in a crucial phase of the Moto2 season, and we will continue to work hard to reach our maximum goal, before embarking on this exciting new adventure together with Ducati and the Esponsorama Racing team”.