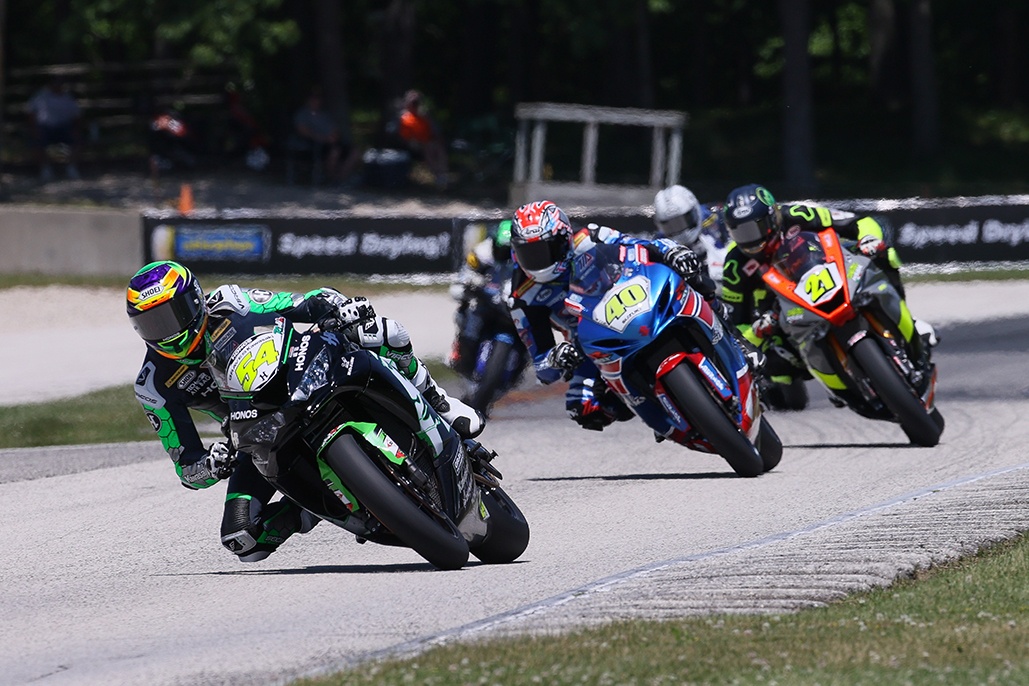 HONOS Kawasaki’s Richie Escalante suffered his first loss of the 2020 MotoAmerica Supersport Series on Saturday at the hands of Sean Dylan Kelly. On Sunday, Escalante wanted no part of Kelly and it showed. He battled early, but once he got into the lead he put the hammer down and disappeared into the distance.

For Escalante it was his fifth win in six races. With Kelly winning on Saturday, Escalante’s points lead was cut from 40 to 35 points. On Sunday, he got that margin back to 40 points as the series heads to Pittsburgh International Race Complex this coming weekend.

Both Corey Alexander and Rocco Landers were able to race to perfect weekends, the New Englander and the Oregonian matching their Saturday wins with wins on Sunday in the Stock 1000 and Liqui Moly Junior Cup classes, respectively.

The three main protagonists from Saturday’s Supersport race one had an encore performance in Sunday’s race two, but this time, the winner was HONOS Kawasaki’s Richie Escalante, who has won five of the six races thus far in the season. Saturday’s winner Sean Dylan Kelly crossed the finish line second on Sunday aboard his M4 ECSTAR Suzuki, and Celtic HSBK Racing Yamaha’s Brandon Paasch was again third.

Also similar to yesterday, the race was a battle in the early laps, with Escalante, Kelly, and Paasch tightly bunched together and going two- and sometimes three-wide into the corners. Each one of the trio led the race at various points, but as the laps wound down, Escalante solidly asserted himself at the front and took the checkers with a gap of more than six seconds. Kelly also stretched his advantage over third-placed Paasch and had a gap of more than seven seconds at the finish line.

“Today, my start was a little bit better but still finished in the first corner in third,” said Escalante. “I’m surprised we ran in the first laps really fast. I take a little bit gap so I said, ‘maybe I go.’ I tried to do my best, then Sean (Kelly) passed me on the brakes. He’s very, very hard right now in the braking. Then I concentrate. I need to pass very quickly when the tires are new. I tried to pass and then had very consistent rhythm. I’m a little bit surprised with my rhythm today. But I’m really happy for my team. HONOS Graves Kawasaki were working yesterday to give me a very good bike today. I’m really happy and ready for Pittsburgh in four days.”

The beginning of the race looked like it would be dominated by Altus Motorsports Tucker Hagerty rider Cameron Petersen, but as was the case in Saturday’s race one, a technical issue took Petersen out of first place and eventually out of the race altogether, even though he did rejoin to ultimately finish 18th and two laps down.

“Obviously, every weekend you come into you want to win,” Alexander said. “That’s why we do this. If we didn’t think we could win, we wouldn’t be here. I didn’t expect to have it go this well, though. We made a lot of changes between Road America and this round to just make the bike work a little bit better for me. I have to give a special shout out to Evol Technologies. They sent me a set of rearsets because we were struggling with some shifting issues and ultimately that made a big difference for us. So, thanks to Steve from Evol for sending those to us. Honestly, that was probably the biggest thing. You can imagine how difficult it is when you’re coming off of a 170-mile an hour straightaway and not really sure if you’re in the right gear. So having that out of my mind kind of just let me focus on chassis stuff and making the bike better. Going into today’s race, I was talking to our riding coach Jason Pridmore about just kind of the pressure I was putting on myself because I really wanted to go out and do it again. I felt like yesterday was good, but I know Cam (Petersen) had that brake issue. I just wanted to beat him straight up. I’m not sure what happened to him. It’s a bummer for sure. I thought we were going to have a tough race today with him. Hats off to Alex (Dumas). It’s really cool. We’ve been riding together since he was really young, so to see him up here with me is a little surreal. It makes me feel old. Kind of probably like Geoff (May). It’s funny how it works. Hats off to these guys, especially Geoff, as well. It’s crazy in this heat and to be able to maintain this level for so long over such a long career. Hopefully we’ll see him in some more races. Otherwise, I want to say hello to my Uncle Richie (Alexander). Wish he could be here. Thanks to all of our team, Graves Motorsports, Iconic Motorbike Auctions, Maxima Racing Oils, Arai Helmets, Tucker, Alpinestars, everybody. I do everything myself. Just like Jeff said, I work. I don’t do mortgages, but I do bike loans all week. Finance. So, we’re selling a lot of Kawasaki’s back home, and it’s great for our industry and for the dealership back home, Hudson Valley Motorcycles. Overall, just got to be happy. Thanks everybody. Thanks to MotoAmerica. Thanks to all the fans for watching and coming out and having a good weekend. I hope everyone is staying safe.”

Landers got the holeshot in Sunday’s race and made a statement from the get-go. The defending class champion was never headed. Doyle and Lochoff, both from South Africa, traded spots a couple of times during the 11-lap contest, but the finishing order settled out as the laps wound down.

When asked about leading from start to finish, Landers said: “I was going to try to put my head down and try to get a good gap. When I looked back on the second lap, I had a little gap over Sam, but I saw Dom was right behind him. I was like, ‘Okay. He’s there. I’m going to have to try to get my head down.’ Then a couple laps later he was back again, and I saw that Dom was actually right in front of Sam and they were closing on me. At that point I was trying to settle some mid-41 lap times just to not run too many risks but actually still doing fast lap times. Then I saw that Sam passed Dom. Then I was like, they’re battling. I might be able to consistently run this pace and stay in front. Then I saw that Dominic got back past him, and he was closing back on me. So, I tried to put my head down and put in some consistent low 41s, high 40s. Tried to stretch out the lead, and it worked out pretty good. Really, I couldn’t ask for a better weekend with how I’ve been feeling. I’m pretty stoked on this weekend.”

Back on track: WorldSSP battles to resume at Jerez