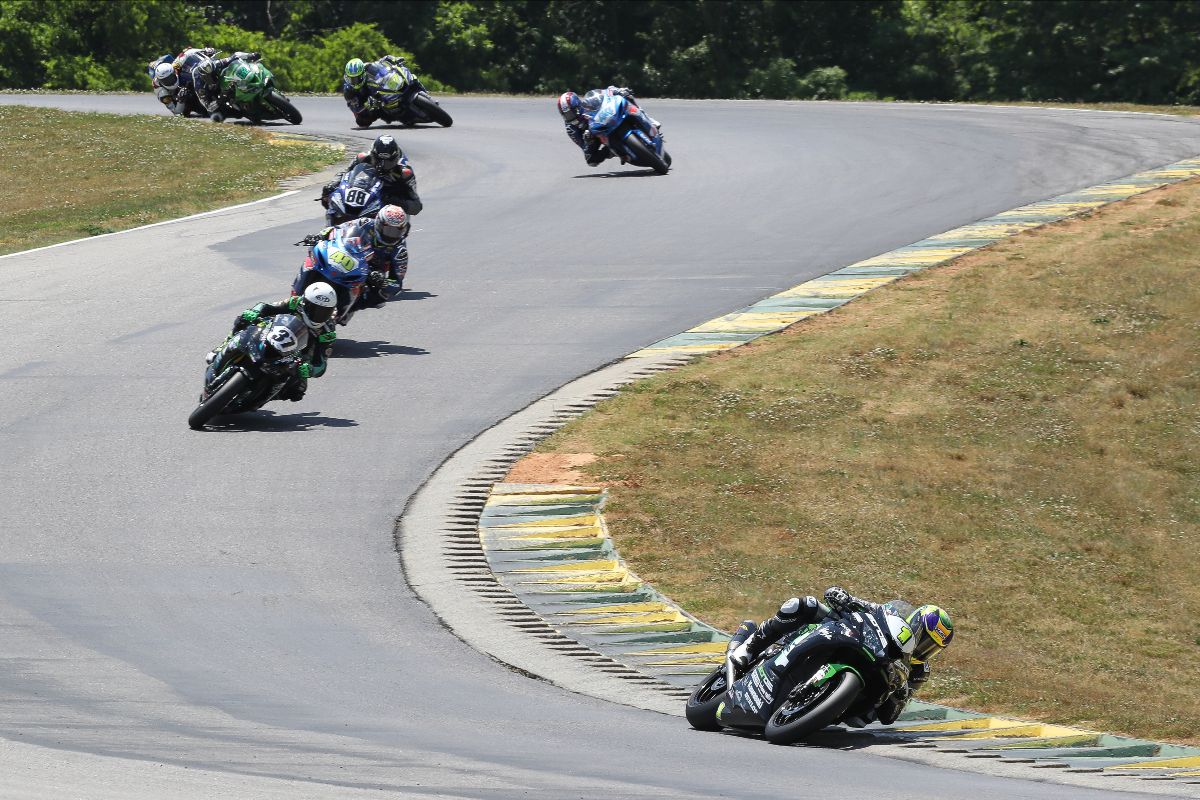 As Richie Escalante said from Parc Ferme after winning Sunday’s second of two MotoAmerica Supersport races at VIRginia International Raceway, “Richie is back.”

Two weeks removed from having his collarbone plated, Escalante won his first Supersport race of the season on Sunday and not a minute too soon as his championship rival Sean Dylan Kelly had won three straight races to begin the 2021 season.

Escalante wasn’t the only championship hopeful to return to the top step of the podium at VIR as Corey Alexander went out and won his first Stock 1000 race of the season after a rocky start to his campaign.

As for the SportbikeTrackGear.com Junior Cup and Twins Cup races at VIR, it was a case of a pair of first-time class winners in Cody Wyman and Jody Barry.

On the occasion of his 27th birthday, HONOS HVMC Kawasaki rider Corey Alexander gave himself a priceless, hard-fought gift when he won Sunday’s Stock 1000 race two at VIRginia International Raceway.

Saturday’s race one winner Jake Lewis almost spoiled Alexander’s rolling birthday party when he very nearly overtook Alexander on the final lap, but Alexander maintained his position at the front and kept Lewis and his Altus Motorsports Suzuki behind him, taking the checkers by .047 of a second over the Kentuckian. With Lewis in second, third place went to Michael Gilbert Racing Kawasaki’s Michael Gilbert, who was just under a second behind Lewis.

“It was fun riding with these guys up front,” Alexander said. “You can kind of depend on them to at least give you a little bit of space. There wasn’t much there, but I knew (Lewis) wasn’t just going to punt me. So, I was holding on tight a little bit, and I knew I was dragging him out to the grass and the only way I could really get the bike off of him was to accelerate. Fortunately, I kind of fell forward a little bit. But otherwise, we went back and watched the race last night and kind of saw some spots where he was better than me. I don’t know if I really improved in them, but I knew that I couldn’t let him by me in those spots, so I kind of tightened up my lines a little bit. The guys made a couple changes to allow me to brake better, which was kind of my strong suit I think today. I utilized that to make sure that I could lead the race. I learned yesterday from Jake that catching those backmarkers and kind of keeping your race under a lead and get through them smoothly, that will put you in a position to win. So that’s all I really cared about. As soon as Geoff (May) got by me, I needed to get back by him. Same thing with Jake. I knew I had to pass everybody on the brakes. Can’t ask for a better birthday.”

Supersport: The Return Of Richie

Defending MotoAmerica Supersport Champion Richie Escalante’s title defense got off to a bit of a rocky start. The HONOS Kawasaki rider did finish second in both races at Michelin Raceway Road Atlanta, but then, right after that round, he fractured his collarbone in a training accident on his bicycle. Despite the setback, Escalante not only raced at VIR, but he put in a dominant performance in Sunday’s race, winning by more than seven-and-a-half seconds over M4 ECSTAR Suzuki’s Sean Dylan Kelly, who has been unstoppable up to this point.

Kelly did finish second, but he was clearly not happy with the result and felt like the changes they made to the bike overnight after Saturday’s race did not improve the bike. Mesa37 Racing Kawasaki’s Stefano Mesa, himself also dealing with some bumps and bruises, toughed it out and finished third albeit a little more than 11 seconds behind Kelly.

“I’m so happy,” Escalante said. “I think yesterday my confidence changed for today. Just as I start the race, I was feeling maybe don’t think it’s a race. Maybe very long the first group. Today I feel great. I woke up more motivated, more relaxed. I feel great in my collarbone. So, I’m so happy. My Honos Racing team is working amazing giving me my bike. My feeling is the same as last year. So, really happy. I’m pushing hard and I passed Sean and then I just waited for pass me again. I tried my best in the first laps. So hard in the last five laps I had to ride the bike not looking at the people waiting for finish the race. I’m so happy. Thanks to all my sponsors and people supporting me. I’m ready for the next round. It’s one of my favorite tracks, so let’s go.”

Former KTM RC Cup competitor Jody Barry has returned to the MotoAmerica paddock after a few years away, and the Righteous Racing Aprilia rider is making quite a name for himself in his return. After reaching the podium at Road Atlanta a couple of weeks ago, Barry got a breakthrough win in Sunday’s Twins Cup race two at VIR. He overtook Jackson Blackmon Yamaha rider Jackson Blackmon on the final lap of the 10-lap event and held onto the lead to win by just .166 of a second over second-place Blackmon. Robem Engineering Aprilia’s Kaleb De Keyrel finished third, just under half-a-second behind Blackmon.

“I definitely figured I had to put the move on early because (Blackmon’s) Yamaha is no slouch in the straightaway,” Barry said. “I was praying to everything out there that I could put enough of a gap on him that he didn’t pass me. It really is just awesome.”

In Sunday’s SportbikeTrackGear.com race two, Kermoto/Madden Painting Kawasaki rider Cody Wyman finally got the breakthrough MotoAmerica win that has eluded him for a couple of years. The youngest of the racing Wyman brothers, Cody has become a master of the draft pass, and he used it to perfection on the final lap to escape the gaggle of riders at the front and put himself in perfect position to take the checkered flag first. Wyman nipped second-place finisher Ben Gloddy, who was aboard a Landers Racing Kawasaki, by just .049 of a second. Gloddy won Saturday’s race one and appeared to be headed for the double win until Wyman swooped in and grabbed the victory. Also among the lead group was Veloce Racing Kawasaki’s Maxwell Toth, the California rider taking third just .113 of a second behind Gloddy.

“I’ve got to thank team Westby for taking a chance on me a couple years ago,” Wyman said. “To get on a competitive bike and get more comfortable, this is really just the momentum to keep this rolling for the rest of the year. I thought I blew it on the last lap when I got really loose through the esses. Really pushed the braking zones harder than I ever had, and I was driving my life out of the last corner. Lucky that start/finish line is pretty far down there, because I sure needed that. This is great to get my first win and match my brothers’ wins. For all three of us to get a win… it means a lot for the family.”