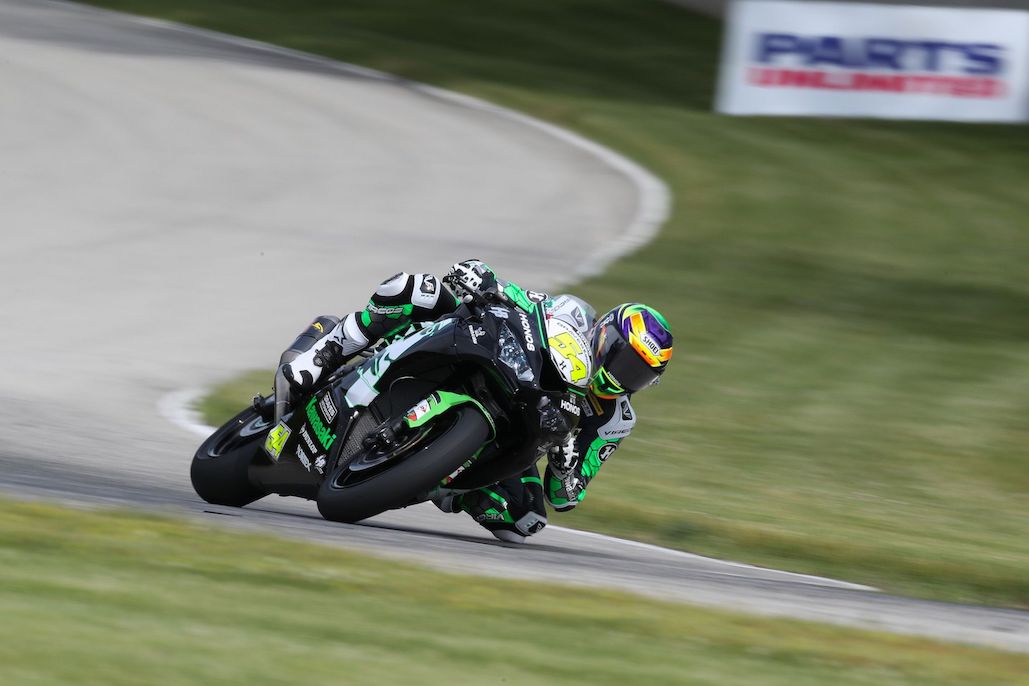 In what thus far has been a repeat of the 2020 MotoAmerica Series opener at Road America at the end of May, HONOS Racing’s Richie Escalante and BARTCON Racing’s Dominic Doyle repeated their victories from round one with the duo winning their third in a row in the Supersport and Liqui Moly Junior Cup classes, respectively.

In Saturday’s Liqui Moly Junior Cup race, South African Doyle started from the pole aboard his BARTCON Racing Kawasaki, while defending class champion Rocco Landers slotted in behind Doyle. Landers, aboard the Landers Racing Kawasaki, was in hot pursuit of Doyle throughout the entirety of the seven-lap race. While Doyle maintained his ultra-narrow gap at the front, Landers stalked and planned his move. It all came down to the final run up the hill to the checkers on the final lap. Landers pulled out of the draft, and made his move on Doyle, but he wasn’t able to nip Doyle at the line.

The margin of victory was .006 of a second for Doyle. A little further back, Quarterley Racing/On Track Development’s Ben Gloddy rode a quiet race, but the New Hampshirite did what he needed to in order to secure third place on the day.

When asked about Landers’ strategy to draft past him to the finish line, Doyle said, “I could feel him coming by, and I definitely thought he had me. I kept it pinned all the way to the line. I kept the lead, somehow. I’m just happy I could hang on for the win.”

The final race on Saturday was the Supersport class, and the 11-lap event was red-flagged when Altus Motorsports rider Kevin Olmedo crashed out of the race on the opening lap. After the nine-lap restart, polesitter Sean Dylan Kelly repeated his holeshot from the first start on his M4 ECSTAR Suzuki and took the lead again. HONOS Kawasaki rider Escalante was in second place and went to work figuring out a way to pass Kelly for the race lead. In a classic display of patience and racecraft, Escalante was able to get around Kelly and move into the lead where he steadily built his margin and took the checkered flag by 3.676 seconds over Kelly in second. Third place went to Celtic HSBK Racing Yamaha rider Brandon Paasch.

Escalante, who is three for three in Supersport race wins so far this season said, “After Road America 1, I tried to take the decision to try different things on the bike. Some working, some not. So, I’m working with a completely different bike all weekend. I need to adapt to race again my riding style to this setting. I’m happy. For sure, the ZX-6R is a really good bike, but I have big moments, two or three during the race. But I’m really happy. I think these guys for sure are coming. So, I need to improve a little bit, especially to exit. Really happy. The HONOS Racing Kawasaki working really good in the bike, my crew. I’m really happy.”