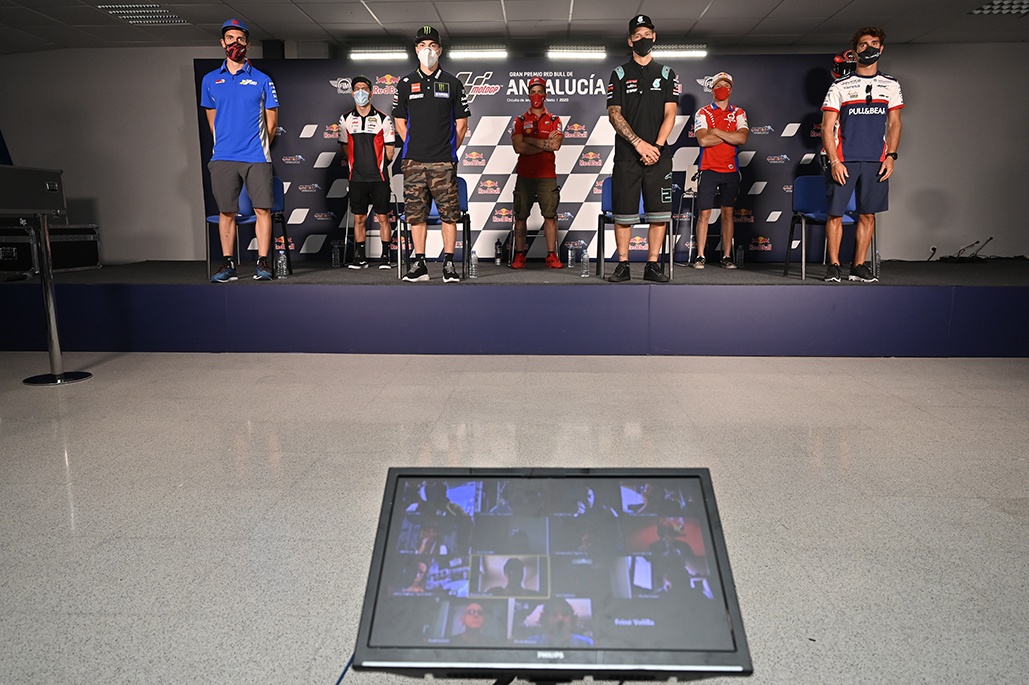 The Pre-Event Press Conference gears us up for this weekend’s Gran Premio Red Bull de Andalucia – with plenty of talking points.

“It was an amazing feeling. I didn’t really feel the pressure of winning my first race but as soon as I won I felt like I’d taken some pressure off me. This is really positive but in the end the first thing that I did after the photos and everything was to have a briefing with my team to try to improve even more, try to find some small details to make even more of a difference and we’ll try to do our best again this weekend!”

“It was quite physical at the end with the hot conditions. In the end it was more than seven months since we had a race in Valencia, and the first one is always tougher. So the second one we should be getting a bit more used to it but, as you said, it will be tough again.”

And what about his fellow riders returning to the fray so soon? And Marquez’ comeback?

“It’s not only about Marc; Alex and Cal are back. Cal also had surgery two days ago, so it’s quite amazing when you’re a rider, you want to come back as soon as possible. Surely they’ll give their maximum with the pain they have and I’m happy for them to be back on track.”

Next to speak was Maverick Viñales, who was first asked about his tyre choice on Sunday…

“It looks like I need to work on the hard! But anyway it’s a totally different race. We needed to focus on the start of the race to be with Marc, somehow we made a good strategy and even if I struggled a lot we took 20 points, which is really good for us. For sure this weekend we have another race in Jerez to try understand the bike. I’m really excited, the feeling is the same as the first race, I feel ready, the atmosphere inside the team is fantastic and I cant wait for us to start!

“Here in Jerez most of the riders have a lot of experience, all the manufactures have many laps and we came from a test. Everyone is fast here. That’s why it was important to start in the first places, pushing and trying to make a gap at the beginning because in the last laps there are many riders that can go fast. There are many manufactures that can win the race but still we need to improve and be ready for this second race.”

One of those many manufacturers hoping to take to the top step is Ducati. Dovizioso, who took his first premier class podium at Jerez last weekend, was next to talk.

“It was really hard last weekend, especially in the race. I was struggling and I couldn’t write the way I wanted. It was very physical for me. From the beginning to the end. To finish on the podium was very important for the championship, being in Jerez. I’m happy to be here again because after four days you’re able to work on some details, after you do the race, and that is the best way to work on the bike. We analysed a lot of things, we have a lot of ideas, let’s see if that will work because it’s what we need; to make a step on our speed, so let’s focus on that.

“About the future, nothing’s changed. Now we’re focused on racing because after that good result on Sunday, we have to keep the position we did on Sunday. It will be very hard because a lot of riders were really fast behind me, so we have to make a step. That’s the point and after that we can think about strategy and all the other stuff, but I’m really interested to try a new setup tomorrow.”

The man Dovizioso just beat to the podium on Sunday, Jack Miller, took to the mic just after, and he echoed how difficult that first time out had been – and revealed what he’ll be working on.

“Yeah, the race was as to be expected. Like the boys said, seven months off we all knew it was going to be tough. Struggles with feeling on the hand, I think it was more to do with position on the handlebar. Here is a lot of right-hand corners where you’re hanging out the side. I lost a bit of motion in my wrist towards the end of the race, I wasn’t able to be as smooth and I let a few blokes past. I mean, the beauty as they said is to be back here again, take two. My body was a bit stiff on Monday but had a few days to recover and try to work on what we struggled on last weekend, which seemed to be the last sector, and try again on Sunday.

“Ducati haven’t been that strong here in the past, I haven’t, all things honest. But things felt good in the test on Wednesday, we immediately felt a good connection. The GP20 is working really well, it’s down to my style to sort out the last sector, which was the biggest issue, if we can do that I think we can challenge. The boys up here who followed me for a few laps will tell you I was pretty much a roadblock through that second to last corner. So hopefully we can sort that out and it will be all systems go.”

Next we heard from Crutchlow, who missed the race last time out and is coming back from surgery to fix a broken scaphoid performed just two days ago. The Brit started with a debrief before looking ahead to this weekend.

“It’s always strange watching a race in your motorhome. I enjoyed it. Congratulations to Fabio, he rode great to have his first race win in MotoGP. I obviously crashed in the morning Warm Up, and it seems that everyone that crashed and went in the gravel quite fast broke bones; me, Marc and Alex. It seems that with the depth of the gravel we were tumbling quite a lot. At the time I went for CT scans on my head because I had quite a lot of bruising on my face and forehead, so I went for CT scans, they were clear and I was quite keen to race, but the doctors at the circuit took the decision that I wasn’t able to race, they wanted to wait 8 hours for the bruising to go down, which meant I couldn’t race. Then, as the painkillers wore off in the day, my wrist started to hurt.

“I didn’t feel it at the time and I felt it was a big problem. We had it examined here with an x-ray then with a CT scan back at the hospital again which confirmed I had a broken scaphoid, so I flew back to Barcelona and Dr Mir performed the operation on Tuesday to put a screw in to the scaphoid, which I believes makes it the strongest now because I can ride with it. It seems not too bad now. Let’s see how it is and if I can ride with it tomorrow. It won’t be easy to ride injured but the professionals that we are, riding injured – with Alex and Marc – we all know the decision taken either by ourselves with the medical team if we’ll be able to cope riding the bike. You don’t know until you get on the bike. We’ve all passed the fitness test but riding these bikes is a different story. I’ll see how it goes and I look forward to getting on the bike in the morning.

“Everywhere will be difficult. The scaphoid, as we know, is one of the worst bones in the body to break, especially if you’re trying to ride one of these bikes around Jerez. It’s really finicky and in such a small space, so it’ll be really painful in the braking zones for sure. I’ll let you know tomorrow evening!”

Next up was Alex Rins, another coming back from injury, after he dislocated his shoulder and suffered a small fracture in the Spanish GP.

“I’m so happy to be here. Saturday was a really bad crash, it’s a crash you don’t want to have. I lost the front at Turn 11 very early. To avoid Jack I tried to save the front tyre and I entered so fast into the gravel, and as Cal said the gravel here is so deep. I lost the rear, I jumped from the bike and I touched the gravel with the shoulder and it immediately came out, I broke a small piece too. Anyway I tried to recover all I can with the physiotherapist at the track. I decided to stay here to try and recover, to see my team and my bike, and to watch the race from our box – for sure it was strange. We passed the exam but let’s see tomorrow on the bike, I’m not at 100% and will feel pain but this is racing. For sure if I feel a lot of pain and I’m not secure to ride, I will stop!

“Especially after FP4, we did a very good lap time and race pace. After the crash I said let’s prepare the bike because I will race but the next day I was in bed with a lot of pain. Watching the race, it was unbelievable. Congrats to these guys because they did a great race with extreme conditions. If I could be there with my pace? We don’t know for sure. Let’s see….”

Finally, the man unbeaten so far in Moto3™ took to the stage. Albert Arenas has 50 points from 50 so far and is on quite a roll, so can anyone beat him this weekend?

“I was really happy after the victory because after four months you ride here with some expectations… ‘can I ride as fast as in Qatar? Let’s see what happens… you’re the leader and you have to manage this’. We did a great job day by day and I feel the same feeling as Qatar and we did a good job with the team. Finishing the race first, again, was incredible.

“Now I feel more experience and confidence but that was building from the last years, especially last year I had an injury at the beginning and I couldn’t have the season that I liked but I learned a lot from those races and that situation and now I am who I am because of that situation. I want to take advantage of all this that I’ve learned, keep learning, keep growing and one day be with these guys.”

Arenas and Moto3™ head out for FP1 at 9:00 (GMT +2) on Friday, before MotoGP™ gear up from 9:55. What will the future bring for those on the comeback? How will they fare once the green light goes on at the end of pitlane? We’ll find out soon…