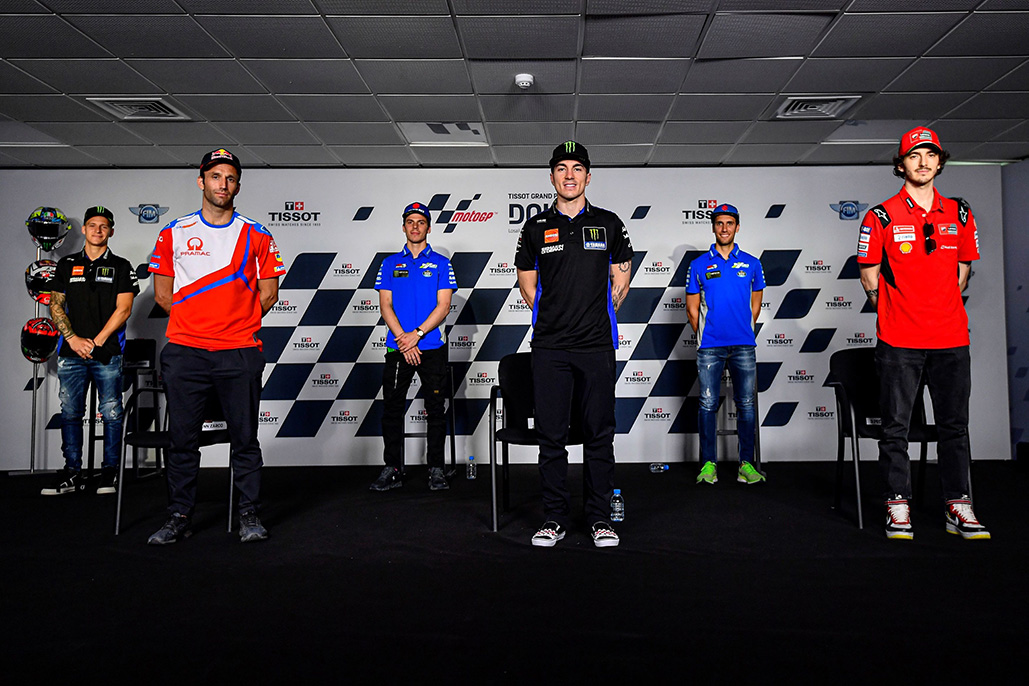 The pre-event Press Conference gets the TISSOT Grand Prix of Doha underway at Losail, with Viñales at the helm.

Maverick Viñales: “It’s never perfect, it’s difficult to be perfect on all tracks and we still have to improve, do something different this weekend. Not every weekend is the same, we saw it last year when we had two weekends in a row, everything changed a lot. So we have to be ready for every situation. But we have good potential and we’ll try to fix it if we can’t go at the maximum.

“I think all the riders can make a step, we’ll also try to make a step; it’s important to improve day by day. For sure all the riders sitting here, and the top ten, will be faster, so we will try to also be faster. And then we’ll see. I think what we could understand from the first race is that the tyre demand here is very high and we need to manage it well so we’ll work on that this weekend.”

And is it now easier to overtake with the Yamaha?
“It’s too soon to say, we just rode on one track, we need to ride on many other tracks to understand if the bike has  the right potential and consistency to fight for something bigger, but we found the bike is working well straight away, and this is something. For example for me there are points where I can’t overtake, but a few others where my bike is strong. Some strong, some weak but to understand where you can pass and what your strong points are. But I think it’s too early to talk about that because we only raced on one track and next we go to Portimao where we struggled a bit last year, so we’ll see there what improvements we’ve made in Qatar.”

Johann Zarco: “I think it’s as Maverick said, the consumption for the tyre is hard to manage, staying second and with Pecco, trying to follow Maverick, helped me a lot to be competitive to the end. Even Mir at the end overtook me but almost at the end of the last lap so I could overtake him again. Pecco I think he won’t want to lead again to save the tyres… this is the key point I think, the leader may have more problems in the second half but at the same time we need to be fast, so let’s see how to manage Sunday. Our target is to have more possibility like Maverick did to be fast at the end of the race and fight with him, or anyother rider. And be able to fight for victory and not the podium.”

Should Ducati be worried if they don’t win in Qatar?
“If we don’t get victories here in Qatar, we don’t need to be worried because we’re so competitive and if we can be in the top three all race and finish on the podium it’s a good sign also for the future. We don’t need to worry, but the target is to win and we know we have chance to do it, We have to find some solution to have the chance in the race to not struggle too much with the rear tyre.”

Francesco Bagnaia: “I think if I’m first at the first corner again I’d try to lead again! But over these days I was asking myself if it’s better to manage the tyres better with slower pace, but if I think I was going slowly, for sure Yamaha or Suzuki would have overtaken me and made their pace. Looking at the result of two years ago we were faster by eight seconds in this race, so the pace was strong and very demanding for the rear tyre for sure, and the wind which was pushing you wide and the only way to turn the bike was with the rear tyre.

“For sure it was more demanding, but looking at the data now we know where to work, and also following the Suzuki and Yamaha we’ve understood good things that for sure can help us this weekend and it looks like the forecast will be the same for Sunday with a lot of wind, so I think we’ll arrive more prepared. Never say never for the result because like Maverick said, last year in the second races it was always different. In Misano the pace was half a second faster so you don’t know, but I think we can fight again for the victory.”

And what about Ducati being worried?
“I think the same, we’ve seen Yamaha and Suzuki were very competitive like us, in the first part of the race we were very competitive and opening a gap. We were losing time in some accelerations that cost us the race. But for me we don’t have to worry, we know this track is good for us but it’s good for other bikes too, we have the possibility to win, but we have the possibility to win at other tracks too, like last year. Sometimes I was struggling at a track and Johann was fast or Jack was fast, and sometimes I was fast and the others were struggling so we know the package is competitive and we know the chance to win or finish in the top three is possible. This year the objective will be to be competitive and consistent in every situation and on every circuit.”

Joan Mir: “It was a difficult weekend because I struggled a lot to find the correct feeling with the front, I was having a lot of problems and it was making everything really difficult. Hopefully in Warm Up we found something interesting and I got a better feeling again, and I was able to make a good race The start wasn’t the best but then I started to recover positions over half the race, and then in the last laps I tried to manage it the best way I could. I overtook Pecco, and then Zarco was really good closing the gaps… and then this was the key I think for him I overtook him in the last sector but I was a bit too optimistic probably and went a bit wide at the last corner, which didn’t help to arrive second at the line…

“I expect to change the qualifying or the first laps of the race a bit, we were really strong in the last part but we also closed the gap a lot and we used more of the tyre than normally what we would have to. It will be important to start with the front group and then manage the race with them and see in the last laps of the race where we are, which is the main goal for this weekend.”

Is the Suzuki one of the best bikes still straight out the box, despite not racing in Qatar in 2020?
“It’s true but we also need to work to improve our bike. Last year we showed in the second race always good potential, I remember for example in Austria and Aragon, we always in the second races found something more, and that I think is positive to have two races for us, and I’m looking forward to it.”

Fabio Quartararo: “Honestly it was a tough race because as soon as I overtook Jack, I had great pace but felt immediately the drop of the rear tyre and I had to slow a little on the pace, but then automatically my rear tyre was spinning a lot. But I think it’s also great because in last year in that situation I would have dropped many positions but I found a new way of trying to make good laptimes, braking so hard but it was tough at the exit of Turn 6, that was one of the worst points but it’s good because we have the data of the winner from last weekend. We saw some points where I was really aggressive almost for nothing, so I will try to be a bit smoother this weekend and I think it will help a lot.”

And the same question as to Maverick – is it now easier to overtake with the Yamaha?
“I think at this track we have strong points, our drive is fast, when I overtook Jack at corner 15 he struggled to overtake me at the first corner and I think there are some points here like Turn 6 and Turn 10, where we don’t have many meters of acceleration and it’s helping us to make a move. Like from 5 to 6 is short, from 9 to 10. These are the type of corners where our bike is really strong, but to make a move from turn 3 to 4 is difficult because it’s more in the acceleration. But I’m feeling great and can make strong moves. Let’s see on the next tracks but I feel good on the front and I think it’s a positive point for our bike.”

Alex Rins: “Talking about last weekend, I think we did a good race but in the end sixth was not enough for us. We need to improve small things that I did during the race, and the target is clear I think, as Joan says… we have good pace, the machine to get to the front so let’s improve the start, because also my start last week was a disaster! Let’s improve the start and try to fight for the top positions at least from the beginning, keep the tyres and see what strategy Ducati will make because now Pecco already led one race and he knows I think the way to di it now! So let’s see.”

Is the Suzuki one of the best bikes still straight out the box, despite not racing in Qatar in 2020?
“It’s not a disadvantage, it’s true when we arrived at the track we had a good base and we were able to ride fast from the beginning but we still need to work. It’s easy to arrive at one time, but improving that time is not so easy. As Joan says, the second races for us were going well last year so let’s push at this double race. In my case I studied the race well with my crew chief to see where I’m able to improve, and I’m ready.”