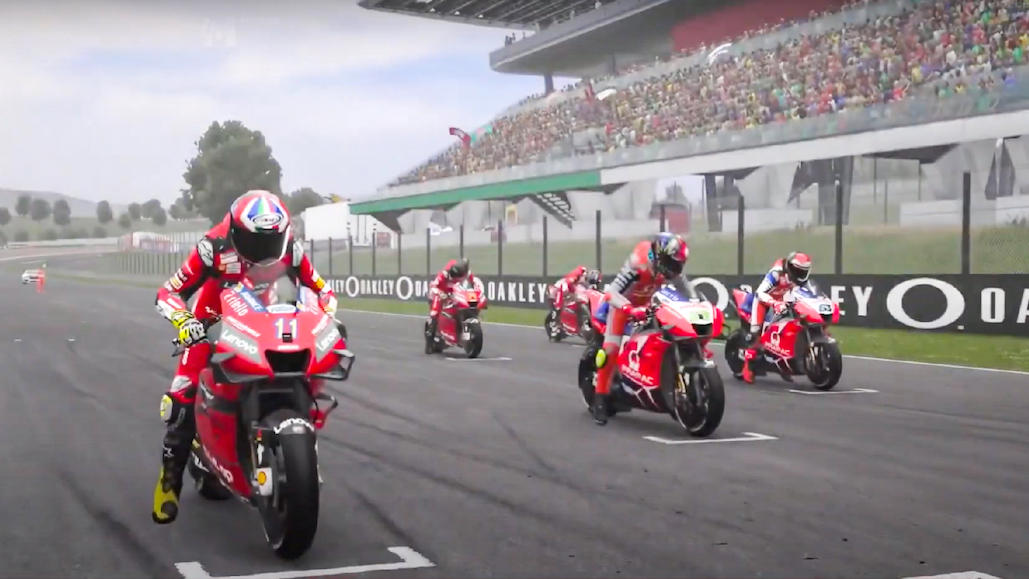 The exclusive and spectacular Ducati Motorola e-Race organized on the occasion of the Motor Valley Fest Digital ended with victory for the pro gamer Andrea “AndrewZh” Saveri.

The official Ducati Corse rider, as well as World Champion of the 2019 MotoGP eSport, therefore the favourite at the start, dominated both races conquering the maximum points (20). In second place with 9 points on a par with the third classified was Pramac Racing eSport rider Davide Gallina, “Davidegallina23”, who still placed second thanks to the best performance obtained in qualifying. Finally, with fourth place in the first race and second place at Misano, Michele Pirro ended up on the third step of the podium.

The first of the two scheduled events was held on the Mugello circuit, one of the most spectacular in the whole championship, over a distance of 6 laps in cloudy weather.

An adrenaline-fueled start between the three men on the front row, AndrewZh, Gallina and Bagnaia, saw the latter get the best and take the lead before falling victim to several crashes, the first of which entering the Scarperia curve. This prevented him from fighting for the podium, thus allowing a cautious Danilo Petrucci to conquer third position. It was a tougher race for Michele Pirro, who was also involved in an unexpected off-track excursion, and Andrea Pirillo who finished last.

The second race was at the Misano World Circuit Marco Simoncelli, one of the main Motor Valley racetracks, where 7 laps were run in sunny weather.

It was an impeccable performance by the champion Andrea Saveri, despite an initial crash, who came first with a gap of almost 30 seconds over the rest of the group. It was a boisterous session for the other players, with several crashes that repeatedly shuffled the cards on the table. The best came right at the very end with Petrucci on the final lap passing and putting in difficulty the pro gamer “Davidegallina23”, who until then had defended second position without any problems. The rider from Terni crashed at turn 4, losing the rear and giving way to Michele Pirro, who in turn had taken advantage of a crash by Gallina to gain a position. Bagnaia and Pirillo had an uphill struggle right from the start and were never involved in the fight for the leading positions.

The virtual competition, organized in collaboration with Pro2Be Esports, was a truly spectacular event complete with a podium ceremony. After a few words from Ducati CEO, Claudio Domenicali, the top three classified riders were rewarded with brand-new high-tech smartphones by Roberto Gomez, Brand and Marketing Director of Motorola, brand of the Lenovo Group, an important partner of Ducati Corse in the MotoGP world championship.

Just as in a real GP, there were also the post-race interviews with the protagonists.

Andrea Saveri – 1st place
“Participating and winning in this first event organized by Ducati and Motorola was great! Racing virtually with real riders is like a dream coming true! In addition to the fun, it was also a good opportunity to contribute to the initiative created by Ducati #raceagainstCOVID! I can’t wait for the next event!”

Davide Gallina – 2nd place
“It was an honour for me to represent Pramac Racing and race on the track with the official riders. The Ducati Motorola e-Race was a success, I’m sure the public also enjoyed it.”

Michele Pirro – 3rd place
“I am happy to have brought home the first podium of the season albeit in this particular mode. In the last period, staying at home, I’ve become quite passionate about the virtual world, which is completely different from the real world, but still requires training. Today I had a lot of fun following Andrea and Davide, who are professionals, although I hope to return soon to race on a real bike.”

Danilo Petrucci
“The world of eSports on two wheels is really fascinating. I got caught up with video games when I was a child but unfortunately in the last 10 years, I haven’t had much time to devote myself to them. The racing is quite difficult; you have to do a lot of kilometres and spend a lot of time and effort to understand how to set up the bike to the fullest. I have to admit that I prefer real races in any case.”

Francesco Pecco Bagnaia
“Andrea and Davide go much better than me, I’m learning and having fun, but they are pro riders and at the moment are unreachable. Maybe if I continue to practice, in a few years, I could reach their level, but certainly not in the immediate future. I think what we are doing is great fun and really nice, it is a growing phenomenon that allows a lot of people to get closer to our world.”

Andrea Pirillo
“I have always loved video games and in the past two months I have focused a lot on the new platforms. I trained a lot to reach an entry level that would allow me to take part in the races. I like to think about the world of eSports a bit like that of real life, because even in a virtual world the more you train the better you get.”

At the end of the races the two pro gamers, Andrea Saveri and Davide Gallina, stayed behind for a Q&A session with all the fans.

The official hashtag of the competition was #raceagainstCovid, the ongoing fundraising launched by the Borgo Panigale company in favour of the S. Orsola General Hospital in Bologna. To donate, just go to the dedicated page of the GoFundMe platform or make a payment to the account of the Hospital (IBAN: IT68E0306902480100000300027) indicating the purpose “donation raceagainstCovid”.

For those who were unable to follow the Ducati Motorola e-Race live, you can watch it on the Ducati.com website, on the YouTube channel of the Borgo Panigale manufacturer and on www.motorvalleyfest.it.