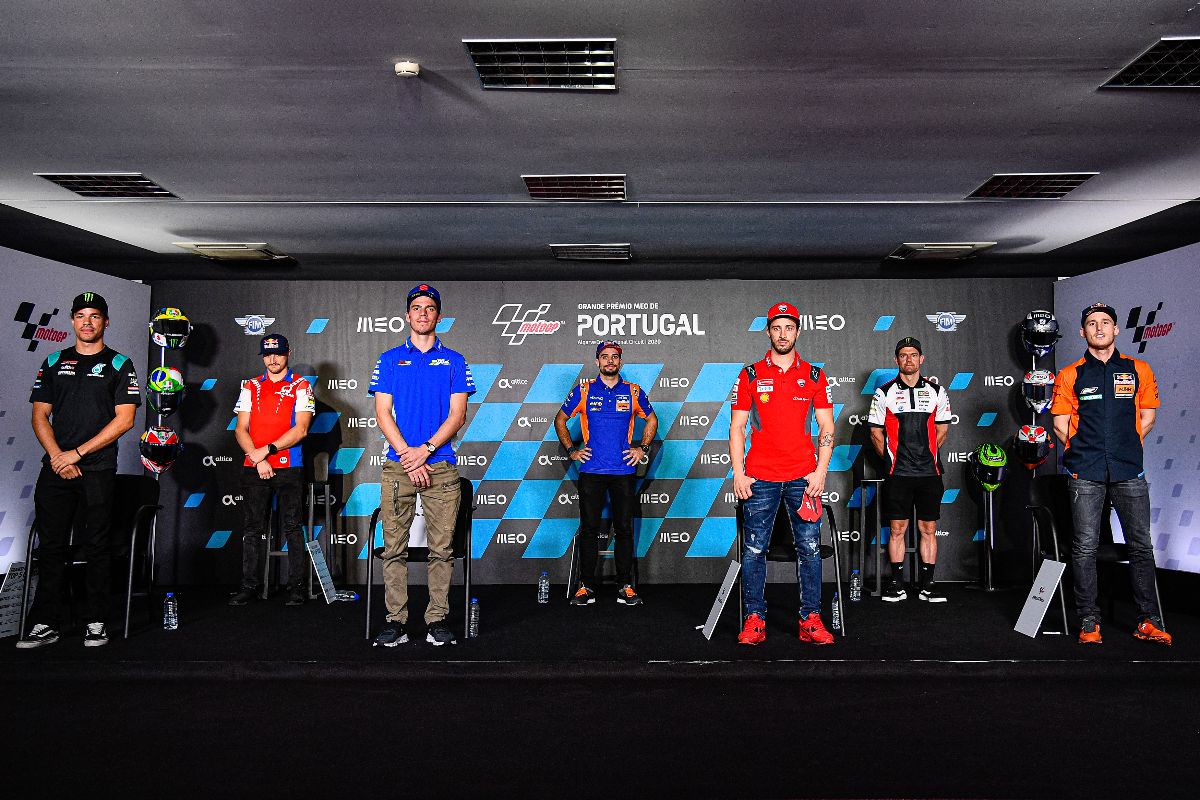 The Pre-Event Press Conference prefaces MotoGP™’s debut at Portimão – and a big weekend for many.

First to speak was Mir as he gets ready for his first race as the reigning Champion.

JOAN MIR: “We celebrated with my family and on Sunday we went to dinner, but you know not many things because today we have this weekend, the last race. We had a lot of interviews, messages, difficult one but enjoying the moment. I’m happy and now we have a mission to do here. Getting the triple crown, it would be a very good season if we don’t get it but it would be super good if we could. I’m fully focused on that, motivated also and let’s see if I can have the package to fight for victory here.

“We didn’t have this discussion already but if they ask me, I will not have any problems helping Alex get second. I think if they would ask Alex to help me get first he would do it, so it would be good from my part to do it. But it has to be the situation to help him, if not it’s not relevant.”

FRANCO MORBIDELLI: “I’m very excited and curious to see how this track is going to look like on a MotoGP bike. I raced here in 2013 and rode here a couple of months ago and yeah, I remember that it’s a very high adrenaline track and yeah, it’ll be interesting. I feel good and ok with the overall package.”

“I didn’t know those statistics until now. I will think about them maybe later. Anyway this is a great great season for me. I think I was able to discover a part of myself that I didn’t know, the serious part. The hard-working part of myself. And I liked it, when I went out on tack on Malaysia I was feeling better on the bike and be able to be more aggressive, and feel more on the bike. That gave me the chance to work better with my team and work more precisely with my crew, and I’d say a wonderful season came out. Three wins, a podium in Brno. I’m very happy overall with my season.”

ANDREA DOVIZIOSO: “This is our target, we really want to finish in a good way with a good result because we are fighting for the Championship, second/third will be quite hard because Franco is a bit too far but everything is open because we are at a new track and nobody knows a lot of details. Everything is possible, anything can happen. I am happy to be on a new track for the last round and enjoy the last race with Ducati.”

The Italian is taking a planned sabbatical in 2021 and stepping away from competition, what will he miss from the box?

“For sure I will miss Piggia. He is a really good guy and our relationship improved a lot year by year. He is one of the reasons we got important results and we fought for the title because we knew each other and his way of working suited my mentality because he is an engineer, but he is closer to the riders than most engineers and that helped us and me a lot. Working on the bike, changing the set up, he understood a lot of things for me and we were able to really make a step forward and for three years we were able to make important victories and a good result at the end of the year. I will really miss him but in the end we live very close to each other so I will enjoy the time with him more at home!”

POL ESPARGARO: “It’s a special track, a different one. It’s the last race of the season so most of us are playing for something interesting in the championship but as it’s the last race, we can enjoy a bit of racing here. Also the weather is fantastic here, at this stage of the year, to have this weather, it’s nice. Especially after struggling in the morning in the last races with the cold. Also we have Miguel here, he’s used to riding in Portimao and for sure his knowledge will be important for the KTM riders. Hopefully we can have a good weekend, jump a little in the championship because we are close enough to do something interesting.”

How does he feel about leaving KTM?

“Mixed emotions this weekend. The biggest part of this project I will miss is the people, the human part of KTM history has been super good. All the electronic mechanics who built this team from zero. There’s been very hard moments for sure but as we are showing this year, super happy ones. I’m going to miss them. Hopefully the KTM future is as bright as it looks but yeah, I’m going to miss these guys!”

JACK MILLER: “I was fortunate enough to have the test here with the Superbike prior to Le Mans in quite different circumstances. It was a lot of fun, enjoying a lot with the stand-up bike, you know, making a little race simulation with Dovi and Petrucci there for a bit it was a whole heap of fun but, no, different circumstances this weekend a bit more serious but, yeah, coming in with the confidence from last weekend and a good feeling with the bike so looking forward to taking off on some jumps around the circuit.”

And how does he feel seeing his friend Cal Crutchlow hang up his racing leathers?

“I mean I think on behalf of myself and everybody I think all we can say is thank you for everything he’s done. On and off the track I think he’s been a great ambassador for the sport he’s one of the hardest working guys I’ve ever seen in this paddock and you know a lot of the times I feel he got doubted more than other riders but you know every time he was written off he came back to prove them all wrong and the best thing about him is he is never shy to tell you that he has proved you wrong so I think on behalf of myself and everyone else we’re all going to miss him but you know he is like a bad smell, he won’t go all the way away!”

MIGUEL OLIVEIRA: “I’m very happy and excited to race at home after seven years since we had the last Portuguese GP in Estoril back then and now to have the chance, still it is a different kind of season to have a home GP is great, especially because it is the last race where I think everyone is a bit more relaxed and we can enjoy racing here. I think the fans can expect the great show because this track is very very different from what we see around the world so I hope just to get a good performance so that the fans have an extra reason to enjoy the show.”

And what about leaving Tech 3 for Red Bull KTM Factory Racing?

“I would say I have also kind of the same emotions as Pol, but I think a bit less because he’s leaving a manufacturer and I’m staying in the same house let’s say. Of course to work with that Tech 3 crew was great, we built a strong relationship in two seasons and of course it makes me sad to leave and at the same time I’m stepping in a harder job for which is to be a factory ride it and I’m not expecting seems to be easier than they are right now. I’m also filling up a spot that as you know at the moment highly ‘quoted’ because Pol has been on the podium and has been setting the pace inside the KTM and so it will be a hard job but I feel I’m ready for it and to take this opportunity to develop more as a rider and to give KTM good results.”

CAL CRUTCHLOW: “Good, I feel happy and content to come to such a good circuit. Portimao, I’ve got great memories here, I won the Supersport title at this track and I’ve got some good results on the superbike here as well. I didn’t come to the test here a couple of months back but I know the circuit, it’s not like you’re going into the circuit blind and it’s a fantastic event to be able to come to. It’s nice to have this as my last one. It’s a new track for most of the riders where I’m sure everyone will be giving 100%, it’ll suit some bikes and maybe not others. It’ll be good fun because I think it will be a good race. Different parts of the track will suit different riders and bikes and yeah, I feel good. Feel good coming into the weekend with it being the last competitive race.”

And, finally, of course, his farewell to racing…

“I’ve been privileged to work with some great people: great teams, great bikes and being here for 10 years, riding some of the best bikes in the world, its been a privilege to do that. As I’ve said before, 10 years ago I didn’t expect to do what I have done so I have exceeded my own expectations. But yeah, working with great people and great crews. I don’t think I’ve left a garage where I didn’t get on with everybody in the garage and we didn’t have a great relationship. It’s nice that’s it come back full circle and I’m going back to a manufacturer that brought me into Grand Prix. But yeah, getting some of those wins I had. Brno is probably the best one because it was my first one. I was so far back in the race at the start and managed to come through, so I’ll take that one.”

That’s a wrap from Thursday. Watch the MotoGP™ field head out on track for practice on Friday as we count down to the final showdown on Sunday, when the lights go out at 14:00 (GMT).