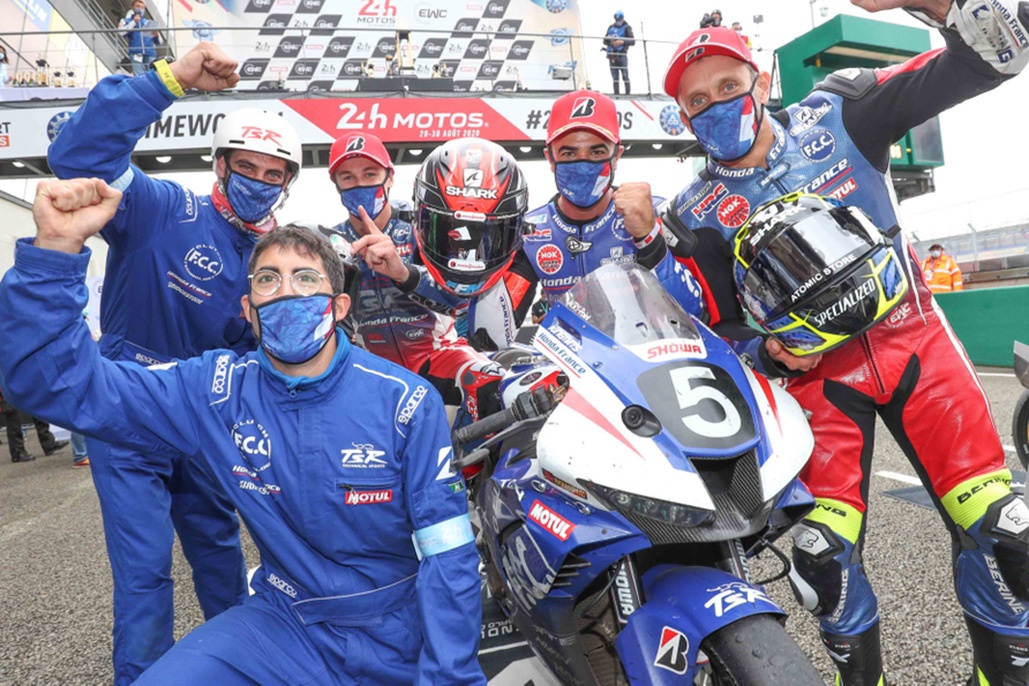 Following a crash early on in the race, YART Yamaha (Bridgestone) pushed hard to get back into the leading pack. Karel Hanika, Marvin Fritz and Niccolò Canepa finished in 4th place, 5 laps behind the winners.

BMW Motorrad World Endurance Team, solidly anchored in 5th place, lost their position after Ilya Mykhalchyk crashed at the tail end of the race. The factory BMW team were unable to cross the finish line and therefore not classified. The late-stage drama enabled F.C.C. TSR Honda France to shoot up to 2nd place in the provisional championship standings.

An amazing race
It was a thrilling and nerve-wracking race. As a result of the fickle weather and constantly changing track conditions, the teams were under pressure for the entire 24 hours. Stray showers in the final stages of the race forced the teams into some chancy tyre strategy. The tricky track conditions deprived Suzuki Endurance Racing Team of the 2nd place they had looked sure of claiming two hours from the finish. A crash made them lose their two-lap lead over Webike SRC Kawasaki France Trickstar.

The race also throws the FIM Endurance Championship open. Five of the six factory teams are grouped together at the top of the provisional standings with less than a month to go for the final, which will play out on Saturday 26 September at the 12 Hours of Estoril in Portugal. Ducati is missing from that group, despite some great performances by Team ERC Endurance all weekend long. The German team did their utmost to stay within striking reach of the leading pack at Le Mans. But they ran into a number of problems, running out of fuel, crashing more than once and experiencing technical issues, ultimately withdrawing at the end of the night with an electrical problem.

BMW win in Superstock with GERT56 by GS Yuasa
A BMW team won for the first time this season by dint of running a flawless race in the Superstock class with riders Stefan Kerschbaumer, Lucy Glöckner and Toni Finsterbusch. GERT56 by GS Yuasa’s win ahead of No Limits Motor Team and Moto Ain also throws open the FIM Superstock World Cup. Moto Ain, who finished on the podium despite multiple crashes, still top the provisional standings, but the points gaps are narrower on the eve of the final at Estoril.

Two other teams in this category lost their chance at the overall win. BMRT 3D Maxxess Nevers and Wójcik Racing Team withdrew after several crashes.

Anthony Delhalle EWC Spirit Trophy awarded to Aprilia Le Mans 2 Roues
The only Aprilia-mounted team, local squad and 24 Heures Motos regular Aprilia Le Mans 2 Roues, were given the Anthony Delhalle EWC Spirit Trophy. After Nelson Major crashed, Eddy Dupuy and Marco Boué pushed on throughout the night as a two-man team to keep Aprilia in the race. The Aprilia #15 crossed the finish line in 27th place with Nelson Major making a comeback to take the pressure off his teammates. Their combative spirit won them the trophy launched in memory of Anthony Delhalle.

With the wrap-up of the 2020 edition, raced without any fans in the grandstands, race organizer ACO and FIM EWC promoter Eurosport Events are pleased to announce the dates for next year’s event with immediate effect. The 44th edition of the 24 Heures Motos will take place on 17 and 18 April 2021.