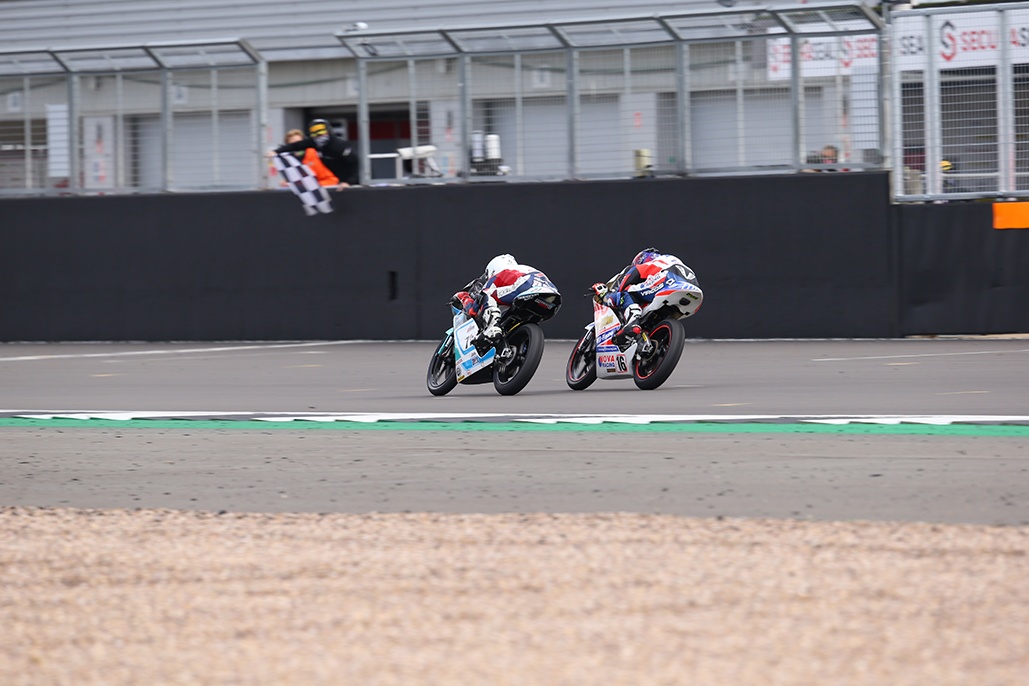 Right at the line, the number 71 beats Claridge by 0.021 as O’Shea and Bourne battle it out for third.

The first race of Round 3 for the Honda British Talent Cup certainly didn’t disappoint, with a photo finish once again deciding the winner. That winner, for the first time, was Charlie Farrer (Victoria House Academy/Mortimer Racing) as the number 71 struck to perfection and beat Harvey Claridge (City Lifting/SP125 Racing) to the line by just 0.021, with another duel deciding third as Eddie O’Shea (WAM) came out on top against points leader Franco Bourne (Franco Bourne Racing/SP125). Casey O’Gorman (Microlise Cresswell Racing) crashed out, seemingly suffering a problem and getting thrown off his Honda – rider ok.

It was O’Gorman who took the holeshot with another signature lightning start, with Claridge initially into second but then heading wide soon after; that allowing poleman Farrer to move up into P2. Next time over the line though Claridge hit back, giving us a preview of the duel that would define the fight for the win.

First though, the drama hit for O’Gorman. The number 72 hasn’t had much luck at times in the 2020 Honda BTC, and Silverstone saw him take home another zero after a strange crash took him out of the lead and out of contention only a few laps in. It also drops him 33 points of the top of the standings, but rider ok and ready to bounce back on Sunday.

That left Claridge with the lead, but Farrer remained close to the number 16 and the two had quite a gap back to the duel for third. O’Shea and Bourne were still locked together and that’s how it would remain as the laps ticked down, with the race becoming a tale of two duels to decide the podium.

As the final lap approached, Farrer had cut down some lost ground to stick himself right on the rear of the number 16 machine in the lead once again, and the plan was simple: wait. The plan also worked to perfection as the number 71 stayed glued in place and then struck at the final corner, sweeping round the outside and ahead over the line by just 0.021 to take his first Honda BTC victory. The duel just behind saw O’Shea fend off Bourne and keep third, moving himself up even closer to the leader in the standings despite some impressive moves from the number 17 – including a round-the-outside impressive sweep at Luffield.

Fifth was a solid but lonelier ride for Evan Belford (City Lifting by RS Racing), ahead of an almighty battle for sixth. Two or three abreast even round the final corner, it was James Cook (Wilson Racing) who came out on top, ahead of Jonathan Garness (Microlise Cresswell Racing), Ryan Hitchcock (Wilson Racing), Elliot Dufton (D&D Racing), Harrison Crosby (Banks Racing), Corey Tinker (GR Motosport Brent Gladwin) and Ollie Walker (Moto Rapido/SP125) as sixth to 12th was split by just seven tenths.

That’s it for Race 1, with Bourne remaining ahead in the standings but just 13 points covering the top four. O’Shea is in second five points off Bourne, with Claridge third and only another point in arrears. Farrer is the man 13 points adrift, but he’ll be aiming to cut that once again on Sunday…