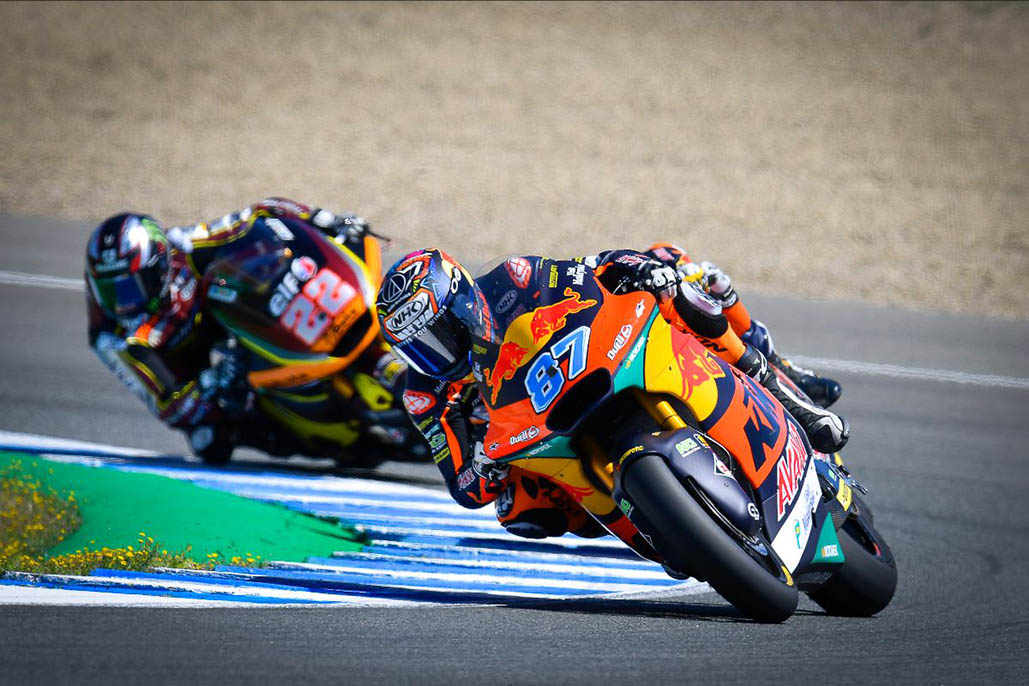 So far, there are five riders pulling clear in the standings and they’ve shared all the podium places bar one. Can Le Mans see a switch up?

After four races, there are five riders starting to make some breathing space at the top of the Moto2™ standings. But it’s been far from a predictable season, and Le Mans offers those on the chase another chance at taking a bite of the podium, victory or top five cherry. So what are we expecting in Sarthe?

Remy Gardner (Red Bull KTM Ajo) heads into Le Mans with the points lead despite his worst finish of the season so far last time out, although that was a fourth place, which goes some way to explaining his impressive position in 2021. He’s still looking for a win though and with podium form last year at the venue, will likely be feeling pretty confident of at least fighting for the rostrum once again. Can he go one better and tick off the victory box this season? Or is there still no rush to be rash when you’re top of the pile?

The one man ahead of him in 2020, however, was the man just behind him in the standings now: Sam Lowes (Elf Marc VDS Racing Team). Judging it perfectly at the front and moving through to lead after a heartbreaker for Jake Dixon (Petronas Sprinta Racing), the number 22 will be looking to at least head Gardner home. He’ll also likely have a bit more of a spring in his step in France after recovering from his sky-high DNF in Portugal to take a solid third place and re-engage consistency mode under a little more pressure. Rookie Raul Fernandez (Red Bull KTM Ajo) is only as far behind Lowes in the standings as Lowes is behind Gardner, however, so can he move forward again after running out of grip to hold onto the podium in Jerez?

Marco Bezzecchi (Sky Racing Team VR46), meanwhile, did the opposite and steamed away from the squabble for second to take it pretty comfortably by the flag. He took a podium in France last year and after a more muted opening three races, arriving back in Sarthe fresh from his first rostrum of the season is a good springboard to start getting back into the fight for the win. Speaking of which, there’s another Italian with the ultimate springboard on the way into Le Mans: Fabio Di Giannantonio (Federal Oil Gresini Moto2).

Diggia has come close to the top step before in Moto2™, but the dream finally came true in Jerez as the Italian got the perfect launch and then showed perfect poise – and speed – all the way to the flag. It was pretty much faultless and brings him back into within striking distance of the top, so can he push on from here? Sometimes, a win can unlock more than just a bottle of prosecco, and the Italian already had a podium earlier this year so it was far from a surprise to see him in the fight for glory.

From there and the five fastest riders so far, there’s a small gap back to those on the chase, so who can break the stranglehold near the top? So far, only Aron Canet (Inde Aspar Team) has done so; the Spaniard taking second place in Portugal. Can he find that form again and iron out his ups and downs? Joe Roberts (Italtrans Racing Team) is actually ahead of Canet overall though, the American with one DNF but some solid consistency otherwise, and he’s been close – rubbing-is-racingly close – to the podium this season. Never having found Jerez the best match, will Le Mans bring the American further into the fray? Augusto Fernandez (Elf Marc VDS Racing Team) is another looking for a step forward and he has podium form at Le Mans, as well as having come close to it again last season, and Ai Ogura (Idemitsu Honda Team Asia) is now in the groove after a tougher first race. The Japanese rookie has made a few waves of late getting in the mix near the front…

And then there’s also, of course, the 2020 man of the moment… for a while at least. Jake Dixon had never led a Moto2™ race before or been very close to doing so until his incredible display of form in 2020 before disaster struck, but that moment saw the Brit kick on and bounce back to greater heights for much of the rest of the season. He’s already been quick in 2021 despite still being on the comeback from his wrist injury and surgery, so will the good memories outweigh the bad? The Sarthe weather could also play into his hands, and those of Lowes; the others who’ve shown pace in tougher conditions… and cause a bit more of a headache for the likes of Raul Fernandez and Ogura.

Five riders near the top, six on the podium so far and some very fast, very eager contenders waiting in the wings promises another quality Moto2™ showdown at Le Mans. The intermediate class go racing at 12:20 (GMT +2), don’t miss it!